The larger theater of early-season football is defined and dominated by chaos. It’s not as though teams generally figure everything out in week two, especially if they played a cupcake in week one. We’re still very much in that part of the season when teams with young players at key positions are immersed in that often inevitable process of learning how to mesh as a collective whole. We’re also in that part of the season when coaches don’t know what they have… and consequently, how they need to rotate players and find certain solutions throughout their roster.

It’s true that the mere act of playing one game, no matter how challenging, gives coaches a chance to act on real information, while offering players the chance to absorb the gameday experience once again and study live game film. However, it’s hard for Michigan to compare Notre Dame to Appalachian State; for USC to compare Stanford to a Fresno State side that has fewer resources than it owned last year; for Oregon to compare Michigan State to South Dakota, and so on.

September (including, for all intents and purposes, the final few days of August) is a month defined by volatility and uncertainty. Winning and avoiding injuries are the two paramount goals of this month. As long as teams can escape each week unscathed on those two counts, they can develop cohesion and polish for the coming conference season, collecting the ingredients that go into a successful season. This is the general backdrop to week two of most college football seasons, and it very much applies to the 2014 season in particular.

The fact that Temple won by 30 points at Vanderbilt creates a backdrop to this game which was not entirely expected. Yes, Vanderbilt looked absolutely awful — not having Jordan Matthews at receiver will do that — but Temple still had to shut out Vanderbilt’s offense in a road night game. The Owls still had to go about the process of collecting seven takeaways. They still had to show that they could dominate a game despite converting only 2-of-17 third downs on offense. (That’s easily one of the most remarkable statistics from week one of the season, winning a game by 30 despite that level of third-down (in)efficiency.) Navy remains a competent, tough team — it made too many mistakes to beat Ohio State last Saturday, but it certainly pushed the Buckeyes as many expected. Yet, the Midshipmen have to know that they’re not playing the 2013 version of Temple. For all of Vanderbilt’s weaknesses, Temple certainly looks like a much-improved team. This is an early-window game to keep an eye on.

This game starts just after 9 p.m. local time in the Sun Bowl, and after UTEP won on the road against New Mexico in week one, the Miners will believe that they can push Texas Tech, which survived a 42-35 shootout against an FCS team (Central Arkansas) in week one. Kliff Kingsbury radiates positive energy and charm, but he’s been entrusted with a lot of money and responsibility. If Texas Tech wobbles here in a late-night game… well, you fill in the rest of that sentence.

These two teams, both division contenders in their respective conferences, played FCS teams in week one. We’ll find out a lot more about them this week. The power five-versus-group of five dynamic adds to the intrigue surrounding this cross-country clash. 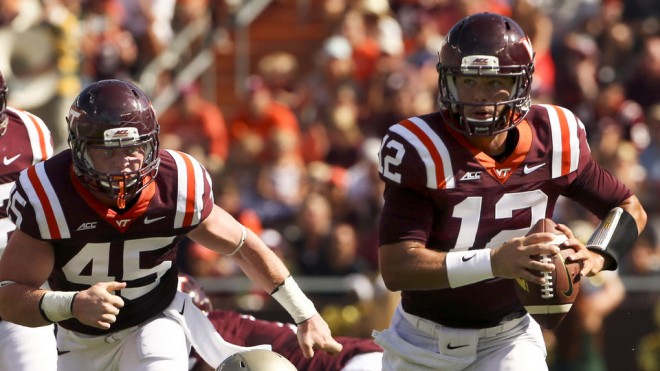 Michael Brewer, welcome to The Horseshoe. Will Scot Loeffler give you a good plan, enough to help you defeat an opponent that, without Braxton Miller, might very well struggle to score against a Bud Foster-coached defense?

If you like defense, this game should satisfy you. If you like offense, you might witness a game that will scar your eyes. Expect plenty of mistakes and shortcomings from Virginia Tech and Ohio State on Saturday, partly due to the absence of Braxton Miller, but partly due to the presence of Bud Foster on the Hokies’ sideline. Little is expected of Virginia Tech’s offense to begin with, but the Miller injury and the quality of Foster as a defensive coordinator should place an even greater premium on points in this contest. Turnovers and the ability to gain short fields should loom large in Columbus.

The Gamecocks will have a lot of passes thrown in their direction this weekend. If their defensive front can’t generate a pass rush and their secondary can’t cover the Pirates’ receivers, it will be time to panic in Columbia with Georgia knockin’ on the door, relishing the chance to pounce on a week opponent on Sept. 13.

This is the best game other than the four featured games of the week, the ones we’ll mention below. This is, quite simply, a game with genuine division championship implications in the Mountain Division of the Mountain West. Colorado is not what it once was as a program, but Colorado State still did well to pulverize the Buffaloes in the final two and a half quarters of last Friday’s game in Denver. Jim McElwain has injected fresh life into the Rams, but now we’ll see how well those Rams can climb in their corner of the country. Boise State lost the Mountain Division race to Utah State last year, and the Broncos certainly have major questions at quarterback with Grant Hedrick. However, in their loss to Ole Miss last week, the Broncos showed the physical defensive line play that was a program calling card under former coach Chris Petersen. Their defense, if it can play at that same level against Colorado State, should inspire plenty of confidence in and around the program.

It’s up to Colorado State’s offense to storm into Boise and stand up to the Broncos. If the Rams leave Idaho with a victory in their hands, new Boise State head coach Bryan Harsin will realize just how much work he has to do to restore something that’s been lost in the land of smurf turf. On the other hand, an authoritative Boise State victory will quickly reinforce the idea that the Broncos are in great hands under Petersen’s former lieutenant. Yes, this game matters quite a bit. 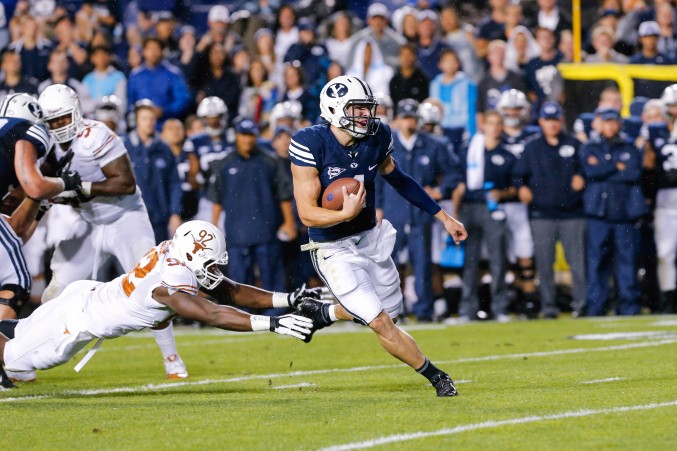 When Taysom Hill ran over, around, under, and through Texas’s defense last year, Mack Brown’s job security at Texas began to be undercut to a significant degree. Now, Charlie Strong gets a chance to “take that Hill” and show Burnt Orange Nation just how capable he is as a coach and a defensive tactitian.

The BYU Cougars know how big this game is, because they know what they have to do in order to become a factor in future College Football Playoff races.

BYU doesn’t receive the same treatment Notre Dame gets as an independent. The Cougars won’t receive the preference the Fighting Irish are (and will be) accorded in College Football Playoff competitions, because they don’t move the media or money needles the way Notre Dame does. BYU knows that since Texas is the most prominent national opponent it will play this season (UCF being second), the Cougars have to win this game and go 12-0 if they want to have any real shot at the playoff. BYU has to max out this season and then back up a perfect 2014 with a 2015 season that’s at least 11-1 if it wants to dramatically improve its level of prominence in college football, which is the only way the Cougars can become a central playoff candidate.

As much as this game means for Texas, and it means quite a lot, it means even more for BYU. You might say that the Cougars already defeated Texas last year. That’s true. However, BYU couldn’t win other big games on the road against Wisconsin and Notre Dame. This year, Taysom Hill has to show he can win away from home against a marquee opponent, one that is also dealing with injuries to important players, as TSS columnist Allen Kenney documented here. 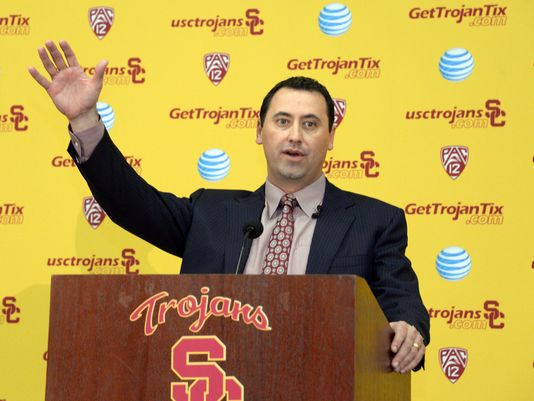 Beating Fresno State was one thing. Beating Stanford on the road? That would tell the critics that Steve Sarkisian has USC pointed in the right direction.

The Stanford Cardinal eased their way into a new era with a victory over an FCS opponent, UC Davis, last weekend. This Saturday, the Cardinal will truly discover what it’s like to play a big-boy Pac-12 opponent without Shayne Skov, Trent Murphy, and Ben Gardner. How well USC’s offense performs will tell us a lot — not everything, mind you, but a lot — about the foundation Steve Sarkisian is putting in place at his new stop. What makes this game more fascinating is that Sark and his defensive coordinator, Justin Wilcox, both gave last year’s Stanford team a good run in Palo Alto before falling just short a part of the Washington Huskies’ coaching staff. Stanford is not as good this year as it was last year, so by that measurement, USC is supposed to win.

Stanford’s schedule is brutal this season, so even if the Cardinal get out of this game alive, they face bigger tests down the road. This game is more significant for USC in its bid to finally make the Pac-12 Championship Game.

The last time Michigan went to South Bend for a night fight, Denard Robinson couldn’t throw the ball… well, unless it was into the hands of a Notre Dame defender. That reality may or may not be on Brady Hoke’s mind, but it forms a core part of the backdrop for this game even though Denard is no longer a part of the picture. Devin Gardner has to take ownership of this season for Michigan, and new offensive coordinator Doug Nussmeier is being trusted by Hoke to unlock Gardner’s evident talents. It could be that Gardner will play a decent game and not really become the reason Michigan wins or loses. However, just consider how the tenor of the season will change for the Maize and Blue if Gardner either soars or stumbles. A masterpiece would give Hoke, Nussmeier, and the entire program the belief that they’re emerging from the darkness of last season. An implosion would create the darkest of dark clouds in HokeWorld. 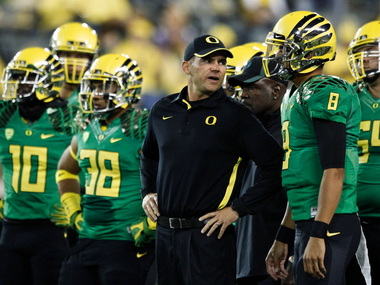 Mark Helfrich lost his team — or at least, he couldn’t win it over — after the loss to Stanford last November. This season, his last with Marcus Mariota, is Helfrich’s big chance to show the nation that he’s the right successor to Chip Kelly.

As soon as Oregon was punched in the mouth by Stanford last year on that Thursday night in the San Francisco Bay Area, the Ducks lost their verve and spirit. Oregon dragged itself through an almost indifferent November and lost not just a Pac-12 title shot, but a BCS bowl invite. Mark Helfrich has surely thought about that limp finish to the 2013 season. He also knows he won’t have another season beyond this one with Marcus Mariota. It’s Mariota who makes Oregon the national contender that it is. Helfrich therefore lives in a must-win context this season. If he can’t get Oregon to the Pac-12 title at the very least, national observers (not to mention his own fan base in Eugene) will wonder if Helrich is the right replacement for Chip Kelly.

Mark Dantonio has built the Michigan State program over time and has secured his place in East Lansing, but it was Kelly who made Oregon football what it has become. This is a game Helfrich simply can’t afford to lose, and that’s the central drama for the biggest game not only of week two, but of the September portion of the season’s non-conference schedule.