Thanksgiving weekend, which is now rivalry weekend in college football (this wasn’t always the case, at least not universally), provides the last big wave of non-conference games before the bowls. In particular, Thanksgiving weekend pits SEC East teams against ACC Atlantic teams in rivalry showdowns. Usually, the SEC has won these games, but in 2014, the ACC struck back. This was an important Saturday for the ACC — that is an unquestionably true assertion.

How much weight will this weekend carry into the future? That’s the question the Student Section’s editors discuss today.

What do you make of the SEC’s 0-4 record against the ACC this past Saturday, if anything?

Honestly, I’m not surprised. As I said on a recent podcast with the lead writers for the ACC blogsite All Sports Discussion last Tuesday, I felt the league had a good shot at winning all four of these contests this weekend.

So what does it all mean?

Simple: it means that the ACC is slowly closing the gap on the SEC. Just a few years ago, there’s no way that anyone would have expected Georgia Tech to upset Georgia or Clemson to beat South Carolina. After all, the SEC schools have dominated these rivalry games recently, winning the last five meetings in both matchups. The fact that the league won these contests and were favored in the other two speaks volumes about how much the conference has improved in the past few years. In fact, it was the ACC that set a record for most bowl teams last year, sending 11 squads to the postseason.

At the rate the league is improving, it might not be long before it’s on par with the SEC. While Saturday’s victories might not factor into the College Football Playoff picture this year, they might help the ACC schools win more recruiting battles against the SEC. If it can do that, the gap could close even more in the next few seasons. Remember: games aren’t won by the team that has the best Xs and Os, it’s usually won by the team with best Jimmies and Joes. 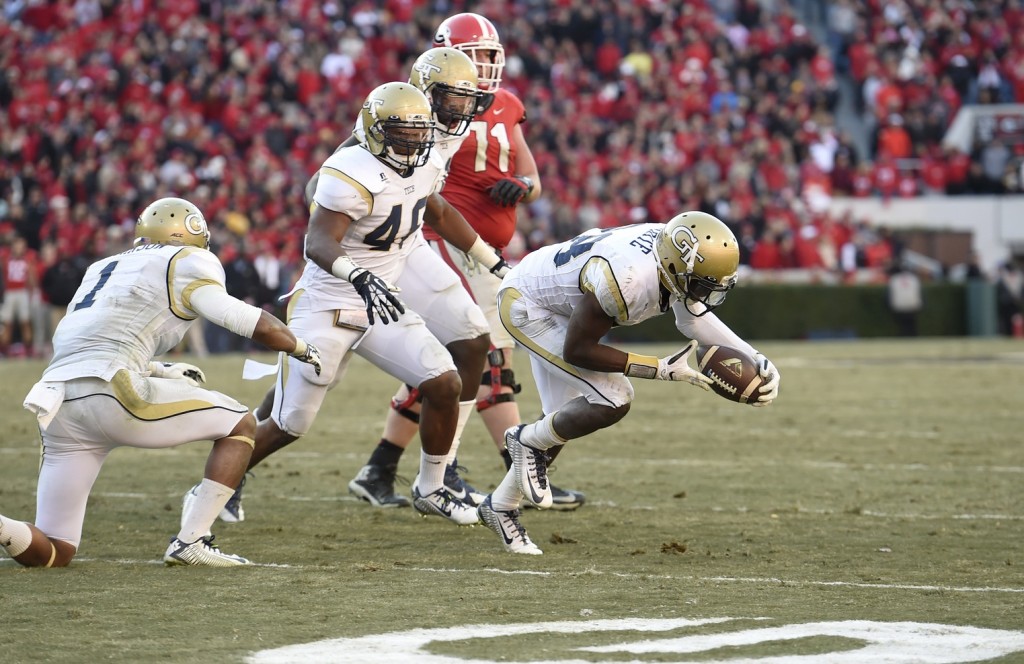 Georgia Tech beating Georgia in the Paul Johnson era is a rare event. With that having been said, the Yellow Jackets’ ability to win in Athens certainly changed the way Johnson’s tenure in Atlanta is perceived. Moreover, Tech’s win could very realistically represent an equation-changing event in the evolving balance of power between the ACC and the SEC.

The big story to emerge from this development — as far as I’m concerned, anyway — is the divisional split for both sides.

The SEC East went 0-4, which is not a way of covering for the SEC as a whole or trying to soften the blow for the SEC. No, the ACC has usually been on the short side of “SEC-ACC Rivalry Saturday” in recent years. The ACC should rightly and loudly tout what it accomplished, full stop. Let’s simply note that the ACC Atlantic won three of these four games, with Georgia Tech — the Coastal’s only particularly strong team — grabbing the fourth game.

For both the SEC and ACC, there’s a strong half and a weaker half. The SEC West and ACC Atlantic are solid divisions. The SEC East and ACC Coastal are not. The people in the ACC get tired of hearing this, and it should be said that the Coastal showed signs a few weeks ago of having three or four strong teams, but the Coastal still wasn’t very good this season. Only two teams had winning records, and one of them — Duke — looked absolutely awful in consecutive home-field losses to Virginia Tech and North Carolina.

However, having noted that the ACC Coastal once again failed to measure up, the SEC East should not be spared in this discussion. It should be seen as no better than the Coastal: Georgia could not beat Georgia Tech at home. Yes, it’s true that Missouri is certainly better than Duke, but after that, it’s a jumble in which specific matchups or home field might determine winners for teams 3 through 7 in the division. The two divisions are relatively even, which means the SEC East should hang its head in shame.

It’s necessary to note the divisional split in the ACC’s 4-0 record against the SEC because divisions have really blinded a lot of people in college football to the ways in which scheduling structures alter the fortunes — and often mask the weakness (or quality) — of various teams.

Put South Carolina in the SEC West this season, and it wouldn’t have made a bowl game. Put Boston College in the ACC Coastal this season, and the Eagles probably would have won the nine games Duke wound up winning, possibly 10. Put Mississippi State in the SEC East, and the Bulldogs might be ticketed for the College Football Playoff. Put Duke in the ACC Atlantic, and the Blue Devils might have finished no better than 6-6. 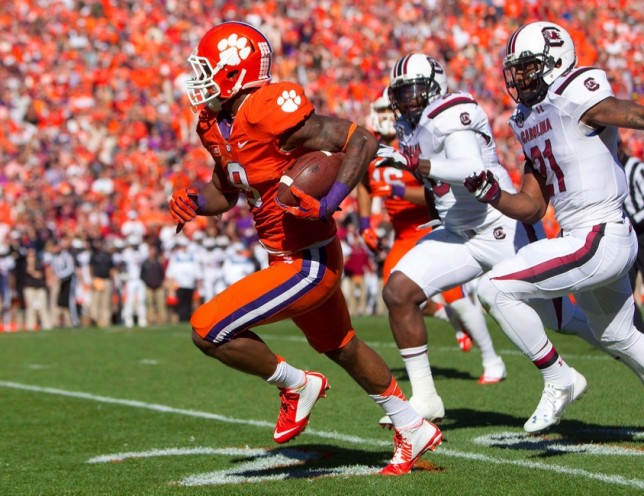 South Carolina might have finished 4-8 this season had it played in the SEC West. If you’re inclined to defend the SEC East based on its five bowl-eligible teams, you would do well to realize that imbalanced scheduling created by divisions inflates some records and drags down others. If you’re going to knock the ACC Coastal (which is reasonable), don’t spare the SEC East in the same kind of discussion.

We are so easily drawn to the final record in college football, and to a certain extent, we can always judge (and, moreover, commend, as is the case with Duke) a team based on what it did with the schedule it was given. However, let’s not use that point to then reach the unfounded conclusion that a 9-3 team is really good (at a higher level) just because it has nine wins. These 12- or 14-team conferences inevitably bring about situations in which top teams won’t play every formidable opponent. They also bring about situations in which a team in the weaker division avoids the tough divisional crossover games and builds nine wins thanks to getting a break from the schedule maker.

This is always a point worth emphasizing, which is why “ACC versus SEC” is better referred to as “ACC Atlantic versus SEC East.” There is no question that the ACC Atlantic is and has been a very underrated division in college football this season, one worthy of a lot more praise than it has received on a national level.

I honestly don’t take much from it. If we were being honest with ourselves from Week One to now, what did we really learn? The SEC East isn’t good, hasn’t been good, and shouldn’t be propped up as good. This is why the SEC, whether you like it or not, probably isn’t the best conference in the country this year.

It’s sort of hard to be the best meal when the appetizer and dessert both are mediocre. Think of Dairy Queen, after you get through the first 30 percent where they actually try to put the toppings in the ice cream.

If anyone wins, it’s the ACC versus the ignorant, because perception in college football is reality, and you can’t really deny the boost the ACC gained from its caning of the SEC in the unofficial “ACC-SEC challenge” this past weekend.

The only really surprising skin on the wall was Georgia Tech over homestanding Georgia. The rest of the games involved favored ACC teams, so essentially, they did their job.

The fact that they were all favored speaks more to the fact that we should start every season evaluating conferences on an even level rather than attaching an artificial strength to a region or conference before we bother actually seeing teams play.

Not that I expect that to happen.