Some might call it the “Battle Line Rivalry,” but veteran sportswriter Dieter Kurtenbach came up with a gem when he referred to Arkansas-Missouri as the “Ozark of the Covenant” game.

Arkansas-Mizzou is the contest most of the Student Section editors point to as the one to watch on Thanksgiving Friday. The editor on the staff who is based in Seattle naturally thinks you should be watching a Pac-12 clash instead.

This, of course, is why remote controls were invented. In the mid-afternoon window on Friday, you can do some “window shopping” in a football sense of the term.

Here’s more on Friday’s big games, before the Saturday smorgasbord:

Which game on Thanksgiving Friday are you looking forward to the most?

There’s a lot of buzz surrounding this year’s Territorial Cup game between Arizona State and Arizona, since the winner will go 10-2. It’s hard to find an ASU-U of A game in the past that meant more for both schools.

However, Devils-Wildcats won’t acquire program-changing importance for the winner if UCLA handles Stanford in the same time window on Friday.

This looks like a very interesting game. Stanford has not been the team we’ve become accustomed to over the previous four seasons. There’s no running game. Ty Montgomery is too much on an island at wide receiver, without sufficient help. Red-zone offense has been a disaster for the Trees, as everyone knows. David Shaw makes copious amounts of poor play-calling decisions over the course of a season.

Being able to see the Rose Bowl stadium in mid-afternoon light might warm your body if you live in a colder part of the country. That alone is reason to pop in for a look at Stanford-UCLA on Friday. The game will also determine whether the Arizona State-Arizona winner will claim the Pac-12 South title or not.

Yet, for all that Shaw fails to do well, he gets his players motivated and commands their trust. Stanford, after stumbling to a 5-5 record, came out with fire and vinegar against California, and could very easily unfurl another display of vintage Cardinal football against a UCLA offensive line that has not been very good this season.  This could get away from Stanford, but I ucla has not easily solved the Cardinal over time. Tucson might provide the sizzle on Friday, but Pasadena will provide the stakes.

Spend time with your families. That’s my advice. You won’t remember any of these games anyway.

That said, if you’re going to hover around the colored box because you can’t get away from it, I guess sit your “dairy aire” down for Missouri and Arkansas, the only Friday game of serious consequence.

The Pac-12 will toss up a battle of top 15 teams for the potential right to deal with Oregon in the Pac-12 title game, but you know the deal there … Oregon either wins the Pac-12 title and automatically gets into the CFB Playoff or doesn’t, and that’s it for the Pac-12.

With the Missouri – Arkansas game, there is mild intrigue. Missouri winning the SEC would be a kick to the groin for the conference, and I’m just being honest. The loss to perpetually mediocre Indiana at home will loom forever in the minds of pretty much everyone, never mind the fact that Indiana got considerably worse when Nate Sudfeld went down … but that they weren’t really that good with him in the lineup.

Whereas if Arkansas wins, that’d be three straight over then-ranked teams for the Hogs, which means that terrible goatee Bret Bielema is sporting probably will be sticking around for the long haul. It’d also mean Georgia would play in the SEC title game, and ask any Alabama fan which they’d rather wrassle with … Georgia or Missouri … and you’ll find your answer in “Missouri.”

But really, pop the television on in the background, hug your family, eat your left overs, and enjoy another year of even being able to read this stuff. 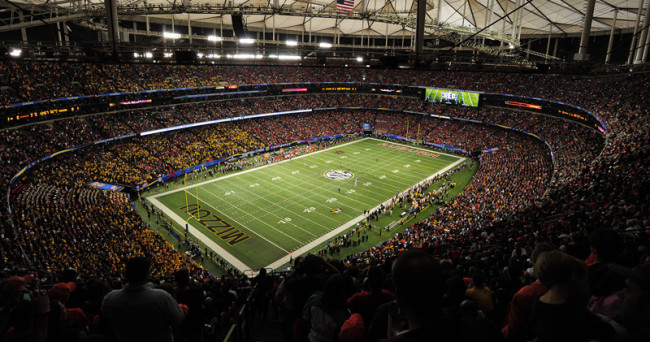 Could Missouri really win back-to-back SEC East titles and make it back to the SEC Championship Game? The Tigers are 60 minutes away from doing so — the red-hot Arkansas Razorbacks stand in their way.

While I echo Bart’s sentiments about sharing time with your families, I encourage everyone to watch the Arkansas – Missouri contest.

At the risk of sounding like a college football version of Dick Vitale, I’m excited about this game, baby. The Razorbacks are the hottest team in football right now, shutting out ranked opponents in back-to-back weeks. Similarly, the Tigers enter this contest on five-game winning streak, needing a victory to repeat as the SEC East Division champion.

What’s unique about this matchup is that will appeal to non-SEC fans and SEC fans alike. Those that want to see the SEC well-represented in the College Football Playoff will cheer for an Arkansas victory, as it would further bolster the SEC West’s already strong reputation while providing the division champion an opportunity to play a top-10 foe in Georgia for the conference championship. On the other hand, those fans that don’t like the SEC will pull as hard as they can for Missouri, since a Tiger win in the conference title game could potentially eliminate the league from postseason contention (e.g., Ohio State would get the nod over Missouri since it beat Indiana, whereas the Tigers lost to the Hoosiers earlier in the season).

Imagine that, Urban Meyer and the Buckeyes pulling for Bret Bielema.