TSS editors Bart Doan and Matt Zemek are joined by contributor Ryan Palencer in this survey of five bowl coaches that have a lot to prove.

1) This is probably a little bit of a stretch from the “something to prove” standpoint, but I’ll take a flyer on Western Michigan’s P.J. Fleck. Only 34 years old, Fleck has orchestrated one of the great turnarounds in one year at Western Michigan. Fleck gained fame for the popular “Row the Boat” mantra, which was basically his verbal diagram for the sacrifice and continuity needed from all levels of Western Michigan to succeed. Well, it happened.

Now, Fleck finds himself probably one year away from being a guy who is mentioned and linked to every big job in college football on an annual basis, due to the success at WMU almost overnight after last year’s 1-11 campaign. More so than him doing the Polar Plunge with a program slogan painted on his chest, Fleck has shown the energy and enthusiasm that winning requires, and a win over Air Force on a national stage in the Famous Idaho Potato Bowl would make Fleck famous in the eyes of many an athletic director at a program with a capsized vessel.

2) Barney Cotton, Nebraska: Cotton was named the interim coach at Nebraska in the wake of Bo Pelini’s rather surprising firing, one of the many former Huskers brought back into the fold after the divisive Bill Callahan era and the subsequent hiring of Pelini. Cotton is one of those guys about which you can say, “Well, if he wanted a head coaching job, he’d probably have done something about it by now,” but you never really know how a guy will react to that opportunity until he gets it.

A school in a tenuous coaching situation (not necessasrily with an open job, but one that could come open in a year or two) could easily look at Cotton if Nebraska plays well and put him on a list … either for the present or the future. One immediate example that comes to mind is Ruffin McNeill, who stepped in after Mike Leach was fired at Texas Tech, coached a bowl game, and is now the head man at East Carolina and doing just fine there. Not that Cotton and McNeill are the same guy, but it’s an applicable comparison to show how interim coaches in bowl games can accelerate their career paths in a hurry.

3) Al Golden, Miami. You could perhaps make a case for Frank Beamer at Virginia Tech, but the sense here is that no ACC coach occupies a hotter seat heading into 2015 than Golden. The man who managed to build Temple into a respectable football program now has to begin to show that he can restore the Hurricanes in the aftermath of NCAA penalties flowing from the Nevin Shapiro mess. Golden hasn’t produced a single season in Coral Gables that is worthy of the buzz his name has generated in recent coaching searches, especially the one at Penn State. The 2015 season feels like a make-or-break moment for him, and so if he wants to head into that campaign with an appreciable degree of optimism, his 6-6 team needs to drum another 6-6 team, Steve Spurrier’s South Carolina Gamecocks, who have mastered the art of blowing a two-touchdown fourth-quarter lead this season. Winning this game would not be a Golden moment… but it could set one up next season. 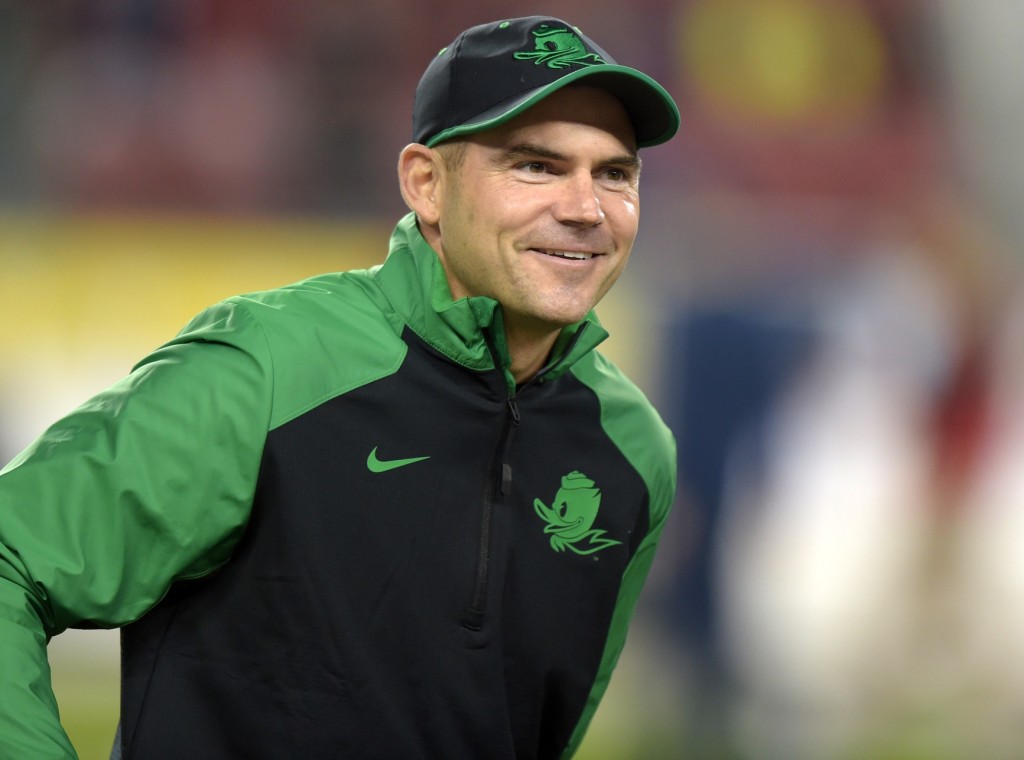 4) Mark Helfrich, Oregon (shown above). A coach who leads his team to the first College Football Playoff has already proven something, but of the four coaches in the playoff, Helfrich is clearly the No. 4 seed. Moreover, it’s quite apparent that Helfrich has had the great good fortune of inheriting Marcus Mariota from Chip Kelly. A player with Mariota’s combination of finely-honed skills and ample gameday experience will make life a lot easier for a coach at a powerhouse program. Against Florida State, Helfrich’s X-and-O acumen will be tested as never before. If Florida State thumps the Ducks, Oregon fans are definitely going to enter 2015 with a fair share of doubts. They might publicly claim otherwise, but they’d know that if Helfrich fares poorly in the Rose Bowl, a post-Mariota world could generate more uncomfortable questions than UO fans might like to admit.

This is Mark Helrich’s moment of truth. You might think that’s laying it on thick. #FSUTwitter and many others would probably disagree.

5) Art Briles, Baylor. He has made no secret that he feels Baylor was slighted by the committee and deserves to be in the playoff. Outside of TCU, Michigan State will be by far the best team the Bears have played all season. A loss to the Spartans will prove the committee right. What also has to be considered with respect to Briles is that his curious complaint about a lack of Southern presence on the football committee made him stand out in a not-very-good way. It’s perfectly fine for Briles to have lodged a complaint about being snubbed, but a lack of Southern representation on a committee led by the athletic director at the University of Arkansas? That dog never did hunt, and it never will.

Baylor plays this game in its home state, and in a stadium where it plays Texas Tech each season. Briles can’t complain about a lack of favorable geographical placement in this contest. If he loses not just a big game, but what amounts to a semi-home game, the Bears — torched by UCF in the 2014 Fiesta Bowl — are going to be labeled as a team that can’t get it done when playing high-profile teams outside the Big 12. Accordingly, if the Big 12’s best team in each of the last two seasons can’t do anything in the bowls, that’s not going to reflect well on the league. It’s time for Briles to deliver against Michigan State.