Countless columns of mine start out like this, but there was this Seinfeld episode once upon a time where Kramer had a hideously annoying red head girlfriend who goes and heckles Jerry at one of his shows and throws him off a bit.

Jerry, incensed, plots to partake in the ultimate comedian’s revenge … going to her job to heckle her. So he does. And it doesn’t go well. She ends up getting her pinky toe severed by a street sweeper.

If only the above example could happen in sports. Every year, media pushes the bounds of personal ethics and disregards the families of coaches for five minute hit-man pieces about guys being on the “hot seat” or some degree of seat temperature that all indicates how close they are/should be to getting fired.

Oh, how sweet it would be if a group of coaches threw a few back and did a “media hot seat” list where they basically write a column listing members of the media who either are unethical, ask dumb questions, or just flat out suck at their jobs on an annual basis. Consider that list a living document that could be altered daily.

Fast forward to one Brady Hoke, Michigan football coach, who has found himself in the cross hairs of media hot seat guy. Hoke has regressed every year in his tenure at Michigan, and despite it being appreciably better than the regime he replaced, it’s not enough to ward off the vulture columnists.

Read after me: whatever seat Brady Hoke is sitting on is room temperature, and that’s because all seats are room temperature until you sit on them. Not hot, not warm, not anything.

Hoke has responded the way Hoke responds to stuff like this, mostly shoving it off with his “who cares, gotta do what you gotta do” style. As reporters like to joke about people’s jobs, one suggested at B1G media days that Hoke’s middle name might be “hot seat” with all of the attention his job security is getting. 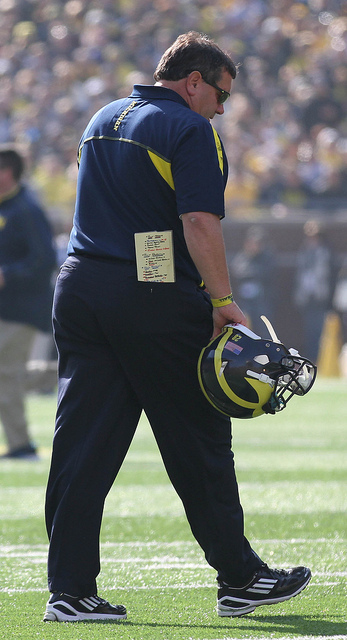 Despite dogged questions from hungry media looking for a reaction, Brady Hoke will keep on trucking in Ann Arbor.

Hoke probably doesn’t care, nor should he. He said he doesn’t really care about what other people think, said he wants to win, called on the successes graduating of his players.

Short of a losing record, Hoke isn’t going anywhere anytime soon. David Brandon, for all the financial accolades he’s helped bring the athletic department, has his legacy of sorts directly tied to Hoke.

Add to that the fact that Michigan went out and spent handsomely on Doug Nussmeier after the offense sputtered miserably under Al Borges in 2013, and you realize that Nussmeier wouldn’t have left Alabama if he thought the next year he’d be out looking for a new job because the head man was packing up his office.

Hoke, in many ways, has been a victim of his own success. The 11-2 first season in Ann Arbor had everyone going from “yay, we’re happy to be back in bowl games getting slaughtered by Mississippi State” to “well, we probably should play for the BCS title every year.”

Much of the national kvetching is accelerated by the simultaneous massive success of Ohio State and Michigan State … Blue’s top two rivals … but worrying about what other people are doing instead of focusing on yourself is a really crappy way to go about living life, and ultimately an unsuccessful one.

So 7, 8, 9, or whatever wins, it doesn’t matter. Hoke is coming back. Eventually, like anything else, if an adequate job is not done long enough, changes are made. But the seat isn’t hot, warm, lukewarm, or any other temperature.

Now, if we can just get him to write a column …