In this week’s attempt to make sense of the just-completed college football weekend, there are several fairly easy calls to make in terms of identifying weaklings and teases across the country.

Virginia Tech is a tease, given its loss to East Carolina. So is USC, at least as far as 2014 is concerned, though maybe not in the future under Steve Sarkisian. The Trojans were thrashed by Boston College at the point of attack on Saturday. When Boston College shows Stanford how to finish drives, it’s clear that USC survived Stanford because of the Cardinal’s mistakes, far more than the Trojans demonstrated superiority over and against the Trees.

There were more easy verdicts to render at the end of Saturday’s play: After seeing what Nebraska did to Fresno State late Saturday night, it’s quite clear that USC’s beatdown of Fresno State said a lot more about the losing team than the winning team.

With Missouri bossing around UCF and Penn State barely scraping by Rutgers, it’s clear that Penn State’s close win over UCF in week one was not some great breakthrough; it was merely a good win against a flawed team that is much more impotent without Blake Bortles and Storm Johnson. (Imagine that!)

When you continue to assess the landscape after week three, however, this constantly challenging part of college football punditry becomes very murky and complex when another group of teams is considered. That cluster of teams just happens to be in the South.

The results of the past weekend have set the stage for each of the next two weekends in college football, with profound implications for two divisional races and the national competitions that will flow from them.

WILL CLEMSON’S LINE GROW A SPINE IN TALLAHASSEE? 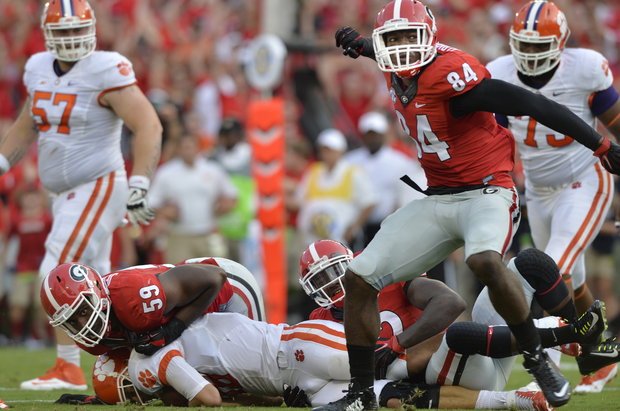 Will scenes such as this one from the Clemson-Georgia game be frequently replicated in the Clemson-Florida State clash this Saturday? Clemson’s offensive line was blown away by Georgia’s front seven… the same front seven that was whacked by South Carolina in week three. There’s no bigger key to the ACC game of the year than Clemson’s ability to hold up in the trenches against the Noles’ banged-up defensive line.

Here are the questions you have to wrestle with after week three:

Is Clemson quarterback Cole Stoudt that shaky as the main field general for the Tigers’ offense, or was South Carolina quarterback Dylan Thompson that good?

Was Clemson’s decisive loss to Georgia created substantially by the fact that the game was on the road, or was South Carolina’s victory over Georgia the product of the fact that it was a home game for the Gamecocks?

Was South Carolina’s defense noticeably better against Georgia compared to Texas A&M because it made genuine improvements, or was South Carolina’s forward step the result of Georgia not having a quarterback who could perform anywhere close to the level Kenny Hill attained versus the Gamecocks? As a follow-up question, did South Carolina survive Georgia simply because the Dawgs and Mark Richt don’t use the spread passing system favored by Kevin Sumlin?

Most of these questions are hard to answer, but regardless of your ultimate responses, everyone in the college football community can agree that the actual answers — the ones that will be revealed on the field — carry a lot of significance in the ACC Atlantic and the SEC East.

The biggest game of week four is Saturday night’s ACC Atlantic title bout (especially with Louisville losing to Virginia) between Clemson and Florida State in Tallahassee, Fla. If Georgia’s defensive line was able to so thoroughly demolish Clemson’s offensive front in the second half of that non-conference clash two weeks ago, the Dawgs’ subsequent game against South Carolina should give Clemson fans much cause for concern heading into Doak Campbell Stadium. It’s true that Florida State’s rash of injuries along its defensive line (against the cut-blocking tactics of The Citadel) could leave the Seminoles in a somewhat weakened state against Clemson. Yet, if Georgia’s defensive front was really as weak as South Carolina made it look, then the Tigers — blasted by that same Georgia front seven — are in for a world of hurt against Florida State.

The ACC Atlantic takes center stage in week four, so it deserves to get most of the ink in this week’s test of the “Is Team A good or Team B not so good?” challenge, represented by the Price Is Right pricing game you see in the cover photo for this piece. However, it’s worth ducking in a quick word about a week-five game that looms very large in a different division: the SEC East.

Missouri-South Carolina is the second of the three biggest SEC East games of the year. Georgia-South Carolina has come and gone. Georgia-Missouri will be massive when it arrives. On Sept. 27, though, the clash of the two Columbias unfolds between the Mizzou crew and Steve Spurrier’s Gamecocks. Very simply, will South Carolina’s defense continue to get better as the season goes along, or will the passing acumen of Missouri quarterback Maty Mauk expose the Gamecocks’ secondary in much the same way that Kenny Hill and Texas A&M managed to do?

Think about that question for week five. Meanwhile, it’s time to wonder whether Clemson will be up for the challenge against Florida State in week four.

So ends this first review of week three in the 2014 college football season.