Week six does not disappoint at all.

The SEC West alone gets a feature-level throwdown in each of the three main broadcast windows — one in the early window, one in the mid-afternoon window, and one in the night window. Yet, there are a number of high-profile clashes in other conferences as well. It’s a delicious Saturday, a day so great that Major League Baseball has only two of its four division series competing with college pigksin.

If you’re still new to The Student Section, here’s the basic component of this viewer’s guide: Games are rated according to watchability and likely quality. A few brief notes follow after the TV listings. 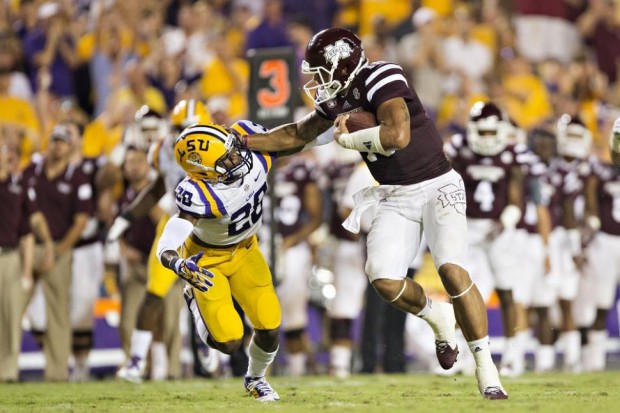 Mississippi State? In a featured game? In the best game of a specific viewing window? Yep.

1) Texas A&M at Mississippi State, ESPN — There are plenty of big games in other conferences this Saturday, but let’s underscore one very important point: The SEC West, whether you think it’s overrated or worthy of all the hype, gets three showcase games this weekend. It’s important for the College Football Playoff Selection Committee to see just how good these teams are… and aren’t. As a fan, you should share that interest if your favorite team isn’t playing in the same time window. Aggies-Bulldogs is the first five-star game in the noon Eastern time slot this season.

2) Ohio State at Maryland, ABC — Maryland’s a decent team at this point, and the Terrapins get the chance to be elevated to “Big Ten contender” if they can pull off the upset here. Ohio State plays its second road game in the state of Maryland this season (Navy being the other). This is a good option if you have a second television in the house, or want filler during A&M-Hail State commercial breaks.

3) Virginia Tech at North Carolina, 12:30 Eastern, ESPN3 — This is a huge game for two struggling teams. It’s also eye-catching because it’s a contrast in profiles. Virginia Tech has a hard time passing the ball and scoring; North Carolina has a very hard time playing defense of any kind. This might be a sloppy game, but it won’t be dull.

4) Florida at Tennessee, SEC Network — Missouri and Georgia are currently the teams most likely to win the SEC East, but the winner of this game stays in the conversation. Besides, it’s Florida-Tennessee. Not bad for a fourth option in the early window.

1) Alabama at Ole Miss, CBS — College GameDay finally visits The Grove. Ole Miss gets its big moment in the spotlight. Alabama faces its first truly significant test within the SEC. Other than that, there’s nothing attractive about this contest.

Expect another nail-biter between the evenly-matched teams from Stanford and Notre Dame this year. Will there be controversy at the end or not?

3) Oklahoma at TCU, FOX — TCU was a subpar team last season… and it still gave eventual Big 12 champion Baylor a full four-quarter test at home. This game figures to go down to the wire, or very close to it. It should be riveting.

4) Baylor at Texas, ABC split-regional broadcast — The first half should be quite interesting. The second half might not be.

5) Wisconsin at Northwestern, ESPN2/WatchESPN — How good are these teams? Learn more about them in a different sort of “college education.” 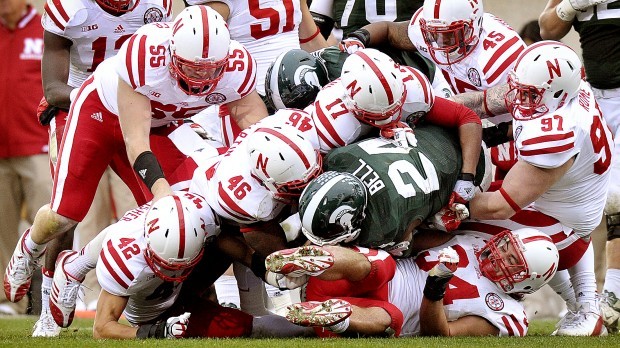 The SEC West might own the whole of October 4, but the Big Ten owns the night, as Nebraska and Michigan State take center stage.

1) Nebraska at Michigan State, 8:10 p.m. Eastern, ABC — Ameer Abdullah versus Pat Narduzzi’s defense is worth the view alone, but Huskers-Spartans is quite significant within the twin contexts of the Big Ten race and the College Football Playoff. It’s a better watch, on paper, than this next game:

2) LSU at Auburn, 7 p.m. Eastern, ESPN/WatchESPN — This game’s history says that nothing ever comes easily for either team. Yet, if you were to size up these two sides, you’d have to give Auburn a solid edge. Maybe LSU makes this game interesting, but at least on paper, Nebraska-Sparty is a bigger college football event on a national scale.

3) Arizona State at USC, 7:40 Eastern, FOX — UCLA ran all over Arizona State on Sept. 25. The Sun Devils have to find a way to bounce back in this game, especially on defense. USC’s offense needs to be able to exploit all of ASU’s weaknesses. This is an intriguing game which should also be fairly entertaining. ASU’s lack of a healthy Taylor Kelly is what keeps this game third in the night window, preventing it from eclipsing LSU-Auburn for second on the list.

4) Miami (FL) at Georgia Tech, 7:30 Eastern, ESPN2/WatchESPN — It’s not going to be the best football you’ll see in the night window, but it’s a very significant game in the ACC Coastal Division.

5) Memphis at Cincinnati, 7 Eastern, CBS Sports Network — The most interesting game in The American to date.

1) Utah at UCLA, 10:30 Eastern, ESPN/WatchESPN — Does Utah use the loss to Washington State as a wake-up call? Does UCLA relax or refocus after the big win against Arizona State? This could be a blowout, but it’s worth following the progress of UCLA, one of the nation’s most important and intriguing teams in 2014.

2) California at Washington State, 10:30 Eastern, Pac-12 Network — If this game doesn’t provide at least 80 points and 800 combined passing yards, it will rate as a disappointment in terms of entertainment value.

3) Boise State at Nevada, 10:30 Eastern, CBS Sports Network — Can Boise State tie its shoelaces on the road? There could be a train-wreck component to this game, especially for Bronco fans, but national viewers interested in following the entirety of college football will want to pay at least some attention to this game.

* If you like watching games for their potential to be disastrous, check out Michigan-Rutgers at 7 Eastern on Big Ten Network.

* Vanderbilt-Georgia (4 Eastern, SEC Network) and Texas Tech-Kansas State (7 Eastern, ESPNU) are two examples of games that looked a lot better either last season or before the start of this season, but pack little punch in the present moment.

* Here are the games that didn’t seem like worthwhile views before the season began, but have turned into interesting options based on what has happened in the first month of play:

1) Texas A&M-Mississippi State, mentioned above in the noon window

2) Ohio State-Maryland, also mentioned above in the noon window

3) Memphis-Cincinnati, mentioned above in the night window. Memphis continues to play well enough to be a team worth following if you have the chance.