Welcome to The Editorial Section, otherwise known as a roundtable discussion among The Student Section’s co-editors. Matt Zemek, Terry Johnson, and Bart Doan tackle issues of interest to college football fans. In this edition, we look at various components of the playoff landscape: the favorites, the possibilities of a surprise, and the expected (lack of) fairness in the College Football Playoff system.

Q. Which four teams will qualify for the inaugural College Football Playoff?

Terry Johnson offered his answers in a stand-alone piece on Monday at The Student Section.

The short answer is Florida State and three teams that will be trivia question fodder in 10 years. Sounds callous, but honestly, ask yourself who the two starting QBs were in the first BCS championship game. It probably will take you a minute to recall it.

The longer answer is Florida State, the SEC champions, the Pac-12 champions, and probably one of the Big 12 and B1G champions. Look, college football isn’t the NFL or NHL. It’s opinion-laden and politically charged. It behooves the opening season to feel as inclusive and exciting as possible on a national level to get it off and running.

If you’re dissatisfied with this answer and are looking for direct names so they can appear on message board posts that say, “This idiot from (insert website here) put (insert team here) in the four team playoff? The bacteria floating in the crick in the back of my house knows more about college football than these guys!”, here you go:

FSU, Oregon, Michigan State, Alabama. As you were.

Anyone who has followed my work over the years knows that I like to wait until after one appreciably challenging game to assess each of the contending teams in the Football Bowl Subdivision. This outlook on college football is captured in the concept of the “week-one revision, reaffirmation, or rebuttal” of a prevailing preseason thought. Let each team face one test — not three, not six, not eight, just one — before a sea of summer guesses can be shoved into the realm of “legitimate possibilities” or, alternatively, “mistaken inclinations.”

I have long been uncomfortable with the notion of picking teams before a season starts, just because the reality of assigning greater likelihoods to certain teams’ chances of playing for the national title is precisely what has poisoned the well for college football seasons. Preseason poll rankings — which have affected the composition of title-game matchups in the past — are a cancer on the sport. Preseason predictions about national title or playoff teams do not agree with me.

Yet, I realize that commenting on college football is a prediction-driven thing. You want predictions? Florida State, Alabama, Oklahoma, and Ohio State. 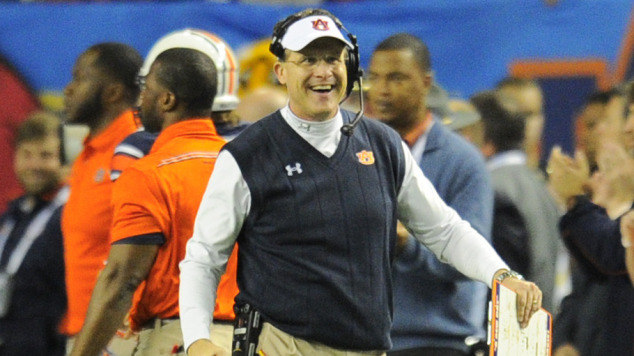 Everything had to go right for Auburn to make a dramatic one-year transition from outhouse to penthouse. Can another team possibly make that quantum leap in 2014?

Q. Which team will come out of nowhere to contend for a playoff berth as Auburn did last year?

If you don’t mind, go into the laundry room, open up the washer, and find the biggest wet blanket you can for me so I can toss it on this answer, which is, “absolutely no one.”

Auburn was a perfect amalgam of timely coaching hire, glut of underperforming talent, pixie dust, Hail Marys … the prayer kind and the football kind… and fortunate failings around the Tigers from teams that needed to fail.

Go look at the last-place teams in college football from last year. Not happening for any of them. If you’re looking for a prediction with fewer shots of Old Crow in your 7 Up than last year’s suggestion of Auburn would have been, take a flier on Ole Miss and Southern California. Both fit the profile of teams with top-shelf talent capable of competing with anyone, but not actually expected to do it on that level.

Yet, how likely did it seem that Auburn would be playing for a crystal football in 2013-’14?

If – and it’s a BIG if – there’s one team that’s capable of pulling off a similar run this season, it’s Florida.

Make no mistake about it: no one is going to pick the Gators to win the SEC this year. After all, UF closed out the 2013 campaign on a seven-game losing streak, including an embarrassing home loss to Georgia Southern. And just like Auburn in 2012-13, the Gators play against one of the toughest schedules in the country, including games against Alabama, LSU, Georgia, South Carolina, and Florida State.

All of those squads will begin the season in the top 15.

While it doesn’t seem very likely that Florida could emerge from the brutal schedule with a 4-1 record, the beauty of college football is that anything could happen. Given the string of horrible luck the Gators endured last season, it would only make sense that things turn around this fall.

It’ll be interesting to see how UF fares with a healthy Jeff Driskel playing in new coordinator Kurt Roper’s system.

Will a team rise from the depths Auburn touched in 2012 to become a contender the following year? It’s highly unlikely. Strictly in terms of offering a few examples of a team that could retrace such a trajectory in 2014, Arkansas, TCU and Northwestern would qualify. To be clear, if we really are talking about a 2013 Auburn-style example, we have to take a team that failed to make a bowl game at the very least. Yet, would you trust Arkansas, TCU or Northwestern to fight past the top teams in their conferences? No.

A more realistic possibility is if a 6-6 or 7-5 team from the past season could turn itself into a contender. Think of Michigan with Doug Nussmeier as the new offensive coordinator, having replaced Al Borges in a make-or-break season for Brady Hoke. The odds aren’t good, but those are some teams to think about in terms of a surprise national title contender. 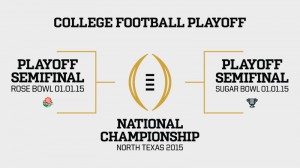 The introduction of semifinals before a national title game? Very, very good. The process by which the four College Football Playoff teams will be chosen? That’s not likely to be as satisfying or clear-cut for all parties involved.

Sorry folks, but the concept of a mythical national champion will still exist under the College Football Playoff.

That’s not to say that the new system isn’t an upgrade over the BCS, which failed as often as it succeeded. After all, the College Football Playoff doubles the size of the field, which makes it far less likely that a deserving team will miss out on the opportunity to play for a crystal football.

However, it does not eliminate that possibility. With five power conferences and only four slots available, one league champion won’t qualify for the bracket every season. That number could increase if the Selection Committee chooses to give more weight to strength of schedule than conference championships.

Whichever way the committee decides to go, the team that misses the cut will undoubtedly claim that it’s the national champion, especially if it wins its bowl game by a wide margin.

That means the concept of a mythical national champion – much like the memory of Al Bundy’s four touchdowns in one game – will continue to live on.

Yes, as in “both parts of the question above” are likely to emerge, at least to some extent.

The more precise way to answer this question is that while college football might not arrive at a “true” national champion, the sport will have a “tru-er” national champion. That might be a small difference to many, and for good reason, but it is a difference.

The College Football Playoff, whose Selection Committee has a celebrity component but not any analytics experts or Chris Fowler types, is set up to fail. Yet, with that having been said, we are purely guessing right now if we think the committee is going to elevate one criterion or multiple criteria over others. We’ll all be in a better position to assess this issue in early December.

Here’s what’s undeniably good about the new system, regardless of any other deficiencies it possesses: For the first time in college football history, a national championship game will be contested by two teams that:

A) are coming off a layoff of no more than a week and a half, give or take a few days;

B) just did play a bowl game or its equivalent;

C) had to win their way into the national championship game, as opposed to being (politically and/or systemically) selected for the game.

That last fact is consistent with a truer national champion, a team that will have to pass two postseason tests — one on long rest, one on short rest — to lift the trophy.

There’s plenty to dislike about this setup, especially if strength of schedule is disregarded. Winning your way into a national title game, though? That’s the gem of this system.

Big Foot, Faun, Bloody Mary, Mila Kunis being cast as Catwoman, college football national champions … all myths, one of whom we’d all like to see come true: the Catwoman thing, obviously.

One thing you don’t see when the BCS Championship or any college football “title” game was blasted on television was the NCAA text branded into whatever logo was fit for the year, unlike the NCAA (everything else) championships. That’s because college football comes about its champions by having impure opinions determine who plays for titles, as opposed to definitive on-field results having the final say. That will never change, and thus it will always be in the class of Nessie rather than Nestle (which is real). Which is fine.

All that’s going on here is deck chairs being moved around on the Titanic. You just have a more watered-down regular season and a different set of folks with a different name putting on their hooded robes, grabbing candles, and going into their locked underground dungeon to secretly vote for college football championship contenders. It is what it is.