Even though they’ve only played 41 games in the series, Michigan and Notre Dame have created one of the best rivalries in college football. The rivalry started in the late 1800s when Michigan taught Notre Dame how to play football. Since that time both teams have laid claim to 11 national championships.

Notre Dame has decided to end the rivalry, and this year’s game will be the last in the series (at least for now), so there are a lot of bragging rights on the line when the Irish host the Wolverines. Michigan has won 6 of the last 8 in the series, but the two teams have split the last two.

Let’s go back in our time machine and take a look at one of the more recent matchups from this rivalry. One of the interesting aspects of this game was that both teams wore throwback uniforms… 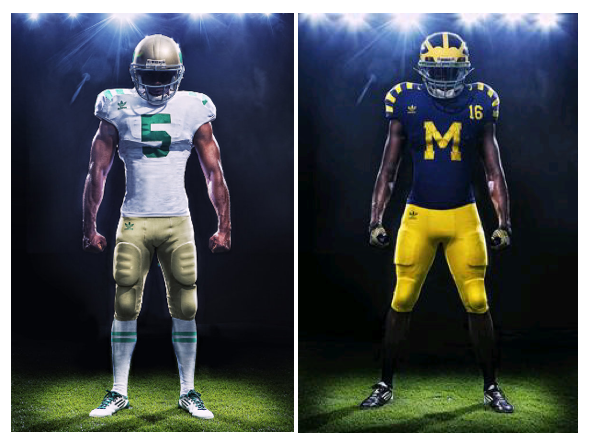 Another was that it was the first night game in Michigan Stadium history…. 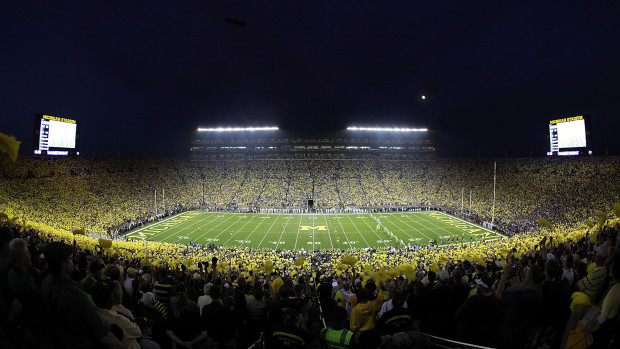 And oh yeah, it was also Brady Hoke’s first game in this rivalry as the Wolverines’ head coach. Notre Dame’s Brian Kelly entered this game with an 0-1 record.

When these two teams met in 2011, Notre Dame was reeling as it had just lost a three-point game to USF in which it turned the ball over five times. On the other hand, the Wolverines were untested as they ran over Western Michigan by 24 in their first game.

Notre Dame started this game out just like it drew it up in the locker room. The Irish followed an ideal script by bolting to a 14-0 lead at the end of the first quarter and then building a commanding 24-7 lead.

Michigan was struggling: Through three quarters, only one of its nine drives had ended with a score and none of the drives had extended beyond four plays.

That would all change in the fourth quarter, but it was a play near the end of the third quarter that set set everything into motion for the Wolverines.

From his 17-yard line, Michigan quarterback Denard Robinson rolled out without blockers and was immediately under fire from the Irish defense. As he was being grabbed around the feet, Denard launched the football 25 yards downfield to Junior Hemingway, who was streaking across the field. Hemingway caught the ball on the Michigan 35 and ran it all the way down inside the Irish five yard line. Three plays later, Michigan tried to run the ball up the middle, but the tailback fumbled. A heads-up Robinson picked up the ball and easily scored as the Wolverines pulled within 10 points and started to make this a ball game.

On the next drive, Notre Dame and Tommy Rees went three and out and gave the ball right back to Denard, giving the Wolverines prime field position after a 25-yard punt. Five plays later Denard hit Jeremy Gallon to pull the Wolverines within three points.

After trading turnovers (for Notre Dame it was a heartbreaking fumble by Rees in the red zone), the Irish got another three and out and Michigan took over with 2:16 left in the game down three points. The Wolverines needed just five plays as Denard hit Vincent Smith for 21 yards on a fantastic throwback screen that saw Smith weave his way in and out of Irish defenders into the end zone. With 1:12 left in the game, the Wolverines led for the first time.

With time as their enemy, Notre Dame responded. Rees drew a quick pass interference call and then completed two passes to get the ball down to the Michigan 29. Rees then hit an open Theo Riddick, who backpedaled into the end zone as the Irish reclaimed the lead with just 30 seconds to go in the game.

This one was all but over.

After an incompletion, Denard let it fly… and hit a wide-open Jeremy Gallon on the sideline. Gallon took the ball across the field and out of bounds on what ended up being a 64-yard gain.

Eight seconds remained and Michigan was knocking on the door at the Notre Dame 16-yard line. Would the Wolverines try a field goal to push the game into overtime?

Denard threw the ball into the corner of the end zone and Roy Roundtree went up and got it for the game-winning catch, as Michigan overtook Notre Dame, 35-31, in one of the most exciting games in recent memory.

Why would anybody want to end this rivalry?