The 2014 college football season has — as everyone predicted — vaulted Mississippi State to the forefront of the national title chase entering the month of November. TCU, West Virginia, and Kansas State all have a better chance than Oklahoma of winning the Big 12, another prediction the entire pundit class nailed as well. Kentucky is better than South Carolina — commentators from coast to coast were on top of that one from the start, way back in late August.

Yes, it’s been that kind of season.

Only now is November upon us.

Buckle up, as the editors of The Student Section look ahead to this most meaningful month.

We’re joined once again by TSS columnist Allen Kenney, who jokingly refers to himself as “college football’s finest mind,” but actually isn’t very far from the truth.

The season is about to hit the month of November. What, in your estimation, is the most unsettled and uncertain on-field aspect of the season — in other words, something other than the selection committee’s thought process — heading into this momentous month?

It’s a topic that’s been talked about to the point of overkill this season, but that doesn’t mean it’s the wrong answer to this question: the SEC West.

Mississippi State beat LSU before the Tigers figured things out and matured on both sides of the ball. The Bulldogs beat a Texas A&M team that has turned out to be a fraud. Yes, Mississippi State’s defense thoroughly outplayed a Gus Malzahn-coached Auburn offense, showing why the Bulldogs have earned the right to be seen as the top team in the country. Yet, we can all look at the schedule in November and see that MSU has to visit Alabama and Ole Miss. There’s still a lot to be learned about the Bulldogs.

What applies to Mississippi State also applies to Ole Miss. We’re going to find out about the Rebels on the first night of November against Auburn. We’re also going to learn more about Alabama and Auburn when they play the remaining Mississippi schools on their schedule, followed by the Iron Bowl itself at the end of the month.

The point to emphasize about the SEC West is that Mississippi State and Ole Miss are not accustomed to this situation and the pressure it brings. The SEC West season has itself represented a plot twist, so one can only wonder how many plot twists are left in November.

What’s that smell? It’s the smoky aroma of chaos, wafting through the air in the Deep South. 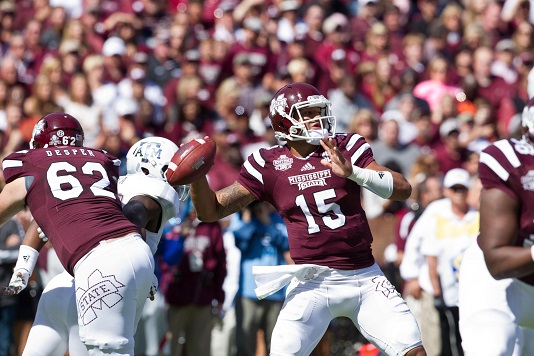 How will Dak Prescott handle the combination of national championship and Heisman Trophy pressure that’s about to come his way? That’s just one of several questions lingering over the SEC West and, accordingly, the remainder of a college football season that hasn’t followed a neat and tidy script.

No one wants to be the person that answers a question with more questions, but this situation actually calls for it. After all, there’s so much that we don’t know, and we’ll have to rely on the month of November to sort it out for us.

For example, what’s going to happen in the SEC West? Will one team win the division outright or will the teams beat each other up and produce a two-loss champion that needs to use several tiebreakers to determine the winner?

Will the same thing happen in the Pac-12 South and the ACC Coastal (aka the #4And4ForAll Division)? Could a three-loss team actually capture the division crown?

What about Notre Dame? Will the Irish survive two West Coast road trips in the month of November to put itself in position to play for the national championship?

While this list isn’t all-inclusive, it does present a number of things that aren’t even close to settled yet. I can’t wait to watch it unfold this month.

Can Florida State keep it together?

I’d favor the Seminoles on a neutral field over every team in the country. They have the best player in college football in quarterback Jameis Winston and as talented a roster as anyone.

Yet, that doesn’t change the reality that FSU has been teetering on the brink of disaster all year. Aside from the all the noise around Winston, the ‘Noles just haven’t played with the same edge as last season.

FSU has to go to Louisville and Miami between now and the end of the season, so there’s still a little meat left on the bone. Maybe a loss is in the Cards for Thursday night?

With the whole playoff thingy, plus not knowing what refuse the selection committee will throw out there … or maybe it won’t be refuse … it’s not exactly the bottom of the Long John Silver’s box where all those little things that instantly look like they’ll require an angioplasty if you eat them hang out.

Things seem very settled. An SEC team is getting in; Florida State will get in if it wins out and its toughest spots are behind the Noles; a Big Ten team is getting in; the last bid is sort of hanging out there depending on what happens with the Big 12 relative to the Pac-12.

I suppose if something looks fringe-messy, it’s the Pac-12. Oregon is the clear-path team to make the playoff if the Ducks win out, but that’s not guaranteed. Their old foil, Stanford, awaits this weekend.

Then you’re looking at the other side of the bracket and seeing Arizona State and Arizona, both of whom seem to be non factors nationally for some reason when they shouldn’t be.

One could make the argument that the Pac-12 is the nation’s deepest conference still, and in doing that it almost demands that its champion should get respect, but the Pac-12 isn’t like some other conferences who can have a non-brand name school surge to the top one year and shoot up the rankings almost immediately.

So suppose Oregon loses again or especially Arizona State runs the table: you’re left debating a team whose only loss came sans its starting quarterback (Taylor Kelly). Truthfully, a lot of how the Pac-12 narrative goes forward will depend on how ASU plays Notre Dame.

Wipe the Irish off the face of the landscape, and it’ll be measured (unfairly, mind you) against how Florida State just slipped by them. It’s hard to tell if the playoff committee will do the same, which is what matters.

As for Arizona, if it runs the table, shouldn’t it get in? They Wildcats would likely have beaten Oregon twice, plus Arizona State and UCLA. Utah exists in there too, because save for a head-scratching loss to impotent Washington State, the Utes would be unbeaten and at the top of any playoff discussion.

Alright, I’ve convinced myself … maybe things aren’t all that settled. They’re not “freshman college girl home for the first time on fall break” unsettled, but they’re not crystal clear out west either.