As a head coach, Will Muschamp has faced his former head coach Nick Saban only once. That didn’t go so well for Florida, as the Gators lost 38-10 to an Alabama team that would win the national championship later in the 2011 season. That was Muschamp’s first season. Muschamp is now in his fourth season, but he’s still searching for consistency.

Despite gigantic expectations, Alabama has been a model of consistency. Over the last six seasons, the Tide have won at least 10 games every year and have an overall record of 72-9, plus a conference record of 42-6. The fan base expects Alabama to win every game, but that’s simply not going to happen.

Last week, Florida survived Kentucky in triple overtime and might not have won if it hadn’t received the benefit of a controversial play-clock no call. Florida will travel to Alabama on Saturday as a 14.5-point underdog and will also be looking for its first win against a Top 25 team since November 24, 2012.

Will Jeff Driskel be up to the task?

The only thing consistent about Driskel’s performance in his college career is that he’s been inconsistent. So far this year, he’s been much better in the second half of games than he’s been in the first half. He is completing just 54.7 percent of his first-half passes with zero touchdowns and one interception. In the second half he’s completing 76.3 percent of his passes and has six touchdowns against zero interceptions. Alabama struggled with West Virginia’s offensive tempo, and Kurt Roper, Florida’s new offensive coordinator, will look to push the Tide defense. However, Driskel has to make the passes to keep the Tide on its heels and the clock moving. Against Alabama, he’s going to have to come to play early, or this game could be over before he starts to perform. 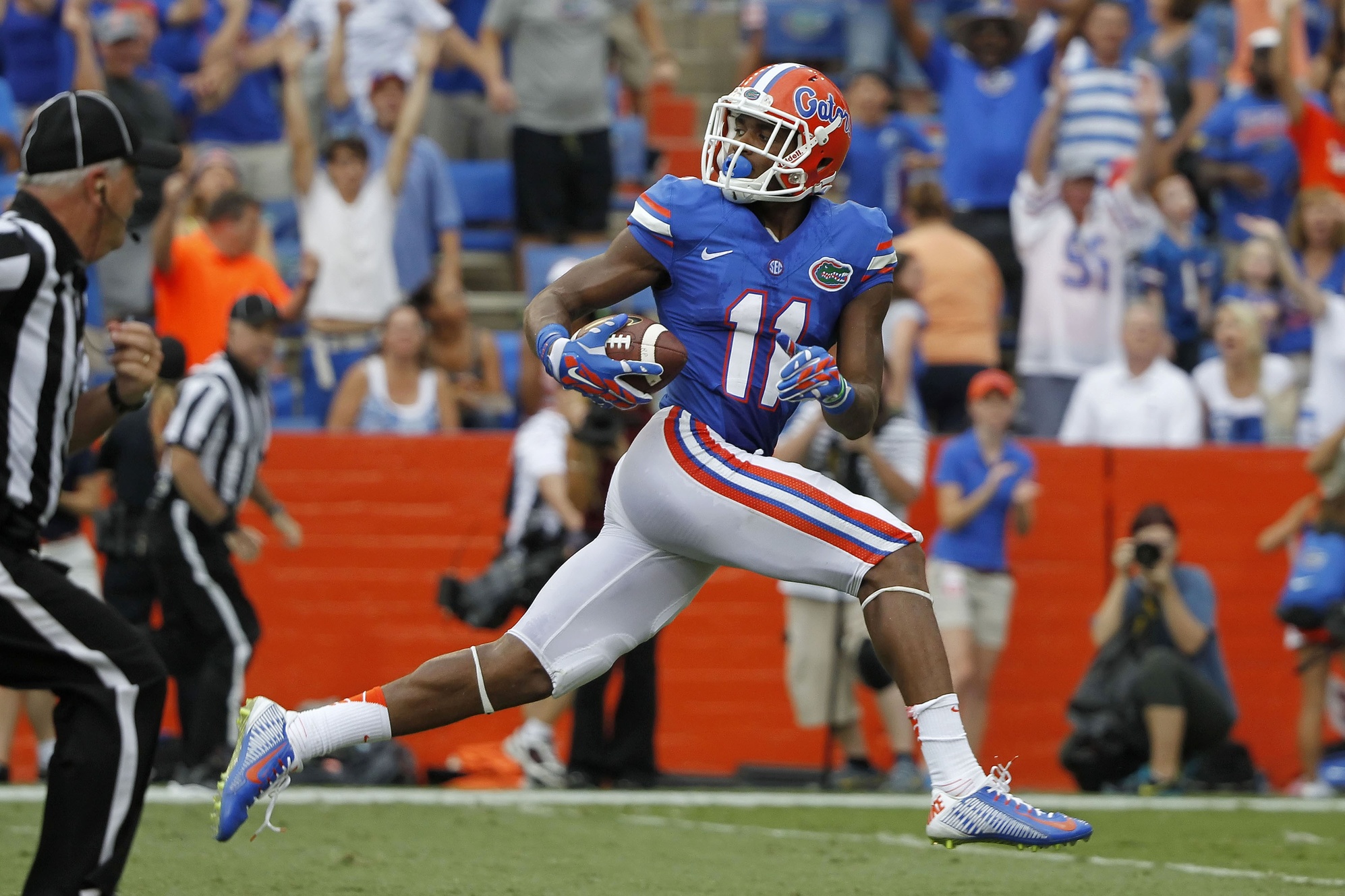 Florida hasn’t had a receiver catch over 50 passes in a season since 2009. Robinson is already 40 percent of the way there after just two games. The sophomore caught six balls for 123 yards in the blowout of Eastern Michigan and, more importantly, he caught 15 for a startling 216 yards against Kentucky. Florida has been missing a go-to receiver that can help keep defenses honest and also come up with a big play when it’s needed. Robinson’s performance against Bama will go a long way in deciding if the Gators can hang with the Tide on Saturday.

Does the Florida secondary have a chance to contain Amari Cooper?

Amari Cooper has been on an absolute tear in 2014. He’s leading the nation with 33 receptions and is third with 454 receiving yards. Yeah, that’s right, an Alabama receiver is leading the nation in receptions. Against Kentucky, the Florida secondary played well at times but it also gave up some big plays. If the Gators can’t keep Cooper under wraps, it could be a long day for them.

Florida has to solve its red zone woes

Two games is a very small sample size, but Florida has struggled to get the ball in the end zone once it has entered the red zone (and the Gators were among the worst in the nation in 2013). Florida is doing a good job putting points on the board in the red zone (94.74 percent), but it is putting the ball in the end zone only 50 percent of the time. This is where Matt Jones (221 yards rushing) and Kelvin Taylor have to establish themselves. Florida needs to do a good enough job running the football against the Bama defense and has to be balanced enough that the Tide will respect Florida’s offense to pass or run.

Putting it all together

In just two games, this Florida team has shown flashes of brilliance, but it has also shown a lot of the same issues it struggled with just last season. In their third game of the year, in a hostile environment, the Gators are going to have to put it all together if they want to win this game. From Driskel coming to play early, to Demarcus Robinson continuing his great play, to preventing Cooper from hitting the big play… it has to come together for Florida this weekend.