The Michigan job will open up soon, but the Florida job is now officially up for grabs. A highly interesting coaching carousel will spin in Gainesville, where Florida athletic director Jeremy Foley will try to maintain a very specific pattern: He failed to hire the right successor to Steve Spurrier, as Ron Zook fell on his face. However, Foley rebounded with Urban Meyer. Foley failed to find the right replacement for Meyer, but if Florida’s AD can hire the right successor to Will Muschamp, the Gators will be back on track.

What should be Jeremy Foley’s first choice as Will Muschamp’s replacement at Florida?

Let’s be honest: finishing in the middle of the pack in the SEC East simply isn’t going to get the job done at Florida. If the Gators are going to compete for a conference championship every season, they need an experienced head coach with a proven track record of winning, regardless of the circumstances.

Make no mistake about it: Stoops is arguably the best coach in college football today. In his 15 seasons at Oklahoma, the Sooners have finished first or second in the conference 12 times, including 9 BCS bowls and a national championship (2000). In addition, he has a 103-27 mark (.792) in Big 12 play, highlighted by a 21-9 mark against archrivals Texas and Oklahoma State.

He also has a 3-0 record against Florida State.

It’s tough to argue with those results, which is why Jeremy Foley should spare no expense and lure Stoops away from OU. Given Stoops’ competitive nature, he’d likely embrace the challenge of coaching against some of the top minds in the college football on a weekly basis. 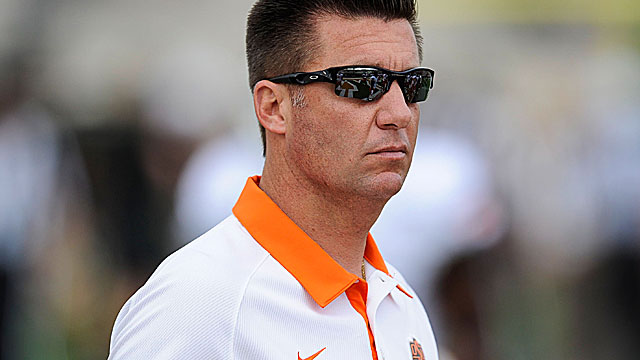 It’s easy to look at Oklahoma State’s difficult 2014 season and think that Mike Gundy’s stock is falling. However, OSU was a completely different team with J.W. Walsh at quarterback, good enough to push Florida State to the limit on Aug. 30 in Arlington, Tex. If Gundy can push an elite Florida State team at Oklahoma State, imagine what he could do with Florida’s resources.

There are so many ways in which to examine this particular topic, which is why it’s particularly fascinating. There does not seem to be a slam-dunk choice, but there does seem to be a clear path Foley needs to follow.

Florida definitely needs an offense-first coach, someone whose concepts and overall understanding of offense will lead the Gators back to a level of Urban Meyer productivity and get top recruits excited about playing quarterback and wide receiver in Gainesville.

We have seen it at Baylor. We have seen it at TCU. We have seen it at Texas A&M. We have seen it at Auburn. Programs can be revived or renewed quickly with an aggressive and modernized approach to offense, particularly with an awareness of the need to embrace spread concepts and a faster tempo in some combination. Yes, Florida State shows that you don’t have to be a member of Team Tempo to dominate — you can just get the best players, give them basic concepts with plenty of built-in options, and allow them to do their thing(s). However, for many programs, there is a need to adopt a newer approach to offense, and Florida is in a position to recruit the level of talent which can enable such an offensive system to flourish.

Dan Mullen has certainly done a great job this year, but Mississippi State’s offense has actually looked clunky and overmatched in recent weeks. Rich Rodriguez has Arizona at 8-2, but the Wildcats needed a Hail Mary and then, this past Saturday, a Joe Pisarcik-like fumble from Washington (the Huskies would have won if they had taken three knees in the final 1:40) to stay alive in the Pac-12 South race. Rodriguez’s offense at Arizona has actually been contained on a regular basis this season, if you look past his win-loss record.

The best choice? Mike Gundy. Texas did not make a serious play for him. Jeremy Foley certainly could if Gundy is willing to listen. As long as Foley has a good, long talk with Gundy about the defensive coordinator position — ensuring that a top candidate would be pursued and ultimately hired — Gundy would very likely make Florida a big-hitter once again in the SEC.

One more note about coordinators is relevant here: When a head coach is hired, the athletic director is not just hiring one man. He is hiring a man with an expectation that certain coordinators — maybe not Candidate A, but certainly Candidate B or C — will be pursued and ultimately secured. Regardless of Foley’s list of candidates, he needs to make sure that the composition of his staff, especially the balance in emphasis between the head coach and the “opposite coordinator” (the one with a focus different from the head coach if the head coach is not a “generalist” or delegator), is healthy and appropriate.

Don’t just focus on the head coach here — if Florida does go for an offense-first coach, the Gators and Foley need to make sure said coach can pay top dollar for the best defensive coordinator available.