Thursday night, the Kansas State Wildcats defeated the West Virginia Mountaineers, 26-20, but in many ways, this latest Big 12 battle of considerable consequence was not won by the winner so much as it was lost by the loser. Kansas State rushed for one yard on Thursday. A total of 18 penalty flags littered the field in Morgantown. Kansas State gacked a chip-shot field goal, played subpar red-zone offense, and committed two turnovers.

Bill Snyder, entirely in line with his personality and outlook, had this to offer after the game:

#KSU ends game in victory formation. Bill Snyder afterward: "Probably as undisciplined as I can ever remember. We really didn't play well."

How did Kansas State win on a night when it did not perform to the standards put forth by its accomplished head coach? West Virginia did a much better job of failing.

The Mountaineers committed four turnovers, for one thing. Second, despite their defense’s fine showing — the WVU defense has performed far better than a 6-5 record could ever suggest — the Mountaineers found ways to give away this game on offense (three turnovers) and special teams (one turnover of a most baffling nature). Of all the dumb ways to forfeit a possession and give an opponent a short field, having a punt returner watch a bouncing ball hit his shin — frontally, not from behind — has to rank near the very top of the list. West Virginia has one of the elite placekickers in the country in Josh Lambert, but punt returns and kick coverages have been abysmal for the Mountaineers all season. In game 11, nothing has been fixed, and to be more blunt about it, the ‘Eers regressed, given the enormity of the blunders they made on Thursday.

Purely in terms of the quality of football on offer, the Big 12 did not enjoy a good night on Thursday. However, a separate discussion emerges from Kansas State’s win over West Virginia: Is this result what the Big 12 wanted?

The short answer: It might be… but we’ll have to wait until Thanksgiving night to get a better idea of the situation. Then we’ll see about Dec. 6.

There are two ways to view this result as far as the Big 12 is concerned, particularly as seen through the lens of a possible Baylor-TCU tie at 11-1 overall (8-1 in the Big 12) after the conclusion of the regular season.

Viewpoint number one: This is good for TCU and bad for Baylor, generally bad for the Big 12. The Horned Frogs thumped Kansas State, a team that should enter Dec. 6 with a 9-2 record and losses against quality opponents. Kansas State is enhanced by this win, but at the cost of the diminishment of West Virginia, now a 6-5 team. Baylor’s loss to the Mountaineers just got worse, not better. Baylor must crush Kansas State at home on Dec. 6 in order to leave a strongly favorable impression on the minds of committee voters. Unless or until that’s done, however, this is a plus for TCU.

Viewpoint number two: This is good for TCU, but it’s hardly a crisis point for Baylor, and it actually sets up a very big opportunity for the Big 12 on Dec. 6. The logic here is just as valid as the logic advanced in viewpoint number one. TCU surely benefits from seeing Kansas State win and seeing Baylor’s one loss take a hit, but if Baylor does indeed hammer Kansas State, the Bears will not lose ground as a result of KSU’s victory in Morgantown. The opportunity for the Big 12 on Dec. 6 lies in the possibility that Kansas State and Baylor will play at the very end of the season. An early-November matchup can lose centrality in the mind’s eye for any human being. The committee, though, will get to see Baylor play a resume-enhanced KSU team in a spotlight-level game. If both teams play well and Baylor prevails, that’s going to leave a very strong impression, one that could carry if Ohio State wins in a less-than-convincing fashion in the Big Ten Championship Game.

What we’re ultimately left with, though, is uncertainty — not because of any metrics or advanced stats, but because Jeff Long said this past week that his committee is not projecting conference championships right now. Once conference championships enter into the mix, the playoff rankings we’ve seen the past few weeks could take a different turn. The committee has not done many smart or encouraging things over the past few weeks, but it could very well turn out to be that the committee has simply been milking the drama to be found in these Tuesday-night revelations, getting TV ratings and publicity far greater than in the BCS era. The committee might be headed on the road to ruin, but it could also be the case that Jeff Long is and has been pulling our chain. We have to wait and see if conference titles — which would help Baylor in an 11-1, 8-1 tie with TCU — become as paramount as many influential figures have said they would be. 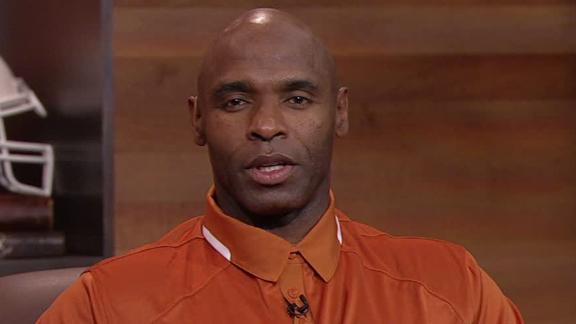 This is the man who could create a major turning point in the Big 12 season and the College Football Playoff drama at large.

In the end, TCU and Baylor and Kansas State fans, you need to focus on next Thursday night: TCU visits Texas in what now looks like a very challenging game for the Horned Frogs, compared to a month ago. Texas is rounding into form, and Charlie Strong has that program headed in the right direction.

It’s odd, but it’s true: Texas, the iconic program in the Big 12 and its foremost power broker — one of the backroom juggernauts in collegiate athletics — is the team poised to play spoiler or season-maker for programs that, 25 years ago, were impoverished and largely out of sight in college football. Baylor and Kansas State fans need to root for Texas before they worry about playoff inclusion or an outright Big 12 title.

If that’s not a fitting scenario within the context of this messy season, what other example would work better?