If we ever decide that we want the aliens to know a bit about us, we might make one of those time capsules the way kids do at the beginning of middle school, to be opened only when they “graduate” eighth grade into high school and shoot it off into the cosmos.

At some point, the martians will get it and pop it open. When they get to the “college football” portion of humanity, it will begin with two names:

Since the dawn of college football, these are the lone names that have survived the ever changing landscape of the sport, from no helmets or forward passes to 5,428 uniform combinations and 60 forward passes per game.

They’ve maintained relevance on the national scene and have been both grossly profitable and successful through all of the eras, bowls, postseason formats, television rights deals, and scholarship changes.

The two are are like two successful men who grew up together in the same town, went their separate ways, and occasionally get back together for beers to talk about how their wives are prettier, their jobs are better, and their kids more athletic than their counterpart, then drive off into the night groveling about, wondering if none of that might be true and worried that it’s not.

History betwixt the two has been marked by getting together just so long as they could stand one another. Michigan taught the game to Notre Dame. Apparently, it did the job well, because in 1888 … some four years since Michigan had given up a single point … Notre Dame scored and Michigan’s players were treated with boos upon arriving back home.

Michigan got personal even more later on, when Fielding Yost protested the use of two Notre Dame players and refused to schedule the Irish. That was the beginning of what helped shape both teams’ current standing, one as an independent and one as a staple of the Big Ten. Michigan didn’t care for Notre Dame, and with its considerable weight upon the Midwest as the then-Western Conference was created, didn’t want Notre Dame as part of it. So the Irish weren’t.

Rebirth And The End

Though they’ve been the most successful programs in the history of the sport, the two that answer to no one historically but one another, they’ve played only 41 times. The rivalry between the two is as much a respect/hatred/off-field relationship issue that ends in both teams saying, “Screw it, we’re going on a break,” as it is football things.

So it’s easy to forget that in terms of simply an on-field rivalry, this really has been a fairly modern quarrel in terms of consistency. Michigan and Notre Dame played every year from 1985 to 1999 and then after a break, from 2002 to 2014, when the series will end with no rendezvous in sight for the near future.

Over this modern time, it’s been a particularly fun rivalry, ending in a one-possession margin 16 times since 1985, including eight times in the BCS era. Michigan has taken six of the last eight betwixt the two, including from 2009 to 2011, when every game was decided by four points.

But as with everything in life, as time changes everyone and everything, so too does this battle between the most elite of college football’s historic titans. The new College Football Playoff and subsequent decision by Notre Dame to play a set ACC schedule featuring 60 games over 12 years has forced the Irish to revamp how they do things out of the conference.

All the sniveling from both fan bases aside, this is the real reason it’s ending. Both Michigan and Notre Dame recruit nationally, and with the Irish locked into a set amount of ACC games, it means the need is there to be flexible out of the conference and still be visible around the country. No longer can Notre Dame reasonably expect to compete for a national title putting Michigan, Michigan State, and Southern Cal on the schedule yearly, plus two or three more customarily strong opponents.

On top of that, the need exists for the Irish to be visible in other parts of the country, such as Ohio, where a deal with the Ohio State Buckeyes had just been struck to play a home and home in the 2020s. Notre Dame fans are everywhere … but if they’re locked into the East Coast for a fixed amount of games, you’ve got to get out around the country when you can.

Conference-style scheduling handicaps how you schedule. Michigan has long had Notre Dame on the schedule and was punished when it has tried to add other power teams to that slate, forcing a very difficult out of conference schedule that can knock a team from the race for the championship before it has barely started.

Likely, as the landscape continues to change and Notre Dame either ends the deal with the ACC wanting more or as it becomes less feasible to compete for a title as an independent, the two will get back together. There is significantly less animosity between the programs than there has been in the past for their hiatuses. 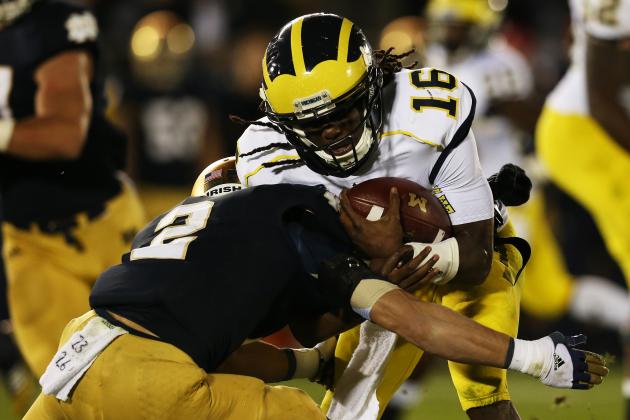 Though Michigan and Notre Dame have suffered through the problems that seemingly all watershed programs in college football have over the last 20 years, their relevance to the game cannot be overstated. For this final tilt between the two for the time being, the average ticket price is going for over $419, up 12 percent from last year.

How closely intertwined are these programs? The winner will leave the series with the highest winning percentage in the history of college football. The numbers are that close. Michigan will stay No. 1 in wins and Notre Dame No. 3. Michigan could likely stop playing football for four years and still maintain that grip on No. 1.

Both teams come into the game revived in a way after sluggish 2013 campaigns. For the Irish, an in-house hiatus of their own … losing Everett Golson for a year … hurt the bounce back from a caning in the BCS championship game by Alabama, and for Michigan, the fall was fast and mighty after clipping Notre Dame in Ann Arbor under the lights.

Both looked comfortable in their own skin and ready for a major collision, but both played significantly inferior opponents, so you never can tell fully. The narrative that the game is over-played and that both annually dip right after it ends is normally footed by fans of programs that aren’t as relevant as Michigan and Notre Dame … and never will be.

When the dust clears on Saturday night, turning rapidly into Sunday morning in South Bend; when the deed has been done one way or the other, we won’t realize it immediately, but we’ll miss this annual tilt.

Last call is Saturday, probably around 11:30, and if recent history is any indication, it’ll be close. These schools will get together again, likely for a short stint, or when college football’s postseason format changes yet again and thus changes the way teams seek to schedule.

One will leave as it has in recent years … feeling great about its prospects going forward at making a run at the whole damn thing … one defeated and wondering “what if” a few different plays had gone the other way.

And they’ll ride off in different limos after Saturday night. But they’re sure to cross paths again down the road, off to chase more of the type of success only the other can ever understand, always watching from afar at their rival’s success, always comparing, always competing, forever interwoven in the historic fabric of the sport they play and the status they alone have always kept in a penthouse for which only they have the key.

While not a lot can always be gleaned from blowing out an inferior opponent, and while Michigan “should” have looked comfortable last week, the noticeable change in Doug Nussmeier’s offense seems to have taken hold for the better. Devin Funchess looks like he’s down to a weight that can allow him to make more plays, and it looks like Nuss walked in and said, “Why isn’t this guy getting the ball more?”, and so it has happened. Notre Dame’s small corners will struggle to deal with him in particular. In the first meeting when Everett Golson was the quarterback, Michigan contained him well and the Irish had more proven offensive weapons then, plus their defense was better. The series closes out with another down-to-the-last-minutes game, a win for Michigan.