The Missouri Tigers would have been the talk of the SEC and possibly the nation last season if not for the miraculous turnaround of the Auburn Tigers. Missouri went from fifth place in the SEC East in its debut season, and just two conference wins, to winning the East and going 12-2. Was 2013 the perfect storm for success for Missouri? Can the Tigers sustain their success in 2014?

First, let’s take a look at Gary Pinkel’s history at Missouri. The first six years of the Pinkel tenure tell a story of a struggle with the Tigers never getting above the .500 mark in conference play but slowly improving towards the end of the six-year run. In Pinkel’s first six years, the Tigers went 37-35 overall and 20-28 in the Big 12.

Missouri had clearly improved from the first six years of Pinkel’s tenure to the next five years, but the SEC debut was an eye opener, as the Tigers seemed to fall off the map. Among other things, injuries handicapped the 2012 team from reaching its goals and the Tigers seemed out-manned on the line of scrimmage, both offensively and defensively. In 2013, however, injury luck in the SEC East shifted and undid a pair of divisional foes, Florida and Georgia. The chain of events opened the door for Missouri. Can Missouri maintain its 2013 excellence in the new season? 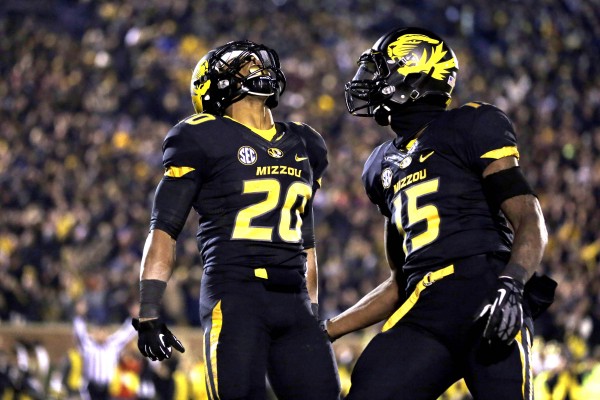 Missouri had a lot to shout about last season, but with Dorial Green-Beckham (pictured, right) no longer in the picture — so to speak, of course — the Tigers face an uphill climb in 2014.

The first thing to look at is where Missouri really struggled in 2012, the line of scrimmage. Missouri looked like a different team in the trenches from 2012 to 2013 on both sides of the football. This year the Tigers will return three regular starters as well as two others with starting experience on the offensive line. On the defensive line, the Tigers went from just 21 sacks in 2012 to 41 in 2013. The Tigers must now replace Michael Sam (11.5 sacks, 2 forced fumbles) and Kony Ealy (8 sacks, 3 forced fumbles). On offense, the drop-off seems to be minimal, but on defense it could be gigantic depending on how Markus Golden and Shane Ray fill the voids at their respective positions. Who is behind them on the depth chart? That’s another important question to consider.

Missouri also must replace its starting quarterback. Maty Mauk did get some valuable playing time in 2013, which will benefit him greatly this season, but his 51.1-percent completion rate has to be a big concern, especially with all the playmakers that must be replaced this season. The Tigers lose Henry Josey (17 TDs) but return Russell Hansbrough and Marcus Murphy (a combined 14 TDs last season). They lose L’Damian Washington, Dorial Green-Beckham and Marcus Lucas (167 receptions and 25 TDs combined) but return Bud Sasser and Jimmy Hunt (48 receptions and 2 TDs). The Tigers clearly lose some elite performers, but they do have players that will be able to step up and replace some of the production that has been lost. Last year, Missouri was second in the SEC in plays of over 40 yards (23) and third in plays of over 30 yards (36). In losing the number of playmakers the Tigers did, the questions become:

1) Where will the big plays come from?

2) If they don’t come, will Mauk be consistent enough to offset that deficiency?

A positive for the Tigers is the schedule. The first four games are South Dakota State, Toledo, UCF, and Indiana. Those teams aren’t complete pushovers, but the Tigers should be able to handle their business, and they also should be able to bring some of their younger players along and hopefully find some playmakers in the process. The next three games (at South Carolina, versus Georgia — after a bye — and at Florida) will decide the season. They also have a very favorable cross-divisional match-up of Texas A&M (which will score points but should still be a disaster on defense) and Arkansas (which should be a total mess as the Hogs continue to be shaped into the Bert-ball mold).

Missouri has a lot of question marks coming into the season, but the Tigers also have some positives they can count on. Going back to our history lesson at the beginning of this article, Pinkel and Missouri have won double digit games in four of the last seven seasons, and in two of the other three seasons they won eight games. Every year it takes a break or two for teams to rise to the top — it is the nature of college football itself — and if Missouri gets those breaks it wouldn’t be shocking to see the Tigers back on top of the SEC East. With all of the top-line talent lost and some of their competitors returning more to form, I don’t think this team has as high of a ceiling as the 2013 team, but with the schedule I can see them winning 10 games if they get the breaks.

One statistic that I like to look at is turnover margin. Last season Missouri gained 32 turnovers, which was No. 8 in the nation and tops in the SEC. On the flip side, the Tigers turned the ball over only 16 times, which was 13th in the nation and second in the SEC. Missouri went from having an even turnover margin in 2012 (+0.08) to being off the charts in 2013 (+1.14). That will be the statistic to watch this season, especially with Missouri’s loss of so many playmakers.

I don’t expect Missouri to win the SEC East this season, but the Tigers have set themselves up to be in the conversation.