Two seasons ago, I began to take notes on plus-territory drive starts for teams from the power five conferences, the American Athletic Conference, the Mountain West, and the four major independents (Notre Dame, BYU, Army, and Navy). Freelance researcher Ryan Orlinski helped me quite extensively with this project during the past two seasons and in the offseasons as well.

The Student Section isn’t even a month old as a blogsite, but it is the new home for what was once called “Enemy Territory” at another website. A new name will be given for this feature when the season starts and week-one data is presented to you in the middle of the week.

We have two seasons of drive-start-related data to show you, including FBS-versus-FCS games. The point totals mentioned here assume seven points, not six or eight, for touchdowns.

From the past two seasons, here are 10 particularly revealing facts about plus-territory drive starts, putting various teams in the spotlight for better or worse:

What does this tell you? Fresno State’s offense was so effective — and more specifically, so good at producing long touchdown drives — that short fields didn’t matter as much to Derek Carr and the rest of the Bulldogs.

9 – INDEPENDENTS DIDN’T DEPEND ON FIELD POSITION

Over each of the past two seasons, the four major independents — Notre Dame, BYU, Army, and Navy — have failed to create more than 20 plus-territory drive starts and score more than 65 points from short fields. Notice the “and” in that sentence. It’s a combination, not an either-or fact.

BYU is the only indie, in fact, to score more than 46 points from short fields in each of the past two seasons (62 in 2012, 65 last season). Notre Dame scored 46 points in 2012, and it took the Fighting Irish 20 drive starts to do so. (It didn’t matter, of course; the Irish’s defense was so tough that the offense rarely had to perform at a high level on the road to the 2013 BCS National Championship Game against Alabama.)

Neither Army nor Navy has scored more than 30 points on short fields in each of the past two seasons.

In 2012, Connecticut collected only 16 plus-territory drive starts and scored only 40 points off them, a very poor set of statistics. Most good-to-great teams will score at least 65 points if not 80 or thereabouts.

In 2013, the Huskies produced half of what they did in 2012. That’s right — UConn started eight drives at the 50 or in enemy territory. The boys from East Hartford scored only 20 points on those possessions.

This team’s offense needs help. It has to benefit from many more short fields in 2014.

In each of the past two seasons, Rutgers has begun at least 23 drives on the sunshine side of the 50-yard line. For Cincinnati, that number is 20. The Bearcats have scored at least 96 points on those possessions in 2012 and 2013. Last year, Rutgers scored 100 points on its 23 drive starts. Yet, those 100 points didn’t lead to a winning season for the Scarlet Knights. Cincinnati finished its regular season at 9-3 before getting drilled by North Carolina in the Belk Bowl.

Speaking of the white-haired wonder… 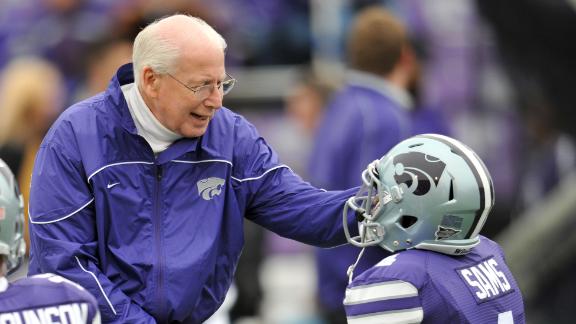 Bill Snyder benefited more from plus-territory drive starts in 2012 than any other power-conference coach. When Kansas State’s numbers became merely “above-average” and not spectacular in 2013, his team lost enough points and leverage to go from “Big 12 champions” to the middle of the pack.

This past season, Kansas State was solid in the realm of enemy territory, with 21 drive starts and 87 points gained. That’s not bad. A 100-point total is not particularly common. The upper-80s is better than most.

Yet, the Wildcats didn’t come particularly close to winning the Big 12 after capturing the conference in the previous season.

Why? The 2012 team was phenomenal in this pair of categories. KSU led all surveyed teams in both drive starts (40) and points scored (172). KSU scored a truckload of points on short fields in 2012 and lost just about half of its total last season… even though 2013’s numbers were quite acceptable.

If you’re going to pay attention to a handful of teams this upcoming season with respect to short fields, Kansas State should be on your short list.

After so many seasons of steady performances and bowl bids,- Air Force has plummeted. The Falcons went 2-10 last season, winning only one game against an FBS opponent (Army). In 2012, Air Force went 6-6 during the regular season, which was a lot better than 2013, but not nearly the eight-win season the Falcons frequently achieved under head coach Troy Calhoun.

How do short fields figure into Air Force’s situation? In 2012, the Falcons bucked the odds to a degree. Their 6-6 record was attained in spite of only nine plus-territory drive starts and 28 points from them. The nine drive starts represented the lowest total of all teams surveyed in 2012.

Last season, Air Force didn’t improve. The Falcons gained only eight plus-territory drive starts, the fourth-worst total of all teams surveyed (three teams had seven). Calhoun’s crew posted only 31 points from those drives. Air Force wasn’t strong enough to win in the absence of big plays from its defense and its special-teams units. In 2014, the equation has to change in Colorado Springs.

4 – INDIANA’S DEFENSE WAS THAT BAD

In 2012, Indiana scored 61 points on short fields. Last season, the Hoosiers scored 111, a 50-point increase. That should translate into noticeably better results.

Indiana could score in 2013. It simply couldn’t prevent other teams from scoring when it mattered most.

In 2012, the Ducks scored 157 short-field points, third-best of all teams surveyed. Last season, they scored only 87. This was partly a product of a less efficient short-field offense, but the Ducks also lost nine possessions (26 in 2013 compared to 35 in 2012).

Oregon had to drive the ball longer distances last season. The Ducks handled the challenge most of the time… but not as well as they hoped they would.

2 – ALABAMA FELL, AUBURN ROSE, AND THEY MET IN THE MIDDLE… BUT AUBURN ACHIEVED MORE

This isn’t the most significant collection of stats on the list, but it’s definitely the most fascinating one.

In 2012, Alabama was fourth among all teams surveyed with 142 short-field points. Auburn was the fifth-worst team among all surveyed, with only 33 points. In 2013, the two teams met in the middle, both scoring 80 points from short fields. Auburn, however, scored those 80 points on only 13 possessions, whereas Alabama needed 20 to score its 80 points. The Tigers’ offense was more opportunistic last season. The piece of real estate known as “enemy territory” helped flesh out that reality.

Jimbo Fisher’s team has been the king of short-field production in major college football over the past two seasons. Several other teams have had one great season. Florida State has enjoyed two.

Florida State is the field-position king of college football over the past two seasons. Period.

The Seminoles finished second among all teams surveyed in 2012 with 165 short-field points. Last season, while a lot of other teams (several of them mentioned in this piece) fell off the pace, Florida State remained consistent, ringing up 159 short-field points. That’s numero uno… precisely where the Seminoles finished in the rankings on the night of the 2014 BCS National Championship Game.

Jimbo Fisher has quite genuinely made short work of opponents — the numbers tell the story.

You’ll find a lot more facts on drive starts as the Statistical Summer continues in the first few weeks of August.