With the odd-shaped object known as a football, weird bounces constantly invite the twin possibilities of great fortune and total disaster. “Fumble luck” is best captured with the naked eye; some fumbles are easily recovered, while others are true “50-50 balls.” Nevertheless, if the eye can’t cover every college football game in full (and it can’t), the next best thing is to chart “fumble luck” and put it into perspective. That’s what we’re going to do here today on the final weekend without FBS college football in 2014.

In our first piece on fumble luck, we’ll revisit notably successful seasons from 2005 through 2012, and then broaden that focus to include 10 notable seasons — some successful, others not — from 2013. If you notice that several national champions and other highly successful programs are missing from this list, don’t worry — you’re right. We’ll look at 10 powerhouse programs in a follow-up companion piece on fumble luck.

Comments: USC and Notre Dame enjoyed more fumble luck than West Virginia. However, West Virginia’s combination of a particularly explosive offense after its midseason turnaround (fueled by Pat White’s emergence) and a comparatively weaker schedule gave the Mountaineers a little bit more margin for error. Even while losing a majority of its fumbles, West Virginia had the offense to compensate for such a trend. Moreover, 10 lost fumbles in a season, while not tremendous, is not particularly harmful, either.

Comments: Florida enjoyed a great deal of fumble luck, getting back 60 percent of its cough-ups. Louisville, which made and won the Orange Bowl in the 2006 season, was able to withstand incredibly bad fumble luck and a much higher number of lost fumbles than 2005 West Virginia in the Big East. The Cardinals also had an offense that could absorb and overcome a lot of mistakes, but this puts West Virginia’s 10 lost fumbles from 2005 in a different light. The fact that Wake Forest won the ACC with ordinary fumble-luck numbers shows how lousy the league was in 2006.

Comments: Hawaii, West Virginia, and Illinois all reached BCS bowls in this season, and all three teams were less than impressive in terms of protecting the ball. Hawaii and Illinois needed to recover a majority of fumbles to be as successful as they were. West Virginia was once again able to overcome fumbles and not-so-great fumble luck… until that season finale against Pittsburgh, when the Mountaineers lost three fumbles and failed to lock down a spot in the BCS National Championship Game against Ohio State.

It’s amazing that LSU, having lost only three fumbles all season, lost two games in “The Season When Just About Everyone Lost At Least Two Games.” It’s not amazing that the best Kansas team in recent memory lost only seven fumbles and enjoyed relatively good fumble luck. LSU is certainly an example of a great fumble-luck season.

Comments: Utah enjoyed a fairly good fumble-luck journey, en route to a Sugar Bowl win over Alabama. How the heck did Cincinnati win the Big East? (The answer is something West Virginia fans are familiar with, explained above.) Penn State made the Rose Bowl while recovering a majority of its fumbles. 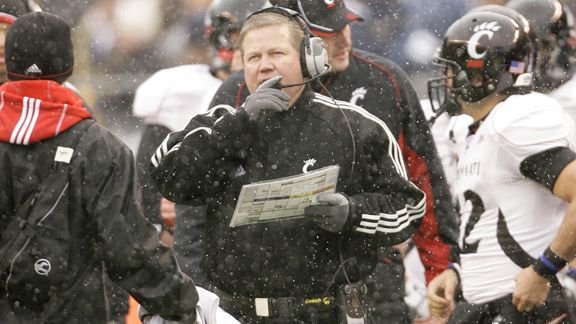 In 2009, Brian Kelly’s Cincinnati Bearcats very nearly reached the BCS National Championship Game (against Alabama in Pasadena, Calif.). Many reasons account for why Cincinnati attained such a prominent position at the end of the regular season, but one reason stood out: fumble luck. Cincinnati’s 2009 campaign was as good a fumble-luck season as any team could possibly hope to enjoy.

Comments: Cincinnati’s 2009 season joins LSU’s 2007 as one of the two best fumble-luck seasons in this whole survey. No wonder the Bearcats were THISCLOSE to a spot in the BCS title game. Boise State and TCU possessed strong defenses and ample offensive firepower, more than enough to offset ordinary (if not subpar) fumble-luck seasons and meet in the Fiesta Bowl. Georgia Tech was extremely “fumble lucky” on the way to the ACC title and the Orange Bowl. Iowa was unlucky, but its low overall number of lost fumbles enabled the team to meet (and beat) Georgia Tech in that very same Orange Bowl game.

Comments: LSU’s fumble luck in its best seasons was and is one of the more noteworthy takeaways (pun not intended) from the research performed on this topic. Oklahoma State’s fumble luck wasn’t great, but again, the overall number of fumbles was low… and the Cowboys could certainly score in bunches to offset the occasional mistake. Their defense also snagged a ton of turnovers in 2011. That helped more than a little.

Comments: Louisville was blessed with great fortune in 2012. Northern Illinois’s piece of immense fortune in 2012 was that it played in the Mid-American Conference during a year when a lot of other power-conference teams weren’t all that special. This perfect storm enabled the Huskies to slip into the back door of the Bowl Championship Series, making history for the MAC. 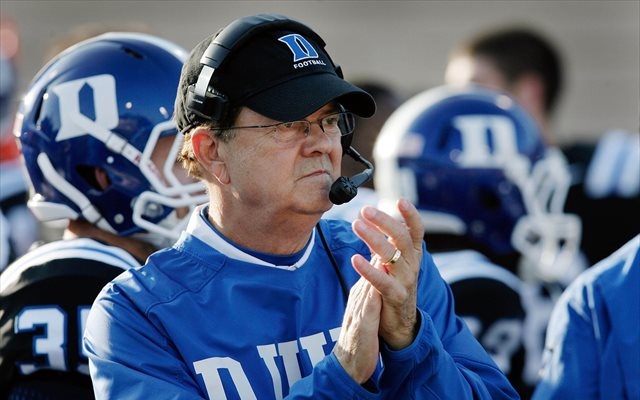 Getting back 62.5 percent of your fumbles and losing only six over the course of a season? That’s how you can win the ACC Coastal Division for the first time, David Cutcliffe.

Comments: Arizona State, Duke, Michigan State, and Missouri all turned low lost-fumble counts into great seasons. Baylor enjoyed noticeable fumble luck, getting back nearly two-thirds of its fumbles to keep the lost-fumble count manageable. Nebraska fell well short of its potential because of a lack of ball security. Its fumble-luck (distinct from the number of fumbles lost) actually could have been a lot worse.

UCF got a lot of breaks in its historic and hugely successful season, but the key insight is that the Knights were talented and resilient enough to make full use of good luck. Notre Dame, Utah, and Virginia Tech must have had really lousy (or maddeningly inconsistent) offenses to waste those kinds of microscopic lost-fumble totals.