You know how much the college football community treasures Steve Spurrier. No, not everyone loves him, because the SEC isn’t a place for mutual or widespread love. Just about everyone in college football does treasure him, though, because without him, the sport would be so much more…

Saban, the man with the stock quote and the boilerplate statements, is the personification of the defensive, hard-edged coach with a penchant for the cookie-cutter remark and the desire to not engage in playful jousting. No, there’s nothing wrong with that… it’s just a slice of gray in a world that can always use more color.

College football fans and bloggers love Spurrier because he’s one unending splash of eye-catching tones, the antithesis of ordinary. If most coaches are applesauce and plain oatmeal, Spurrier is jalapeno bacon with Eggs Benedict and black beans. It’s human to like a breakfast popping with flavor — even if it adds a lot of calories and fat — more than the good-for-you breakfast which fails to excite the senses.

This is why college football chroniclers are so committed to documenting every syllable that tumbles from Spurrier’s lips, to the point that two links — such as this one here and this one over here — can provide a total of 33 classic Spurrier quotes. There’s also a regular column in the college football blogosphere which tries to take on the mind of Spurrier (and does a pretty decent job of it).

The zingers, the verbal twists of the knife, the present-day burns, the history-rooted barbs at old foes — these parts of Steve Spurrier’s off-field arsenal, called to mind by his return to SEC Media Days on Tuesday in Hoover, Ala., make him one of the more enjoyable figures in college football. SEC Media Days are what they are because Spurrier and another genuine original, Les Miles, throw electric colors and pulsating hues across the canvas of coachspeak. (Bret Bielema’s bad-guy image figures to provide some of the nastiness that gives many SEC fans life, but that’s a newer development, and it’s more the product of Bielema behaving poorly than anything else.)

Yet, you’ve read a “greatest Spurrier quotes” piece many times before. What’s worth exploring to a greater extent in this space is Spurrier’s place as a sportsman in the American situation of the early 21st century. Forget the entertainment value and the aversion to being boring; there’s a substantive side of the Head Ball Coach (it’s not the Ol’ Ball Coach, and any self-proclaimed Spurrierologist knows this…) which demands a little more attention.

Fans of the television show Mad Men know how complicated Bert Cooper’s loyalty codes are. It’s up to every human person to decide where — and how — to define the combinations of virtues and vices that merit loyalty or scorn. It’s tricky for ourselves, and it can be even harder to see it in others. Life is in many ways a journey to determine what’s attractive and what’s repulsive, what’s worth pursuing and, on the other hand, avoiding. On the surface, it might very well seem that Spurrier is little more than a bomb-thrower, a pot-stirrer, someone who revels in the arts of receiving and then re-directing hatreds from all angles. He certainly has perpetuated his shared of feuds over the decades.

Moreover, Spurrier can be (and has been) a pathetically small man at times. His treatment of Ron Morris, a columnist who had the temerity to be critical of Spurrier’s decisions on the job, represents Defense Exhibit A of a coach using his stature to muscle out a member of the press. Being adversarial — not merely for kicks, but with purpose — is a feature of journalism, not a bug. Spurrier’s behavior toward Morris was and is nothing less than embarrassing.

Yet, that episode and a few of Spurrier’s other not-so-glorious moments reveal a flawed person who — partly because of those flaws, not in spite of them — is so much more than his verbal daggers might suggest.

Spurrier has not been a Johnny-come-lately on the matter of paying players and, more specifically, recognizing the context in which collegiate athletes compete.  If other coaches have found it easier to be tight-lipped about various off-field issues as they relate to the NCAA and the larger realm of the governance of collegiate athletics, Spurrier has consistently spoken out. Yes, by his own words, he’s an “Old Testament” kind of guy, but being an Old Testament person doesn’t mean that one’s sense of justice can’t be properly oriented or, more to the point, fully evolved. Spurrier has, in many ways, been ahead of his time and his sport on a number of fronts, such as pushing for the college football playoff that’s finally here, albeit with eight teams and not the actual field of four that will compete for the 2014 season’s crown.

The more one looks into the heart of Stephen Orr Spurrier, the more one sees a richly competitive spirit, but a spirit that isn’t going to destroy itself in the pursuit of victory and material spoils. Yes, this can be said (and defended) even in the midst of the childish clashes with reporters. This viewpoint can be maintained even as the mind’s eye recalls all those instances of thrown visors, slammed headsets, and deep-red faces burning with anger, either toward Terry Dean or Doug Johnson or an official who made an unfavorable call.

Football coaching, as we’ve seen in the careers of Mark D’Antonio, Andy Reid, Dick Vermeil, Urban Meyer, Gary Kubiak, and countless others in between, is one of America’s most unforgiving professions. The pay is great, but the all-consuming nature of the craft is unmistakable and nearly impossible to overlook.

Critics will say — and with some degree of legitimacy, it should be added — that Spurrier isn’t X-and-O-ing the way he used to. His system, such as it was, hasn’t outfoxed opponents so much as his recruiting enabled South Carolina to become a viable force in the SEC. Spurrier isn’t ahead of the curve the way he was for much of the 1990s. You can contest that statement on the margins and fight over the extent to which it is true. The claim that the statement owns no truth whatsoever is dubious, though, if only because Spurrier’s resourcefulness — while still evident — is not what it was during the middle of Florida’s ascendancy in 1995 and 1996. Spurrier has lost a little bit of his coaching fastball, but two follow-up questions must be asked on the heels of that correct statement:

How much has he lost?

At what cost to his health and demeanor as a person?

Let’s fix our eyes on something beyond the field itself. When looking past the specifics and the reach of Spurrier’s modern-day acumen, there’s something to be said for one of the Head Ball Coach’s enduring points of insistence: Working longer doesn’t automatically equate to working better. It is from this very reality that one begins to see Spurrier not only in a fuller light, but as more of a person and less of a caricature.

Spurrier walked away from many more millions of dollars with the Washington Redskins. He bailed out of the NFL’s grim culture before it caused any more damage to him. (Pete Carroll has finally, blessedly, pierced the flawed notion that you can’t win with a happy face and a relentlessly sunny disposition in the NFL. Hopefully, the culture of coaching will continue to improve as a result of what Carroll has done in terms of the environment he creates for coaches, players, and Seahawk employees.)

Spurrier would never tell you that he’s a new-age guy. Yet, his attitudes toward life point to holistic well-being and, if followed by many of his peers in the coaching profession, would foster a culture that’s much healthier than the one we have now. On the surface, it seems as though Spurrier is obsessed with the Dabo Swinneys of the world and with getting under the skin of Georgia and Tennessee fans. However, look at this picture below and tell me that Spurrier says what he says about Clemson to perpetuate hatred instead of merely having some old-fashioned fun in a spirit of wholesome competition: 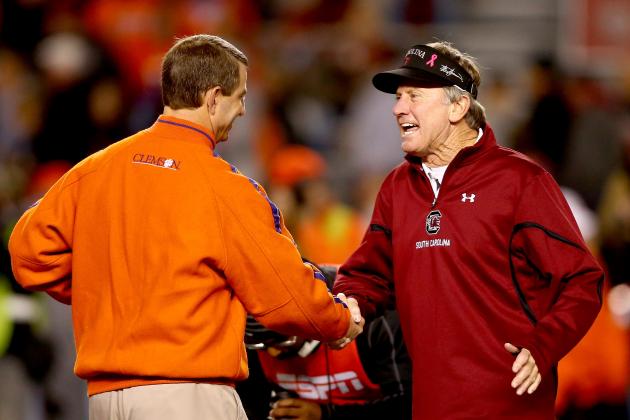 It’s so easy to think that Steve Spurrier loathes Dabo Swinney and has no respect for him or Clemson University. Does Spurrier hate losing and a poor read by one of his quarterbacks? He and his visor tell you all you need to know. Does he hate his opponents and the people who represent them? The zingers and laugh lines are almost always meant in a spirit of fun… and it’s that spirit of fun which has enabled Spurrier to last this long in the coaching business with a lot less of the strain that wears on so many of his contemporaries in college football.

Fans — more specifically, alumni — are understandably conditioned to read the worst into what rival coaches and players say. There’s nothing wrong with a Clemson, Georgia or Tennessee fan believing, with great persistence, that the difference between Steve Spurrier and God is that “God doesn’t think he’s Steve Spurrier.”

For the national college football observer, though, it is simply worth saying — with plain clarity and directness — that beneath the Old Testament exterior and the burning fire that turned him into one of college football’s most grudge-minded and revenge-fueled coaches, Steve Spurrier owns a well-adjusted new-age mentality that, if shared by others in his profession, would make the cutthroat world of college football a less exhausting and more affirming place.

We’ll see what Spurrier has to say when he takes the podium at SEC Media Days on Tuesday.

Come for the zingers. Stay for what those zingers might truly be trying to express.