The past few years, the Thanksgiving night slate of college football games (usually two, sometimes only one) has not electrified the country, blessedly allowing Americans to spend more time with their loved ones (if they weren’t watching NFL games, of course).

This year, however, one of the two Thanksgiving throwdowns owns some noticeable College Football Playoff implications. If you don’t want to see a season-ending controversy pitting 11-1 TCU against 11-1 Baylor, Texas might be your last, best hope. If you want to see the first College Football Playoff season encounter a chaotic and cluttered reality on Selection Sunday, Dec. 7, you should be pulling for the Horned Frogs. You should want a scenario in which the selection committee will be forced to make a tough choice and give all of us insight into how it operates, perhaps paving the way for systemic tweaks in future seasons.

The Student Section editors tackle the Horned Frogs and the Longhorns, a game that will have college football bloggers on duty this Thanksgiving.

What do you see as the key to TCU-Texas Thursday night?

I’d offer that it’s going to come in a key place, and that’s along the Texas defensive line. The Longhorns rank in the top 10 in the country in sacks this year, whereas TCU gives up just over one per game. Texas averages over three.

To the same token, TCU allows itself to be tackled behind the line of scrimmage a shade over 5 times per game, while Texas notches upwards of 6 of these tackles per game.

While it’s always easiest to look at TCU’s loss and “replicate” the style used to clip the Frogs, Texas lacks the weapons of Baylor to simply get in some sort of back room bar shootout. The Longhorns have far too few loaded clips in their satchel.

What Texas does have, however, is a pretty legit defense capable of keeping the team in a game for the most part, especially as the Horns have found the grease for their squeaky wheels as the season has worn on.

The Longhorns also rate in the top 15 in the country in team passing efficiency defense, which basically means that when you combine the tackles for loss, sacks, and this statistic, means they’re total hell on opposing quarterbacks, a position which typically has no shortage of talent in the Big 12.

I don’t always like using numbers because it’s a lot like reading about a car on the Internet and then telling everyone how nice of a ride it is, and they can be molded in any way you choose, but it’s pretty obvious that the key to this game lies in not letting TCU’s offense go off, an offense that you really cannot match if you’re Texas.

That means keeping at least reasonable shackles on Trevone Boykin enough to make it a one-possession game late and seeing what happens. If TCU lets the Texas defense do its normal thing, particularly on the defensive line, it’s upset special. If not, TCU just has too many arrows in the quiver. 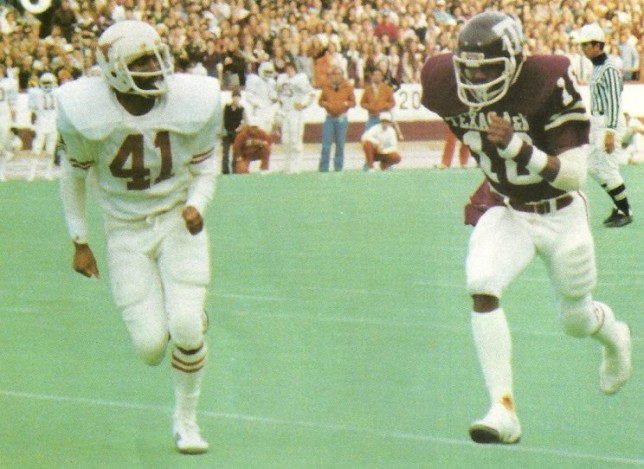 Vance Bedford (above, left) enjoyed a fine career as a member of the Texas Longhorns’ secondary during the Fred Akers era in Austin. Now, Bedford is the defensive coordinator at his alma mater, helping Charlie Strong find his footing at Forty Acres. How Bedford’s defensive line handles TCU’s offensive front will have a lot to do with the outcome of Thursday’s highly consequential Big 12 showdown.

The matchup to keep an eye on is the Texas passing game against the TCU back seven. Whichever unit wins this battle will ultimately win the game.

Let’s be honest: the Horned Frog pass defense has given up plenty of yards through the air this season. Currently, TCU ranks 101st nationally against the pass, allowing 255.7 yards per game. In conference play, the Frogs have fared much worse, surrendering 311 yards per game with five of their seven opponents throwing for over 300 yards.

However, it’s also worth noting that TCU ranks sixth nationally with 17 interceptions.

The stark contrast between the two last two paragraphs is what will make this game entertaining. Texas quarterback Tyrone Swoopes has had a solid freshman campaign, throwing for 2,152 yards (58.8 %) with a very respectable 12/6 TD-to-INT ratio. With three 300-yard efforts under his belt, there’s no reason to think that he can’t post another one against TCU.

But, can he go through the game without throwing an interception? That’s something no one – not even the explosive Baylor offense – has been able to do this season.

It’ll be fun to watch this matchup play out. 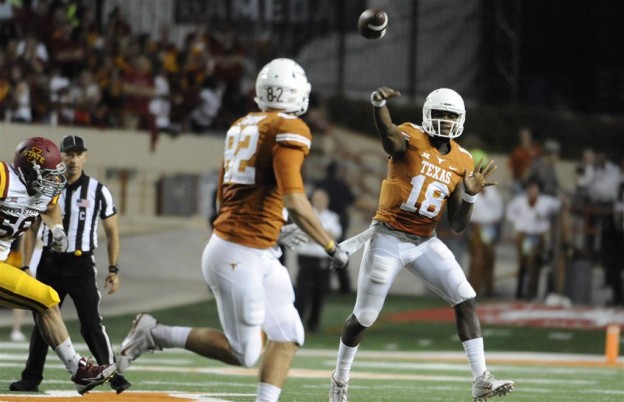 Tyrone Swoopes might be the “other” quarterback on Thursday night, standing in the shadows of TCU Heisman Trophy candidate Trevone Boykin. However, Swoopes just might be the central key to a Longhorn victory over the Horned Frogs. Texas’s offense has improved in recent weeks, and it must maintain a certain level of form in order to reshape the College Football Playoff calculus in ways that will make Baylor and Ohio State fans very, very happy.

It’s one of my favorite football game keys: When the featured matchup is Offense A versus Defense A, the “B” units often wind up deciding the issue.

It’s undeniably true that Trevone Boykin needs to handle the pressure of the moment, but if Texas’s offensive line enables the Longhorns to control the ball, the margins will shrink for Boykin, and Texas can pull off the upset.

(Psst: I think this will happen.)

Texas’s offense has not been Star Wars the past few weeks, but it has been noticeably productive, at least to the point that the Longhorns are no longer dealing with an outright liability on this side of the ball. When this team scores at least 28 points — as it has done regularly in November — it has a defense that is not merely capable of making that hold up; defensive coordinator Vance Bedford expects to win if his defense is given 28 points to work with.

You could say — quite reasonably and fairly — that Texas has slashed its way through struggling opponents to revive its season. Texas Tech, late-season-edition West Virginia, and Oklahoma State all fit the bill. Yet, it remains noticeable that the Longhorns not only beat all three teams, but did so comfortably. It feels as though Charlie Strong is getting the program turned around, and a win at home against TCU would affirm what seems to be in evidence in Austin.

This turnaround’s cornerstone has been defense, but it doesn’t happen without an improved offense contributing its fair share of the workload. TCU’s defense, which gave up a number of big plays to Kansas’s offense nearly two weeks ago, is the side of the ball that has to deliver the goods in this season-shaping game for the Horned Frogs.