It’s not much, but it’s something.

After eight months of pure talk, the nation’s FBS college football teams finally took the field in live games. We should know by now that “it’s only one game,” and that late-August football is a supremely volatile creature. The first three to four weeks of the season, occupying most of the non-conference game slots across the country before the conference rhythms of October settle in, give fans and pundits a rollercoaster ride. This is rocky, uneven, adrenaline-drenched, uncertainty-soaked football. It’s foolish to insist in many cases that what happens in week one defines a season.

Yet, week one sure beats eight months of speculation anyday.

It’s partly a fun exercise, and partly a legitimate challenge of the brain in tandem with the eye, to assess various teams after one — but only one — week. Which teams really are headed for the dumpster? Which ones really do seem to be on their way back to a better place? Which teams, for better or worse, should not be judged just yet and be accorded a wait-and-see attitude? Your verdicts might well be different, but this larger process of revisions, reaffirmations, and rebuttals represents a pretty good way to size up the first weekend of college football in every season.

THE EASY CALLS – FEW IN NUMBER, BUT CONSPICUOUS

Most teams are hard to assess in week one. There are always a few exceptions, usually for the wrong reasons. In week one of 2014, Wake Forest, Iowa State, and Vanderbilt emerged as obvious examples of teams that are going to struggle the whole season. Wake accumulated only 94 total yards and three offensive points (seven were scored on a blocked punt return) against Louisiana-Monroe on Thursday. Iowa State was blown out at home by North Dakota State. At least a decent Kansas State team pushed NDSU when losing to the Bison a year ago. (That’s partly a laugh line, but don’t forget the truths tucked into it.) Vanderbilt lost by 30 to a Temple team that was 2-of-17 on third-down conversions.

Those teams are going to have it rough, and few commentators would dispute that claim, just one week into the season.

You can also say that, one week into the season, South Carolina has a much rougher road to the SEC East title, while Texas A&M is a lot better than many thought. However, the extent to which these teams can (and will) change over the course of the season is still very much unknown. South Carolina isn’t likely to face an SEC East team that can expose its secondary the way A&M did, so there’s still hope that the Gamecocks’ defense can organize itself. Texas A&M’s defense is still wobbly enough that SEC West teams could expose it… to the tune of a 9-3 or 8-4 record. Those are still wait-and-see situations.

Now, let’s move on to “normal” scenarios… in other words, the ones that are not as easy to label after one week of a season.

CLEARLY IMPROVED (AND GOING TO STAY THAT WAY): WEST VIRGINIA

In the cover photo above, Clint Trickett of West Virginia launched one of his 45 passes on Saturday against Alabama in Atlanta’s Georgia Dome. Trickett completed 29 passes, but at least seven of them were dropped. Had his receivers done their jobs, the Mountaineers very realistically could have toppled the Crimson Tide. As things stand, though, the point is plain for the program: You’re not going to see the disaster that was 2013 — not this season. There won’t be a loss to Kansas, and there shouldn’t be profound struggles against other lower-tier programs in the league. Trickett is comfortable in coach Dana Holgorsen’s system. There’s also this point:

And a shoulder w/o shooting pain RT @mattmosley Clint Trickett is a different QB from last season. Has a lot more poise and confidence.

That kind of thing (health) has been known to matter. West Virginia figures to get healthy this season… at least enough to make a bowl game. The Mountaineers’ ceiling is what’s harder to tell at this point. 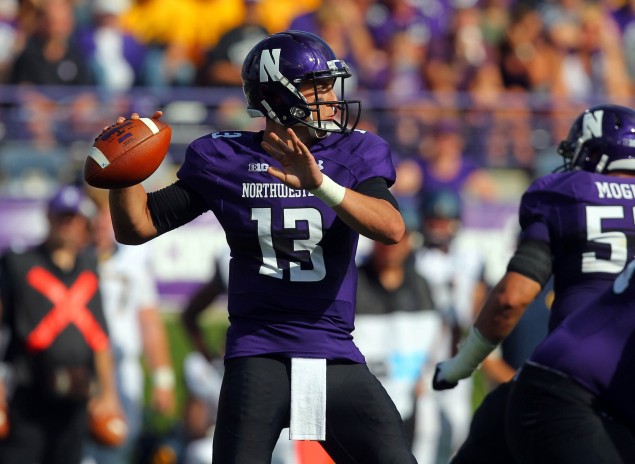 Trevor Siemian has plenty of experience as Northwestern’s quarterback, having filled in many times for Kain Colter in the recent past. The inability of Siemian to lead the Wildcats’ offense with distinction against a less-than-imposing California defense on Saturday afternoon is a troubling sign for Northwestern in 2014.

Losing at home to California — that’s not what most people expected from Pat Fitzgerald (one of the most overhyped coaches in the country, relative to his achievements) and Northwestern on Saturday. Sonny Dykes ran circles around Fitzgerald, and Cal took a great leap forward after an awful 2013 which, at the very least, offered the suggestion that Dykes might have been in over his head in Berkeley. However, Dykes expunged that notion with his performance on Saturday, and he deserves to bask in the afterglow of his achievement. Give Cal its due.

Yet, as much as Cal should indeed be praised for what it forged at Ryan Field on Saturday, Northwestern — given every chance to come back by a Cal offense that froze in the second half — could not find itself on offense. If the Wildcats’ defense hadn’t come up with an interception in Cal’s red zone, Northwestern might very well have scored only 17 points in week one, at home, against a defense that was absolutely torn to pieces in 2013. Saturday offered the Wildcats the perfect chance to show that the loss of Venric Mark did not represent the end of their ability to function smoothly on offense. Siemian was supposed to pick up the pieces.

Those pieces are still strewn over a gridiron of broken dreams.

Northwestern might get to a bowl game this season, but in one week, the ceiling for this group is no longer as high as it once was. It’s going to be a struggle just to get to any sort of postseason event for Fitzgerald and his forces.

OTHER CANDIDATES IN THIS CATEGORY (other than Wake/Iowa State/Vanderbilt): South Carolina, Bowling Green, Houston, New Mexico

WAIT AND SEE / DON’T BE LED ALONG BY THE SCOREBOARD: OLE MISS 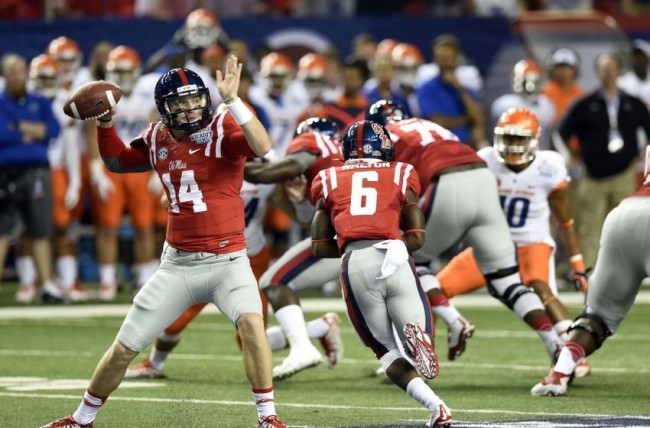 Bo Wallace, nicknamed Dr. Bo by many, has to find a cure for his ball-security ailment if Ole Miss is going to fulfill its potential. Quarterback physician, heal thyself… quickly. (Image courtesy of FanSided)

The Ole Miss Rebels walked away with a nice-looking 35-13 win over a Boise State team that played physically and well on defense, especially up front. Should the Rebels be pleased with the win? Yes.

They definitely shouldn’t be pleased with their performance.

The majority of case studies from week one in a college football season — excluding all the cupcakes eaten across the country — are the “wait and see” situations, many of them emerging from deceptive final scorelines and the weaknesses which coexist with strengths. Ole Miss has some mighty fine receivers and a defensive front that commands respect. The Rebels have certainly grown due to coach Hugh Freeze’s ability to develop the talent base and the depth chart. However, there’s this (not-so-)small problem named Bo Wallace. He’s a headcase until he shows he can be something (and someone) better and more mature:

Dr. Bo was seriously just making stuff up out there. https://t.co/VmZMHOF4hY

Freeze: "Two of the three interceptions were unbelievable to us because they weren't even in the progression."

Brett Favre, who happens to be from the state of Mississippi, was good at making s*** up.

Doctor Bo, you’re no Brett Favre. Clean it up if you know what’s good for yourself and your team.

OTHER CANDIDATES IN THIS CATEGORY: Well, a lot of them. Start with Clemson, whose quarterback situation started in a promising way against Georgia but then dissolved into uncertainty in the second half. Continue with Alabama, which was good enough to win in week one but has alarming deficiencies to address on defense, especially in the back seven. Finish with Washington, conspicuously impotent on offense against Hawaii late Saturday night, but glad to get No. 1 quarterback Cyler Miles into the rotation after being suspended for said game against Hawaii.