The story of Arizona State’s once-lopsided, then perilously close, then numerically deceptive 55-31 win over Notre Dame on Saturday begins with a photo of Sun Devil Stadium:

I guess a battle of top 10 teams wasn't a big enough draw for that corner. pic.twitter.com/g5hRJmEIvr

Two top-10 teams in November, playing for the right to stay in the College Football Playoff race — that setup alone should guarantee a packed house.

However, this was Notre Dame — NOTRE DAME! — which came to suburban Phoenix to play Arizona State. Notre Dame is Catholic and Midwestern, which makes the school a natural draw in the Phoenix area. Phoenix is essentially a suburb of Chicago given the many folks from the Windy City who have moved to the desert over the years to catch some sunshine, Spring Training, and a life very different from what they once knew. Moreover, Phoenix’s heavy Hispanic population infuses the metro area with a substantial added Catholic population. Notre Dame in Phoenix? This should have been one of the toughest college sports tickets in Sun Devil Stadium history.

Irish-Sun Devils wasn’t as big as those two events, but it certainly should have electrified Tempe this late into the season.

Yet, those thousands of empty seats remained.

Ever since the program’s most iconic and successful coach, Frank Kush, was forced out in 1979, Arizona State has been chasing its past. The Sun Devils claimed a big win once in a great while — over Oklahoma in the 1983 Fiesta Bowl; over Michigan in the 1987 Rose Bowl; over Nebraska in September of 1996, en route to another Rose Bowl season — but this program’s moments in the sun have been few and far between in the post-Kush era.

The Arizona Wildcats have often played spoiler for Arizona State over the past 30 years. The Sun Devils have frequently lost the November game that would get them over the hump in the Pac-12 race. They’ve usually lost the big national game against a non-conference opponent that would catapult them to a greater height. They have lost statement games on which they staked a whole season’s energy and effort, particularly a 2005 home game against one of Pete Carroll’s best USC teams. Arizona State stormed to a 21-3 halftime lead and seemed to have the Trojans on the run. However, USC rebounded in the second half for a 38-28 win. That kind of event is why several thousand empty seats were seen in Sun Devil Stadium on Saturday.

Arizona State, for a long time, has been in the West what Clemson and Michigan State had been before their recent breakthroughs under Dabo Swinney and Mark Dantonio. Arizona State has been an “almost” program, and fans get very tired of “almost,” of being led to think that this is the year, only to be crushed at the end. It might not be right — SEC fans must wonder how this game didn’t draw a capacity crowd — but that’s the wounded psyche of the Arizona State fan base.

The Sun Devils take the field playing themselves, an opponent, and history. When they played Notre Dame on Saturday, they were trying to win three games at once.

Therefore, when a 34-3 Arizona State lead turned into a 28-0 run for Notre Dame and a tenuous 34-31 edge with still more than 6:30 left on the fourth-quarter clock, the nation got to see why those thousands of empty seats existed. Yes, Arizona State was perilously close to writing another stomach-punch chapter in a history dominated by the words, “what might have been.” This wouldn’t have marked an original development in the annals of ASU football. It would have merely been the latest addition to a bitter narrative defined by searing pain. 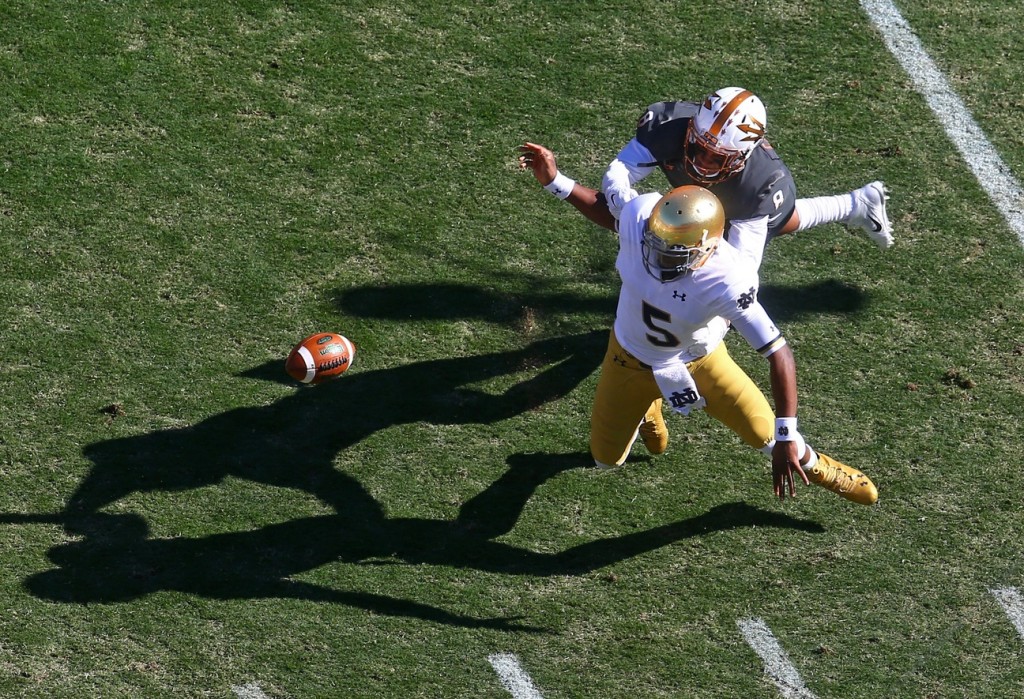 Everett Golson certainly helped Arizona State with his lack of ball security on Saturday afternoon. Yet, Arizona State’s offense had to do something on its own to win this contest. Late in the fourth quarter, Taylor Kelly and Demario Richard finally answered the call.

When quarterback Taylor Kelly led his offense onto the field at the 6:37 mark of the fourth quarter, with Arizona State ever closer to blowing a 31-point lead at home, everyone inside Sun Devil Stadium knew that a season hinged on the outcome of this next possession.

Either Kelly would rally his teammates and get his offense to score without need of assistance from a turnover-happy Notre Dame offense, or the Irish — truly Fighting with every ounce of desperation — would get their hands on the ball against a gassed Sun Devil defense that was teetering on the edge of collapse.

How Kelly met the moment would determine whether ASU claimed this signature victory and moved toward late November with everything to play for… or walked to its locker room knowing that another program-affirming conquest had slipped away. These are the intersections between triumph and disaster that programs have to begin to master — enough, at any rate, to shift the balance from “hit-and-miss” to “normally reliable.” When programs clear that hurdle, they breathe a different kind of oxygen and can begin to expect to be contenders on an annual, not just an occasional, basis.

With the ball on the Notre Dame 44 a few plays into the drive, Kelly hit Demario Richard for 40 yards, as Richard scooted down the left sideline past the Notre Dame defense. That one play transformed the energy inside the stadium and removed the weight that had rested on the shoulders of Arizona State’s increasingly nervous players. Shortly thereafter, Richard caught a four-yard touchdown pass from Kelly with 4:29 left. Arizona State built back a two-score lead at 41-31, and the threat of a monumental collapse rivaling Miami’s surrender of a 31-point lead against Maryland in 1984 quickly receded into an afternoon of sun and shadow.

Sun and shadow — Arizona State plays in both the light and the dark as a matter of course, and the same was ever true on Saturday against Notre Dame. In one momentous Taylor Kelly drive, the Sun Devils ultimately chose the light.

Now, their path to the College Football Playoff is still lit with hope.

That’s a rare experience for anyone who’s cared about Arizona State football for any appreciable length of time.