There are some parts of college football’s rules that make your brain hurt. They’re that stupid, that much of an assault on basic logic and what the naked eye can identify as a natural, normal event in the sport of football.

Two such rules-based embarrassments were in evidence this past weekend, and we’ll talk about them here.

WHEN A CATCH IS NOT A CATCH AND A FUMBLE IS NOT A FUMBLE:

FOOTBALL’S RULES HAVE TO BE MADE SIMPLER 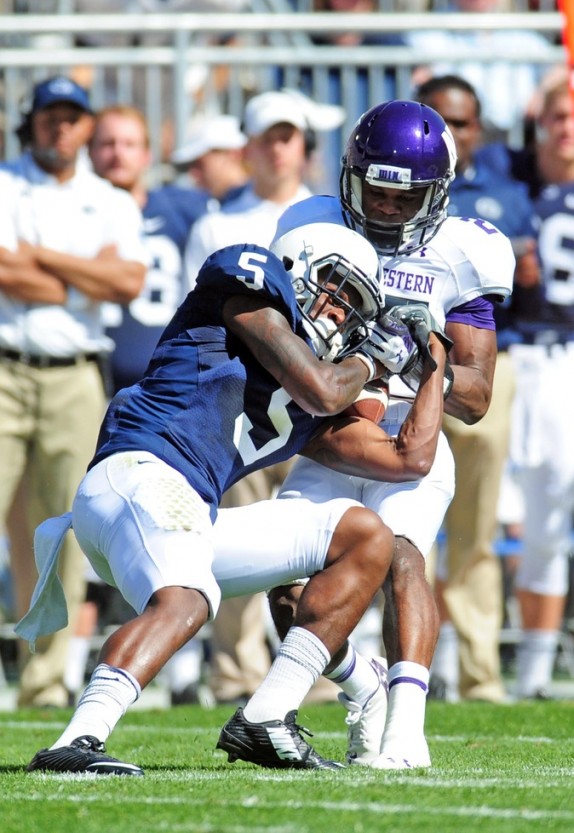 We’ll talk about the action in this photo, making it the centerpiece of this week’s review of really absurd events in the world of college football. The Penn State receiver being stripped by a Northwestern defender is DaeSean Hamilton.

See the photo above? Penn State receiver DaeSean Hamilton was stripped of the ball by a Northwestern defender in the second quarter of Saturday’s game between the two schools. Video has proved to be elusive, but know that the photo captures a moment which followed at least one full second (maybe a little more) in which Hamilton caught a forward pass and then got caught in a fight for the ball with the defender. What you see in the photo is the Northwestern defender in the process of raking the ball away. The Wildcats scooped and scored… but replay ruled the pass incomplete.

The Big Ten has not taken action in response to this play and its replay ruling… certainly not the way the Big 12 did when a pass play was not reviewed in the Kansas State-Iowa State game from week two.  How can this be the case when a relatively protracted struggle of roughly two full seconds between a receiver and defender still did not satisfy the requirements of a completed catch (and subsequent fumble)?

Once again, the college football rulebook is sufficiently vague… or, if you prefer to look at it from a different vantage point, insufficiently clear.

a. To catch a ball means that a player:

1. Secures control of a live ball in flight with his hands or arms before the ball touches the ground, and

2. Touches the ground in bounds with any part of his body, and then

3. Maintains control of the ball long enough to enable him to perform an act common to the game, i.e., long enough to pitch or hand the ball, advance it, avoid or ward off an opponent, etc., and

4. Satisfies paragraphs b, c, and d below.

b. If a player goes to the ground in the act of catching a pass (with or without contact by an opponent) he must maintain complete and continuous control of the ball throughout the process of contacting the ground, whether in the field of play or in the end zone. This is also required for a player attempting to make a catch at the sideline and going to the ground out of bounds. If he loses control of the ball which then touches the ground before he regains control, it is not a catch. If he regains control inbounds prior to the ball touching the ground it is a catch.

The key provision above — the precise provision which enabled the replay booth to rule an incomplete pass on a ball that was firmly grasped by a receiver for at least one full second with his feet on the ground, if not a half-second or close to a full second more, is 3-a-3, “an act common to the game.” Hamilton, the Penn State receiver, did not successfully “ward off” the Northwestern defender, so the rulebook offers an “out” for the receiver stripped of a ball over a full second after he catches it with his feet on the ground.

It’s stupid, but the rules create the escape hatch and offer a reason to view a completed pass and subsequent fumble as an incomplete pass.

Sadly, professional football isn’t different, and you were reintroduced to this reality if you watched the Thursday night game between the New York Giants and the Washington Redskins.

See the video here, and rewatch it a time or two to make sure:

You can see that the New York receiver, Reuben Randle, gets two feet down in the end zone with a firm grasp of the ball. Yet, the emergent “process of a catch,” “football move,” and “act common to the game” modifiers that have sprouted up over the past 14 years in football are so ascendant and overpowering right now that they demand a receiver in Randle’s position to have to do more than just catch a ball in the end zone with two feet down. That’s obviously why a ruling of an interception (following the stripping of the ball from Randle’s hands) was allowed to stand upon replay review. Yet, any rational person knows that a player has no other place to go in the end zone. There are no more yards to gain, no defenders to ward off. As soon as the ball is grasped with the feet on the ground, that’s it. The defense has been outfoxed. The act of a pitch-and-catch has fundamentally been completed. Any just and fair interpretation of such a sequence of events should grant the offense a touchdown.

Football’s rules, in college and the pros alike, don’t think so. They’ve insisted that the requirements for a catch become more complicated, as though that somehow sets a higher standard and makes the game nobler.

This article on pro football and this article from my desk during the summer both underscore the absurdly irrational quality of legal pass reception rules in the end zone, compared to legal run-based possession rules in the end zone. When a player runs the ball to the goal line, the instant the ball touches the plane of the goal line, it’s a touchdown. Pass catchers, though, don’t get that same natural, logical benefit of a touchdown upon instantly gaining possession.

Would it really be too much to ask for football’s rulemakers in both the college and pro games to say that possession is not about length of time, but merely about quality and firmness of possession? Whatever happened to a pass being legally caught when the player has a firm grasp of the ball with one foot (or in the pros, two) in bounds? Why is a simple standard such as that no longer acceptable? Shouldn’t it be okay? It used to work just fine in the past.

If I catch a ball in this instant, and then a defender whacks the ball away three-fourths of a second later, I still caught the pass. I didn’t drop it. There was an “A, then B” sequence of one person catching the ball and the other player knocking it away. Dropping a pass should mean, to a logical person, never securing or grasping it at any point in time. The rules need to be rewritten to reflect this. Maybe, after this past week in both college and the pros, something will happen.

COMMIT A PENALTY IN THE LAST MINUTE, STILL GET THE BENEFIT OF A CLOCK RUNDOWN

Look at the play-by-play log for the final 90 seconds of the Tennessee-Georgia game from Saturday. Tennessee actually called a timeout after Georgia’s second-and-seven run from the 30 inside the 1:15 mark of regulation. After the third-and-11 run mentioned in the log, Georgia did indeed commit a holding penalty. The foul occurred with one minute left. You will then notice that the fourth-down play (with the penalty being declined by Tennessee) occurred with 40 seconds left.

That’s right: Georgia got a 20-second runoff despite having committed a penalty as the offensive team in the final minute of a game.

That’s college football for you… sometimes.

It’s absurd, and it was part of the week that was in this always-maddening sport.