In the process of reviewing the past week of absurd occurrences in college football — and there were many –the point should settle into our minds: Bringing up these images and instances is not done just to make you angry, to merely recall various outrages so that you can yell, “YEAH! TELL ‘EM AGAIN!”

This is not meant to arouse a kind of “peasants with pitchforks” anger. If that’s what you think the intent of this is, well, simply know it’s not.

With that little preamble over, let’s dive right into a number of situations, some of which have been discussed in previous weeks and will (necessarily) continue to be explored in the future:

THE SIMPLE PRINCIPLE WHICH OUGHT TO GUIDE EXCESSIVE CELEBRATION PENALTIES

In the cover photo for this story, you can see Oregon’s Tony Washington bowing. That was the play which gave Arizona a new set of downs in the Wildcats’ 31-24 win over the Ducks last Thursday night.

What many of these officiating-and-rules questions boil down to is that officials should be able (and allowed by the rule structure, it should be said) to use discretion in flagging players. Some rules get underwritten, meaning that they lack clarity. For unsportsmanlike conduct rules and the subsection of excessive celebration rules, all that’s needed is a very simple principle, and officials should be able to tell the difference between the two:

Is a celebration made in a spirit of innocent and relatively wholesome fun, or is it meant as a sort of “f— you” or “you suck” statement, something meant to rile up the opposing team or show up an opposing player?

That’s the crux of the matter. Was Washington’s bow nasty to the point that it fit the latter description above? I’d like to think adults in the room would say no.

Consider this, from the 2011 Florida-LSU game, as an example similar to Washington’s:

All Brad Wing did was to extend his arms for one or two seconds, in a brief expression of, “WHEEEEE! This is fun! I’m a punter who is actually scoring a touchdown in front of my home fans! YES!” Not for one SECOND should that be seen as showing up an opponent. Common sense tells us this.

By all means, hit a team for taunting right in an opposing player’s face. By all means, throw a 15-yard flag for a throat-slash gesture. What Tony Washington did last Thursday and what Brad Wing did three years ago? Innocent fun from college kids. These are not difficult decisions. They’re not. Period.

If you look at this vine from our quick-hit posting hub, The Locker, you’ll see a play from last Saturday’s Texas A&M-Mississippi State game in which the offending A&M player was not only flagged for targeting, but ejected.

The simple distinction to make is this: Targeting might have existed on the play, but an ejection was hardly warranted. Why? The hit was late and involved some degree of helmet action, but it was also partly a shove aided by the forward movement of the shoulders. If a player is going to be ejected, which rates as a severe punishment, the hit needs to meet much higher standards of:

This hit was preventable, so it qualifies under “B,” but I’ve seen much worse. Where this play falls short of meriting an ejection is “A.” That’s just not nasty enough. A truly mean and intentionally vicious hit is one in which the player solely spears the opposing player with the helmet. The shoulders and arms are absent from the process of making the hit. “Helmet as sole weapon,” akin to a rocket being launched, is what should draw an ejection. Again, this kind of distinction should not be hard to make. A 15-yard flag was an entirely sufficient penalty for A&M here, nothing more.

REVIEWABILITY PROBLEMS: MORE PLAYS THAT SLIP THROUGH THE CRACKS

Click on the Twitpic link here from GIF-master C.J. Fogler, and see the flop by UCLA placekicker Ka’imi Fairbairn at the end of Saturday night’s late game against Utah:

It is woefully apparent that the Utah rusher missed Fairbairn, and that Fairbairn was fully able to complete the process of the kick, including the follow-through, without getting touched. On no planet was that a penalty on Utah.

Well, you might say — isn’t this reviewable? As they say in Spain, “No.”

From Rule 12 of the college football rulebook on the reviewability of various kicks:

ARTICLE 4. Reviewable plays involving kicks include:
a. Touching of a kick.
b. Player beyond the neutral zone when kicking the ball.
c. Kicking team player advancing a ball after a potential muffed kick/fumble
by the receiving team.
d. Scrimmage kick crossing the neutral zone.

You mean like this one in the Alabama-Ole Miss game, which gave the Crimson Tide an undeserved touchdown just before halftime?

As the kids like to say today — and it’s really all that needs to be said in response to the reality that several very important plays aren’t reviewable — “SMH.”

INTENTIONAL GROUNDING AND THE PRINCIPLES WHICH MATTER MOST

The intentional grounding rule — at any level of football — involves a basic tension between two very important needs. One need is for good defensive play to be rewarded. The quarterback should not enjoy the ability to easily thwart a good pass rush and diminish its effects by being able to dump the ball anywhere on the field, regardless of whether a receiver is in the vicinity or not. The quarterback needs to put some effort into the throw, and there should be a measure of purposefulness and/or intentionality to the throw. On the other hand, the safety of quarterbacks — players whose job it is (at least in part) to take hits when throwing the ball — should be sought as important in itself.

Last Thursday, Arizona quarterback Anu Solomon made a cross-field throw which hit just short of the line of scrimmage, but had a receiver in the vicinity. By rule, the throw’s failure to cross the line of scrimmage made it, at the very least, possible to throw a flag, which the officials did, but common sense (there’s that term again) should have made the officials reconsider.

Here’s the essential thought question which should dissuade officials from throwing flags on passes that fail to reach the line of scrimmage but have a receiver in the vicinity:

Is a pass any more or less an act of grounding if the line of scrimmage is the opponent’s 8-yard line and the pass hits the ground at the 9 instead of the 7? 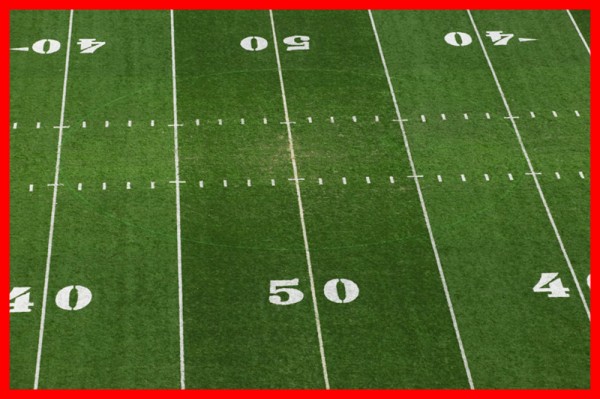 Just look at this field and imagine the line of scrimmage being the 40. If a pass hits the ground at the 41 or the 39, should it be any more or less intentional grounding based on THAT fact, or on the fact that a receiver was or wasn’t in the vicinity of the throw and its flight path? Basic common sense tells us that the presence or absence of a receiver should guide a grounding ruling more than where the ball lands… at least in situations when there’s uncertainty about the matter. An adjusted point of emphasis for future seasons would help here.

Either there’s a receiver a few yards away or there isn’t. The ball hitting the ground at the 9 or the 7 just doesn’t carry the same centrality in determining whether the quarterback exercised an overly easy escape from a pass rush by throwing the ball in that direction. It’s not the specific spot where the ball lands; it’s the context in which the throw is made and the larger surroundings of where the throw travels.

Over the course of the season, there will continue to be certain situations that arise again and again — some with different rulings, others with the same consequences for teams.

No team has been more victimized by one specific rule (properly applied, but a bad rule) than the Tennessee Volunteers. For background on this, look at last week’s collection of absurdities in college football.

Now look at this play-by-play log from Tennessee’s 10-9 loss to Florida. You’ll see a timeout called right after a Florida penalty in the final minute. Tennessee coach Butch Jones was seen screaming in anger just before he called the timeout. Why? He realized, again, that the clock was going to re-start, surely in reaction to the officials informing (perhaps reminding) him of the reality. In a sane world, Florida would have faced third down with 43 seconds left; the clock would have remained frozen; and Tennessee would have been able to call timeout after the Gators (presumably) ran the ball on third down. The Vols would have gotten the ball back after a punt with about 33 seconds left, give or take a few ticks of the clock. The odds of a Tennessee comeback wouldn’t have been great, but 30-35 seconds are certainly better than nothing, especially when a field goal was all the Vols needed.

The other recurring events from past weeks emerged in the Louisville-Syracuse and Arizona State-USC games.

In both games, a receiver initially put his hands around a pass in the end zone but did not hold onto the ball when falling down (Arizona State) or out of bounds (Syracuse). The Arizona State instance of this was more interesting, because ASU tight end Kody Kohl caught a pass a yard past the goal line, only to lose control when he hit the ground. Had Kohl caught this pass at the 1 and then fallen forward in the air, only to lose control of the ball when hitting the ground a yard past the goal line, the play would have been a touchdown, because he would have been a runner carrying the ball into the end zone, not a pass receiver. However, Kohl’s presence in the end zone throughout his attempted pass reception subjected him to a different (higher) standard for legal possession and a touchdown. It’s fascinating how that separation of runners and pass receivers continues to be seen and felt on possible touchdown plays.

In Cards-Orange, a play akin to the Northwestern strip of Penn State (also referenced in last week’s column, linked to above) occurred. However, this time, the replay booth ruled that a catch and fumble had occurred. (In the Miami-Georgia Tech game Saturday night, another similar play unfolded, but the crew ruled an incomplete pass. The inconsistency of these rulings is as maddening as the unwillingness to honor simple possession, with one foot down.)

In Sun Devils-Trojans, a pass play was not reviewed, calling to mind the Kansas State-Iowa State pass play which got a Big 12 replay reviewer and replay communicator suspended (and helped lead to this tirade from Iowa State’s athletic director, Jamie Pollard, this past Saturday after another replay ruling went against the luckless Cyclones).

Arizona State clearly seemed to have completed a catch late in the third quarter. Yes, it was and is amazing that ASU head coach Todd Graham had already burned through his second-half supply of timeouts, but in college football, the challenge system isn’t as restrictive as it is in the NFL. Plays should be reviewed whether or not a team has timeouts left, and in this case, the Sun Devils had achieved what by all appearances looked like a good catch.

In the USC game, ASU should not have to challenge.They were out of timeouts. It is up to the replay official to stop the game.

Week six was wild in terms of scoreboard outcomes, but it was just as wacky in terms of various (bad) rules, rule interpretations, points of emphasis, and reviewability inadequacies. We’ll see what week seven brings.