The college basketball season is fully underway, with showcase games arriving on the schedule (Michigan State-Duke and Kansas-Kentucky on Tuesday). We’ve previewed the season over the past week at The Student Section. Today and tomorrow, we give you a media roundtable for the sport, featuring special guest Matt Yoder of Bloguin partner site Awful Announcing. Be sure to visit AA tomorrow, where part two of this roundtable will be posted.

In part two, we’ll focus on personalities and individual broadcasters. Today, in part one, we look at the larger issues facing college basketball as a television product.

Question 1: There are so many ways in which college basketball can be improved on television. If given the chance to bend the ear of an executive or a producer (or both), what would you say?

For the love of all that is holy, get rid of some of the television timeouts. There’s no excuse for a college basketball game to have a mandatory stoppage every four minutes of game time. When you add in the coaches’ timeouts and fouls and replay reviews, the stop-and-go nature of the sport is maddening. At times, it makes the prospect of actually enjoying a college basketball game almost impossible. Surely these million- and billion-dollar sports networks aren’t in such financial peril that they can’t stand to sacrifice just one TV timeout each half to help our collective sanity.

I’m a terrible person to ask about this because I mainly focus on the action and tune a lot of the other stuff out. The on court graphics annoy me, but those pay the bills for all these tournaments and games on TV. As long as the score, fouls and time are visible and the crowd is audible, that is all I need.

I’m kinda with Scott. I usually get lost in the game and don’t really focus on what the announcers are saying. More Bill Raftery is about the only thing I can think of.

What I would say to network executives if I had the chance: The television timeouts can be kept, and actually, they can be lengthened by half a minute to facilitate one extra commercial.

(You might think I’m losing my mind, but bear with me… there’s a reason for this…)

However, in exchange for lengthening the media timeouts during games, let’s encourage college basketball’s conferences and member schools to agree that two fewer timeouts per team would be good. At least one fewer timeout would move things in the right direction and represent a good start.

Also, in exchange for added-length TV timeouts, I would tell networks to do a lot more of “keeping it here” in the final minute of a close game. That used to be part of college basketball broadcasts.

In industry parlance, “keeping it here” refers to the practice of staying with the broadcast in the arena instead of breaking to a commercial in the final minutes of a close basketball game. With fewer commercial pressures in the past, CBS — during close Final Four games in the 1980s — would stay in the arena with Brent Musburger and Billy Packer remaining silent. The CBS cameras would pan around the Kingdome or Kemper Arena to catch the sights and sounds in the building. It made for absolutely riveting television at the zenith of CBS Sports, the juggernaut in sports production during the 1980s and into the very early 1990s.

Also, I would tell network executives at ESPN and CBS (this applies to multiple sports, really) to bring back their 1980s-to-mid-1990s theme music, darnit!

Really — why did CBS not just keep its 1993 college basketball music forever, without any alterations? Why did ESPN not do the same? (NFL and NBA music are equally good examples — the theme music used to be so good. WHY would anyone want to change it if the perfect theme used to exist? It’s sad that networks think they have to change for the sake of change, and nothing else. If you have a winning musical theme, just stick with it.)

Question 2: How important is the game-window-length issue for you? Does it really matter whether a game window is two hours, 2:15, or 2:30?

There is a running joke among KU fans that on Big Monday you should be prepared to only see about three-fourths of a game because of how much the games seem to run over (though last year seemed to be better — thanks, ACC). I think it should definitely at least go to 2:15. This sort of ties in with wanting teams to have fewer timeouts so games can’t be so extended at the end.

I know pace of play issues are a big discussion in baseball and there’s growing whispers in college football about how long games are becoming as well. College basketball has its own pace of play issues with the proliferation of fouls and neverending TV timeouts. As far as game windows go, it befuddles me to no end why everyone involved doesn’t just use some common sense and allot 2:30 for games. That sense of deflation when you turn your game on at the top of the hour only to see the current game with 2 minutes left and a team fouling down 9 points for the sole reason of torturing you is such a uniquely disheartening feeling.

The game window matters somewhat to me. Games don’t actually tip off at the time they are listed, so there is always some leeway when a game runs a bit over. I would like to see maybe the windows moved from 2 hours to 2:15, but that’s kind of a small gripe. With ESPN’s collection of channels, it’s easy to catch the start of your game. For CBS Sports, it’s pure torture when their games run over, so CBS Sports should definitely expand their windows.

I have been a game-window zealot for the past five years, especially the past two or three. This is, to me, an unforced error on the part of broadcast outlets. When game after game after game is pre-empted, a sport is not being seen by a maximum number of viewers. Unlike the NBA, the college game — with eight fewer clock minutes and more volatility (owing to the youthfulness of players, a generally lower skill level, and other obvious factors) — requires first-half viewing. NBA games often lend themselves to “parachute viewing” six minutes into the second half. College basketball games are more susceptible to first-half runaways.

There’s another difference to point out between NBA and college basketball games: Except in the playoffs, NBA games usually aren’t rolled out one after the other on Saturdays and Sundays. Sure, Sundays after Super Bowl Sunday have a 1 Eastern game and a 3:30 game, but that’s essentially a two-game setup. College basketball, on the weekends, has an assembly-line feel.

With over 100 games on Saturdays and over 30 on many Sundays, college hoops doesn’t have the ability to be easily viewed through a service such as NBA League Pass, with a day’s action being condensed into a few concentrated evening hours. (The concept and dynamics are similar for weeknight baseball and hockey at the pro level.) College basketball demands rolling out one game after another for a whole day, at least on the weekends.

This being the case, do broadcast outlets REALLY need to pack game windows into two hours at the expense of pre-empting the first four to eight minutes of each subsequent game?

Is it REALLY going to kill ESPN or CBS to set aside at least 2:20 for a window, so that what would have been a six-hour block from noon to 6 Eastern becomes a seven-hour block from noon to 7 (noon to 2:20 is the first window; 2:20 to 4:40 is the second; 4:40 to 7 is the third)? Does that one saved hour — with two-hour game windows — matter more than irritating millions of viewers every regular-season Saturday over the course of a full season?

Question 3: While this question applies to the NBA as well, let’s ask it with respect to college basketball: Does the endgame parade of fouls and free throws concern you to the extent that endgame fouling should be much more severely punished in the rulebook? How close are we to a discussion about this topic, given the extent to which endgame fouls turn off fans and diminish the product on TV?

I’m not sure how close executives and networks are to a discussion of this issue… but they ought to be.

I’ll set up the issue by simply saying that this point of dissatisfaction is so deep, entrenched and pervasive that it should be seen as something people on the television side should want to fix. Something has to be done.

I will only add that basketball coaches should want reforms in this area as well. Coaching “the game” as it is normally played — as it normally flows — for 39 minutes should not give way to a loss in what is so clearly an entirely different kind of sport in the 40th minute. There’s no such thing as endgame hockey or endgame baseball. Those sports retain a basic form at the end of a game relative to the beginning. Football has an endgame component, yes, but teams are still trying to score, stop the other, or drain clock. Only in basketball does an endgame phase:

A) grind to a complete halt relative to the action which preceded it;

B) encourage not just the breaking of the rules, but rule-breaking with great regularity. 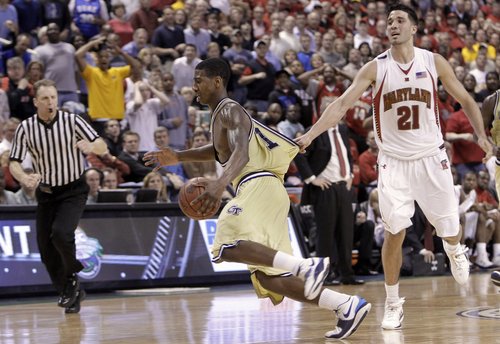 See this? THIS is not basketball. THIS, in short, is why endgame fouls need to be re-legislated such that they occupy a far less regular presence in the final 90 seconds of a game.

Everyone who loves and cares about college basketball should want endgame fouls to die a quick and fiery death. I’ll write about the specific reforms in another time and place. The main thing to pound home here is that we should all want this to happen sooner rather than later.

You read my mind from the previous question. It’s an issue – yes. But I’m not a fan of fundamentally changing the rules and how the game is played just on a whim. If anything, follow the NBA’s pattern and put a team in the single bonus for the second foul in the last 2 minutes and the double bonus for the third foul if they aren’t already in the penalty. Beyond that, I don’t want to see anything drastic that will fundamentally alter game-ending strategy. The most bothersome element here (for me at least) is overbearing coaches. Any coach who fouls down by more than 10 in the final minute, or calls a timeout down 3 possessions with 7 seconds left, earns a special place on my enemies list.

Fouling, no. Timeouts, yes. I said in an earlier roundtable that one of my pet peeves is too many timeouts. There’s a TV timeout every 4 minutes; teams don’t need 5 on top of that. Give them 3 and let’s see how that goes.

I really feel like something has to be done with the timeouts. The parade of free throws is strategy. Make enough and the other team will fall behind too much and will let the game end. I don’t think you can mess with game strategy like that when it’s result oriented.

Timeouts need to be reduced. There are already 4 timeouts ingrained in each half. I would be fine with 3 team timeouts, 1 in the first half and 2 for the second. I can’t imagine that it would do much for in game strategy to reduce timeouts when you have media breaks every four minutes. If your team was in trouble, fouling at the first possible time under the break would be something to do. I am in favor of FIBA rules for timeouts where you can only call them on dead ball situations.