The twists and turns of the next four weeks could wipe this scenario off the board, but when the weather gets colder and we approach Thanksgiving, college football editorialists have to discuss certain possibilities, even if they don’t actually unfold. The hypothetical which could soon become reality — and which has everyone in college football talking — is a TCU-Baylor tie, both in the Big 12 standings and at 11-1 in terms of overall record. The Student Section editors put forth their positions on an issue that is — in its immediate dimensions — undeniably clear. The long-term health of college football offers the intriguing subtext to this issue.

If TCU and Baylor both finish 11-1, which team should get the College Football Playoff berth, and why?

This is one of those where you grab a glass of scotch and water and ease into a chair uncomfortably to discuss. Has to be TCU, right? The Horned Frogs slaughtered apparently decent Minnesota out of conference, defeated West Virginia at their joint, and their only loss would be a heartbreaker when they had a two-foot putt to put the hole away and just decided to jack it.

While it “has to be” TCU, the answer is that it’s not. It’s Baylor for two very large reasons:

1. Head to head: the CFB Playoff committee doesn’t want to get into the dance of “Why play the games if they’re not going to matter?” Whether you think it’s of impressive ilk or not, TCU and Baylor played, and Baylor won. That has to count for something. And don’t give me the “no team that lets by 61 or 58 should play for a title.” It’s one damn game. It’s no less or more impressive than winning 9-6.

2. The Big 12 tiebreaker procedures state that in the event of a tie, the tiebreaker goes to the head-to-head winner. With the CFB Playoff committee supposedly required to take the conference champions into higher esteem, that would technically make Baylor the Big 12 champs and thus put that arrow in the Bears’ argumentative quiver.

You can debate all you want about whether or not those two things are enough to salt away a berth for Baylor over TCU, but these are the breaks. That said, Baylor still probably has a tougher schedule left, having to scurry with Kansas State at the end of the year. It should be interesting, but if they win out, “there’s a reason they play the games.”

If TCU and Baylor both finish 11-1, Baylor goes to the College Football Playoff.

Let’s be honest: the Bears would have a better resume if both teams were to finish the season 11-1. Sure, Baylor’s non-conference schedule was just one step above what the SEC schools in the state of Mississippi scrimmaged against this past weekend. However, playing in the Big 12 will balance that out in the long run, as the league is one of the deepest in the country. After all, West Virginia (currently fifth) and Oklahoma State (tied for sixth) gave Alabama and Florida State all that they could handle in the first week of the season.

Even if – and it’s a big if – Baylor loses the strength of schedule argument, it will still get into the field over the Horned Frogs. Remember, when comparing like teams, the Selection Committee will consider head-to-head matchups and conference championships won when making its final decision.

In other words, if Bears continue to win, they’re in. There’s no way that the committee is going to do something foolish like invalidate the regular season result (which is what putting TCU in the field over Baylor would do) in the College Football Playoff’s inaugural season. 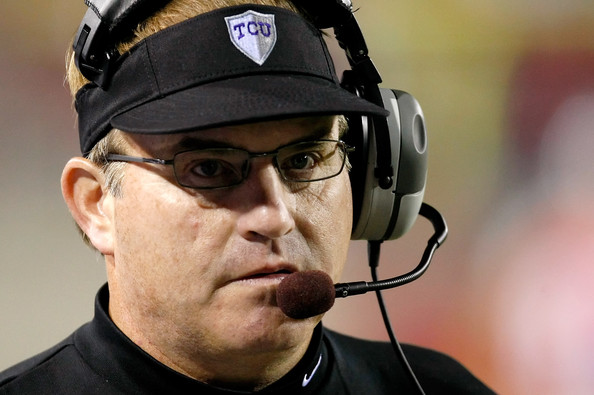 Gary Patterson just wants to get into the playoff, but as much as he will campaign for his team, Baylor won the head-to-head matchup. That part won’t go away, and it shouldn’t. Based on pure merit, Baylor wins this argument… and that’s why the committee — quite counterintuitively — has a tough decision to make.

This is going to be a headache, the kind of headache which shows exactly why we’re going to have an eight-team playoff in six years or so, with five power-conference champions and three at-large teams.

We do need to see this scenario play out, but oh, it’s going to be so nasty when one of these teams gets left at the altar. TCU coach Gary Patterson, who doesn’t much like Baylor, is already in full-spin mode, but this debate is much bigger than him or the two schools. You’ll see why.

Here’s the thing about the Baylor-TCU debate that will always be irreconcilable if it becomes clear the committee has to choose between these teams instead of inviting both of them into the playoff: The long-term health of the sport is served by putting both teams into the playoff… or neither of them.

Calm down — here’s the explanation:

First, you HAVE to reward a head-to-head win and the conference tiebreaker which accompanies it. See “Texas 45, Oklahoma 35, on a neutral field, 2008.” We’ve been through this dance in the Big 12 before. It wasn’t fair then, and it wouldn’t be fair now, if Baylor got excluded. You HAVE to honor a head-to-head result, PROVIDED (there’s always an extra stipulation in college football) that the resumes are CLOSE in the other 11 or 12 games. Oklahoma had a better resume than Texas in the other 12 games in 2008, but was the gap so decisive that Texas’s head-to-head win on a neutral field (not at home, but on a neutral field) didn’t serve as a sufficient counterweight?

Texas played a modest non-conference schedule in 2008, while Oklahoma scheduled a couple of big hitters, TCU and Cincinnati. OU cleaned up in the non-conference realm in 2008. However, Texas played Missouri in the regularly-scheduled portion of that Big 12 season, and OU did not. The Longhorns also played Texas Tech on the road, whereas Oklahoma got the Red Raiders at home. The composition of Texas’s Big 12 slate narrowed the gap in terms of resume.

I ask you again: While OU’s resume was certainly better than Texas’s resume if you removed the head-to-head in 2008, was it SO much better that Texas’s head-to-head win (on a NEUTRAL field) didn’t shift the balance?

Plenty of thoughtful, informed, statistically fluent college football analysts think that intellectual rigor should be devoted to the 12- or 13-game resume, such that head-to-head is merely one result out of 12 or 13 and should merely be seen as “just another result,” with no special weight. That is a fair argument… but it runs into college football’s constant limitation: There aren’t enough games played each season to make full evaluations, anyway. The small sample size of a statistical batch means that when you get a neon-light, sound-the-alarm, bell-ringing specimen known as a head-to-head matchup, my goodness, you HAVE to honor the result if the resumes are at least in the same zip code for the other 11 or 12 games.

If, in 2008, OU had played the tougher Big 12 schedule than Texas, then one could have much more realistically advanced the claim that the Sooners’ full resume existed in a different zip code. As it was, though, the resumes were similar enough that Texas deserved the nod. Baylor would deserve the same nod over TCU.

While you HAVE to honor the head-to-head result, college football finds itself in a predicament here, in year one of the playoff.

I have said throughout the offseason and the season that the number one priority for the committee in its selections this year is to ensure that strength of schedule becomes THE top priority for teams. The selection committee in basketball kept SMU out of the 2014 NCAA Tournament because of this, and the basketball committee has been very consistent on that one point, PUNISHING teams that just don’t step to the plate out of conference. I’ve banged the drum in saying that the football committee could send a powerful message to all teams by emphasizing strength of schedule in year one.

YES, Baylor fans, your team really should deserve to go if we are looking at this on pure merit. I’m not going to dispute that point if we are talking solely about merit. Moreover, it’s not as though Minnesota is a win on par with TCU or Cincinnati for Oklahoma in 2008. The Golden Gophers have to win at least two of their next three games against Ohio State, Nebraska, and Wisconsin, to even come close to that kind of stature on a resume for TCU. The Frogs didn’t schedule tough teams in their other two non-conference games, either (Samford, SMU), so it’s not as though there’s a vast world of difference between the way TCU and Baylor scheduled.

However… (there’s that nasty, unfair word again), TSS columnist Allen Kenney brought up the simple point last week: TCU at least made the effort to schedule a mid-level Power 5 opponent. Baylor went all-cupcake. If the sport of college football is going to become better in the long run, what happens in year one of the playoff is going to send a powerful message which could shape the way athletic directors schedule non-conference games for many years to come. There is, in other words, a “good of the sport” argument to be made, an argument which runs directly against the specific merits of two resumes within one season, and the head-to-head result which puts Baylor ahead of TCU by any reasonable measurement.

It can be argued that it is in the long-term interests of college football for the committee to say to Baylor, “While we recognize you as the One True Champion of the Big 12, you need to step aside for TCU this season so that not just you, but all Power 5 teams, make an effort to schedule better non-conference games in the future.”

You HAVE to honor head-to-head results in a conference race, barring a remarkably wide gap in resumes elsewhere.

You also HAVE to promote better non-conference scheduling in college football.

These are irreconcilably opposed needs. This is why there’s no fully satisfying answer to the TCU-Baylor question. Baylor deserves this on merit, without question.

The good of the sport over the next 20 years might require TCU to be selected.