Should Mike Stoops be the defensive coordinator at the University of Oklahoma next season, or does that question place too little emphasis on Baylor’s quality?

I suppose the eventual answer to this is directly tied to whether or not Bob Stoops is the head coach, and I’m not going down that fox hole without Bob himself texting me and telling me he’s not. Nope. Won’t buy it. And you never go against the family, right?

What’s been glaring about Oklahoma’s defense in their three losses is how terrible they’ve been at everything almost evenly across the board. In their three losses, Baylor was the only team to not break 150 yards rushing on them … and they got 148 … to go with 396 passing yards. Each team has gone for over 330 through the air as well.

Basically, it’s not good when they lose, and it’s universally not good. Whether that’s scheme, not being prepared, or fundamentals, it’s hard to really pin point just one thing.

I’d have to really sit down and think about it, but I swear I recall the same types of frustrations lobbed at Brent Venables before he scuttled off to Clemson. I’m not sure really what sort of point there is to be made there, just that Oklahoma has been recruiting top shelf talent on defense for a long time and has been coming up short in big spots on defense long before Mr. Stoops.

I’m not a “fire everyone” guy after a loss. I see this less as an Oklahoma problem and more a problem with sustaining greatness in college football for any program. I always go back to scholarship limits as the watershed moment where basically, things really started to level out.

You look at Michigan, Notre Dame, Florida, hell, if you want to go back pre-Saban … Alabama … really any program, and you’re seeing how hard it is to sustain success.

So no, I don’t think you let Stoops go, but I do think you have to wonder why they’ve just been so miserably bad against elite-ish (relatively speaking to this year) teams on defense. Baylor was just a disaster, and as with anything in life, it’s important not to place too much stock in one event, especially if it’s an aberration.

The sun will come up tomorrow, as will chances to right the ship. 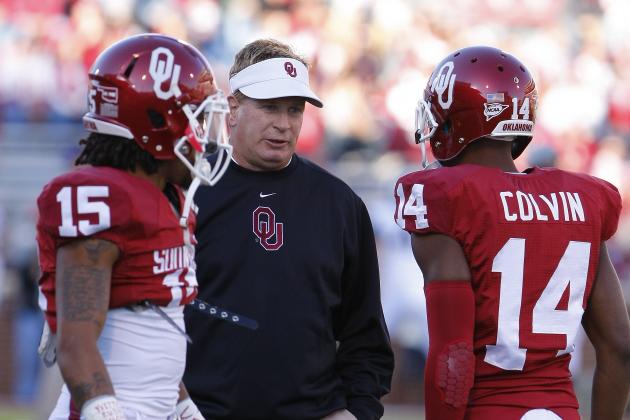 Is Mike Stoops the answer to Bob Stoops’s questions on the defensive side of the ball at the University of Oklahoma? If so, the discussion ends. If not, the follow-up question emerges: Should Bob go as well, or does this not have to be thought of as an all-or-nothing proposition for the Brothers Stoops?

This can acquire many forms, however.

Sometimes, you don’t protect the family — you open the family to the truth.

Sometimes, you don’t shield the family from criticism — you confront it and search the best way for the family to continue.

Sometimes, even the closest household relationships need to be improved not with more intimacy, but with more time spent apart in separate pursuits where two whole people can grow independent of each other.

This seems to be one of those times.

No, Bob Stoops should not be asked to step down at Oklahoma, though the program does seem to be back to 2012 — soft, getting roughed up at home in a big game (it was Notre Dame two years ago), lacking a nasty defensive line, which is what propelled the program to the heights in the first decade of this century.

Stoops made and won the Sugar Bowl one season after that 2012 smackdown suffered at the hands of the Fighting Irish. He has gotten off the mat before, and he can do so again. However, Mike Stoops’ time at defensive coordinator might need to be at an end. Failure is one thing; failing to change a line of attack is worse. Most specifically, failing to dictate matchups to Baylor and Art Briles is the least acceptable shortcoming on the defensive coordinator’s part.

The Stoops Brothers have had a great run. You can say that talent wins games, citing far better defensive linemen as the real reason OU won big from 2000 through 2008, with Mike Stoops having a part in that success from 2000 through 2003 before he became Arizona’s head coach in 2004. Yet, Mike Stoops helped Bob build something in Norman. He helped establish the foundation on which the Sooners’ new golden era — in a post-Barry Switzer world — proudly stood.

While it’s premature and — I think — misguided to ask Bob Stoops to seek a fresh start, what does seem clear is that Stoops has to go outside the family. He’s had familiar voices and faces next to him for so long (Brent Venables being the guy after Mike Stoops left) that there is indeed a stale quality to what OU is doing on defense.

Keep in mind here: Venables is thriving at Clemson right now, profiting from his own change of scenery. The nuance to be highlighted is that Bob Stoops, an iconic coach (yes, iconic — let’s not allow the last few years to diminish how highly he achieved for a solid decade at a prestige job), should continue to be the face of OU football.

What he needs is a shake-up on his defensive staff. For the good of the family, a brother needs to find a fresh start as a defensive coordinator.