Remember the end of the 2013 regular season, when one-loss Auburn was touting its resume over and against unbeaten Ohio State? That was a debate between a one-loss team and an unbeaten team. Ohio State lost to Michigan State, dousing the flames of controversy, but the debate did burst into color for the one week preceding the 2013 Big Ten Championship Game.

The Big Ten-SEC hypothetical discussed in this piece involves a one-loss team and a two-loss team. Does the SEC have an argument if a specific scenario emerges on Dec. 6? Read what the editors of The Student Section have to say on this next question:

If Ohio State or Nebraska finishes with one loss as the Big Ten champion, and the SEC West No. 2 has two losses, which team should get the nod and why?

There’s an important granular point to be made here… but that point does not offer enough reason to carry the argument for the SEC West in this case.

If a team goes unbeaten in a power conference, it should consistently get the benefit of the doubt over a one-loss team even if the one-loss team’s strength of schedule is appreciably stronger. There’s a very simple principle at work here: If you win all your games, you have done everything asked of you on the field. You have not given one reason for voters or committee members to downgrade you. You have been, in a strict win-loss sense, perfect. That deserves and demands a special level of respect, even if you played non-conference cupcakes and your league was down compared to the previous season. Given that college football involves such a small sample size in terms of games played, running the table in the regular season deserves special recognition. Reasonable people can and will disagree on this point, but it has a place at the table.

On the other hand, comparisons of one-loss and two-loss teams are different. It’s a lot easier to elevate a two-loss team with a stronger resume over a one-loss team with a weaker one. The one-loss team from a weak power conference, unlike the unbeaten team from a weak power conference, has done something to put its merits in question. There is a blemish on the one-loss team’s resume. Consider Oregon and Stanford from 2011. Oregon lost twice, Stanford once. However, Oregon beat Stanford head-to-head (on the road, decisively) and lost one of its games to LSU, which was the national runner-up that season. Oregon lost one more game, but that one loss did not withstand the rest of the two teams’ resumes.

This is why, on a purely conceptual level, SEC West fans have a foot in the door with respect to this argument. If the SEC West’s second-best team has a really strong 10-2 record, it could deserve consideration over and against a Big Ten champion with a 12-1 record. It could.

Right now, there’s not enough to do that.

LSU really needed to beat Alabama in order to be seen as a top-quality win for other SEC West schools. The Tigers, as things currently stand, are not in that class. Texas A&M beat Auburn, yes, but the Aggies were woefully bad the previous month. That really hurts the SEC West’s case.

What also hurts the SEC West’s case? The non-conference scheduling of the two Mississippi schools this season. If either Mississippi State or Ole Miss wants to tout its full 12-game resume and compare it to 12-1 Ohio State or 12-1 Nebraska, good luck pointing to a non-conference win of appreciable value. Boise State (Ole Miss) would be the best possible example. Nebraska can counter with a slightly better win over Miami. Ohio State’s win over Navy didn’t become as valuable as the Buckeyes hoped it would be, but it’s not that bad in relationship to what Ole Miss and (especially) MSU have to offer. Given the inconsistencies in the SEC West this season — not to mention the utter absence of quality in the SEC East, which has dragged down the SEC West through absolutely no fault of its own — it is hard to say that a 10-2 SEC West team has enough meat on the bone to be placed above a Big Ten team that would have both:

A) a conference championship with all it does (and should) represent;

B) one fewer loss.

A 12-1 Ohio State or Nebraska would also own a quality win against the loser in the Big Ten Championship Game, under this hypothetical. Ohio State, should it defeat Nebraska in Indianapolis (IF that scenario comes to pass), would also have a victory that my colleague, Bart Doan, put at the top of single-game achievements in college football this season.

This is a worthwhile debate to have… but the SEC West doesn’t have enough ammunition at this point. The division has been too inconsistent, and the Alabama-LSU slopfest from Saturday was the wrong advertisement for the division at the wrong time. Alabama and Mississippi State have to play a classic to change the conversation this upcoming Saturday… and even then, more work will need to be done.

Some will say “not all conference champions are created equal.” I totally agree. But those same people need to acknowledge the fact that just because a conference is allegedly lesser, it doesn’t mean their champion might not be the best team in the sport.

So you probably ask, “You’re one of those conference champion guys or close your mouth” types? Yes. Pretty much. If there is a point in leaving a window open for a non conference champ, it comes from, say, a situation where Mississippi State goes unbeaten and then loses to mediocre Missouri in the SEC title game. The Bulldogs would still probably be one of the best teams in college football, so if there is a way a non-conference champ has an argument to be in, that pretty much is it right there.

I don’t really care what you, the national media, or ESPN shills think of the SEC or the Big Ten. You win a conference, you deserve that chance to play against the other conference champs to prove you’re the best. That’s the only way we get closer to any form of “national champion,” which we don’t have now, and won’t have in January. 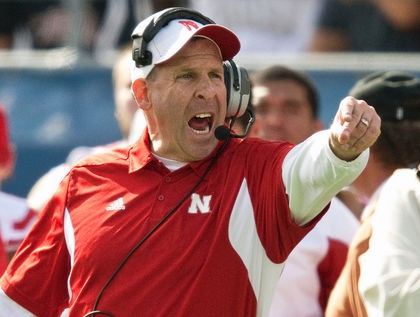 If Bo Pelini’s Nebraska team can run the table over the next month — beating Wisconsin, Minnesota, Iowa, and (possibly) 11-1 Ohio State in the Big Ten Championship Game — the SEC West’s second-best team would have to own a lot of high-quality scalps in order to eclipse Big Red. Only Auburn — with its road win at Kansas State and wins at Georgia and Alabama in the coming weeks — could remain at the discussion table with a 10-2 record. Even then, it would be a hard sell to make.

That depends on the exact meaning of the question.

If the question is “Will one-loss Ohio State or Nebraska make the College Football Playoff?”, the answer is “not without a little help.” Presently, the teams that lead the SEC, Pac-12, Big 12, and ACC have better resumes than the Buckeyes or Cornhuskers have at the moment. But, if one or more of those teams should stumble and finish with two losses, it’ll be tough to exclude the Big Ten champion, especially if Ohio State were to go undefeated in league play. By doing so, the Committee would be sending a message that all of the power conferences aren’t equal.

The same applies for a two-loss SEC non-champion. For reasons that I cannot possibly fathom, many in the media – especially those in Bristol or that aspire to work there one day – really want us to believe that the SEC is much better than the rest of college football. While they trot out figures such as “the SEC has won seven of the last eight national championships” to support their claim, they ignore the fact that the power 5 conferences don’t meet often enough in the regular season to the point where we know that team No. 2 from the SEC is really better than team No. 1 from another conference. As last season’s BCS bowls taught us, it’s difficult to know which team is better than another until they settle the issue on the gridiron.