While Polls Have Florida State As Pre-Season Favorite, The Ticket Market Says Something Else

The 2014-15 college football season is just a two weeks away. While many are anxious for the season to start, just as many are predicting how the season will end. This season will be the first time a playoff system is used in place of the BCS system that college football fans endured over the last 15 years. While the format is different, one thing will be the same: high ticket prices for the championship game. Over the last four years, the average price to see a national championship game was $1,696.  The most expensive championship game was the 2010 match-up between Auburn and Oregon at University of Phoenix Stadium.  That game had an average price above $5,000, and will likely be the most expensive national championship ever.  At an average price of $927, last years game at the Rose Bowl between Auburn and Florida State was the cheapest over the last four years. Om game day, tickets were going for as little as $410.  Regardless of what the first championship game decided by a playoff costs, anyone who buys a ticket on the secondary market will is likely to pay above face value.  Unless, that is, you’re willing to make a bet on your favorite team making it.

Thanks to an interesting company called TeamTix, fans looking to attend the championship game have a chance to reserve tickets at face value.  Teamtix works directly with the College Football Playoffs and gives fans a chance to lock-in a face-priced ticket if their team makes it.

TeamTix are team specific reservations for the right and obligation to purchase a face value ticket to the National Championship, if and only if your team qualifies to play in the game. The price of the face value ticket(s) is an additional amount you pay over and above the price you paid for your TeamTix, if your team qualifies for the game. If your team does not qualify to play in the National Championship, you will not receive a refund for the purchase of your TeamTix.

According to the USA Today preseason poll, Florida State is the top ranked team, while Alabama is second. Oregon is ranked fourth in the nation and Ohio State is sixth. However, based on the current prices for a face price reservation, the ticket market thinks Alabama has the best chance to play for the national championship. At $169, Alabama currently has the highest reserve price. That number is easily the most expensive of any team in the nation, and just $22 less than the average price of Alabama Football tickets this season at Bryant Denny Stadium.

The only team that comes close to Alabama is Florida State with a reserve price at $125. For Florida State, they enter the season as a championship favorite as well as defending national champions. After underachieving for several years, the Seminoles finally broke out with an undefeated season in 2013. They were led by Heisman Trophy winner quarterback Jameis Winston, and had talent all over the field. This season many of the starters return, and Florida State added another impressive recruiting class.  Like Alabama, the reserve price for a National Championship ticket is very close to the average price of Florida State football tickets at Doak Campbell Stadium.  Over the course of the season, fans will pay an average price of $104 to see Florida State defend its title at home. The most expensive game in Tallahassee this season is against Notre Dame, while the cheapest game is the home opener against Citadel.

The new College Football Playoffs system means four teams will have a chance to battle for a national championship after the regular season. It’s the answer to years of lamentations during the BCS era, and it will surely be exciting for fans. If you feel good about your team’s chances to make it to the national championship at AT&T Stadium, it might be wise to look into a face price reservation before they start climbing the polls.  Like any market, face price reserve prices can change dramatically based on what happens on the field. The below chart from last season is a striking illustration of what can happen after a big win, or loss.  It shows the average price of an Alabama reservation before and after their historic Iron Bowl loss to Auburn. 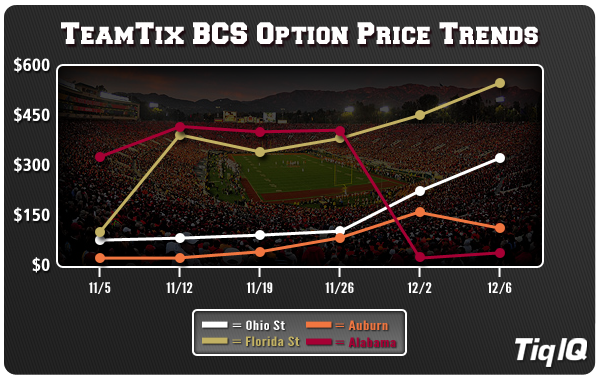 Below is the full list of the top 10 most expensive face price reservations as of today: