Heading into week eight of the college football season, it was known that the Michigan job would be open at the end of the season. Now, it’s almost a certainty that the Florida job will be open in December as well. Texas and USC replaced coaches after the 2013 regular season. These are not dull times in the coaching profession. The editors of The Student Section discuss the situation at Florida, wondering how soon athletic director Jeremy Foley should move to fire Will Muschamp.

What scenario, if any, will get Will Muschamp fired before the end of the regular season? Should Florida give serious consideration to firing Muschamp at any point before the Florida State finale?

As a general rule, I don’t think schools should fire a coach before the end of the season. After all, if the school had any doubts about whether the coach was the right guy to lead the program for the entire year, there’s no way he should have been on the sideline in the first place.

While that’s a solid guideline to use, it’s not an absolute. The moment that it’s clear that a coach has lost control of the program, it’s time to make a move right then, just like Kansas did with Charlie Weis.

Does Muschamp fall into this category?

Yes, he sure does. Much like Weis, Florida’s poor offensive numbers merit his dismissal right now. During his time in Gainesville, the Gators have finished 105th, 104th, 115th and are currently 101st in nationally in total offense.

Even Alabama and Michigan State would have trouble winning with those numbers.

So, why’s the offense so horrid?

By the same token, the struggles on offense aren’t because of the offensive coaches, either. Brett Pease (2012-13) and Kurt Roper (2014) both excelled as offensive coordinators at Boise and Duke, winning games against superior competition despite having lesser talent to work with. Given the abundance of athletes Florida has its disposal, there’s no reason the Gator offenses shouldn’t have been as a explosive as the Fun-and-Gun attacks of yesteryear.

Regardless of whether the problem is the players, the system, or a simple case of a head coach micromanaging every detail of the offense (as I suspect), the bottom line is that the buck stops with Muschamp. He, and he alone, was responsible for making the Florida offense more explosive in order to keep up with the high-octane attacks of the SEC. He’s failed to do that.

That’s why Jeremy Foley should show him the door. The days of running the ball 50 times, playing defense, and winning games 10-7 are as obsolete as the old Southwest Conference. It’s time for Florida to bring in someone with a proven track record as a head coach, who understands that both sides of the ball are important.

Wouldn’t it be ironic if the Gators chose Mack Brown — who named Muschamp as the head coach in waiting at Texas?

It should be unanimous that Will Muschamp ought to be gone at the end of the season; the only remaining question concerning his tenure in Gainesville is if he’s allowed to finish the season.

Yes, plenty of Florida fans want Muschamp gone immediately. It’s natural to want a coach to leave when it’s already painfully clear that his tenure at a school is beyond saving. Yet, the very realization that a coach won’t be around next year is not, in itself, a legitimate justification for removing the coach in the middle of the current season.

Off-field controversies and players flatly quitting should lead to instant removals; short of those kinds of alarming scenarios, the lame-duck coach should be allowed to finish his final season. What adds to the case against an immediate firing of Muschamp is that he brought Kurt Roper in as offensive coordinator. Is it fair to Roper to have him exist on an island for the rest of this season? Doug Nussmeier at Michigan left Alabama, so he faces a softer landing if Michigan’s new head coach doesn’t retain him. Roper might not have that kind of pull in the 2015 (or December 2014) job market. Muschamp needs to take this bullet — a bullet that’s delayed until after Florida State and the completion of the regular season.

The only event that could justify a firing before the season finale? Losing to Georgia in much the same way Florida lost to Missouri. A total stink-bomb in one of college football’s few remaining neutral-site rivalry games — the one Florida wants to win more deeply than any other SEC rivalry game — could create enough psychic embarrassment and damage that Muschamp should not be allowed to survive any longer.

Keep in mind, though, that a very high (or rather, low) standard of embarrassment needs to be reached against Georgia if Jeremy Foley is to pull the quick trigger. 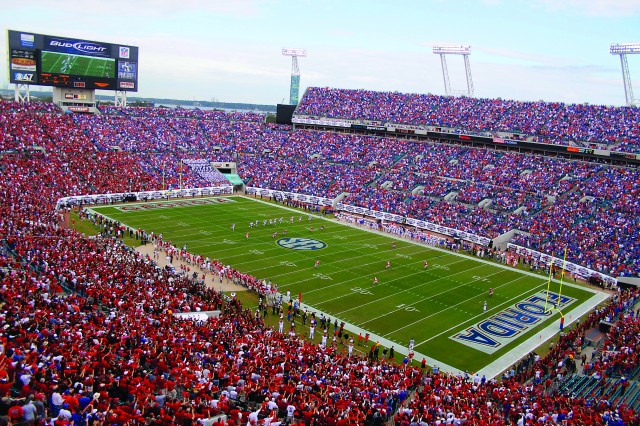 If Florida gets embarrassed by Georgia in Jacksonville, the Cocktail Party might not be the scene of many drowned sorrows for Florida fans… because it might get Will Muschamp fired sooner rather than later, something many Gator partisans would certainly welcome.

There are only two reasons you fire a coach in season.

For the first one, you can sort of see stuff coming apart at the seams, so there remotely exists that possibility. As made the rounds on the Interwebs Sunday, a picture was shown of all of two Florida Gators going over to the crowd and singing the alma mater after the game. Now, losing sucks and you probably don’t feel much like any pomp and circumstance after games, but it was still an odd scene and one that makes you wonder if guys have just mentally checked out.

Florida, as I maintained after the game, has been a wildly immature team on the field since year one of Will Muschamp. The off-field issues have stopped … at least in terms of making national news … but the on-field immaturity is immense.

When you see Muschamp acting like a frat boy after their win against Tennessee in Knoxville this year, it just sort of reaffirms what everyone knows about coaching and sports, and that’s the old axiom of the team following the coach’s identity.

In-fighting with players also has happened within the past few weeks to the point where law enforcement was summonsed. There certainly are the outward warning signs of total program loss within the walls, and remember, the media and the public sees about 10 percent if that of the whole picture. Only those within the athletic department or the team can truly know if issue number one listed above is one that exists.

Which leads us to number two, which is a non starter at Florida. No assistant looks ready to assume that type of job and even if one were, it’s hard to suggest Florida would even begin to consider handing the gig over to a coach that hasn’t been a head coach at the collegiate level after this snafu.

Florida football did this once before, going outside the box and bringing in Ron Zook before departing from him and taking a sure-fire candidate with experience running a program and doing it successfully: Urban Meyer.

You would have to assume that wherever the Gators’ brass goes from here, it’s with someone that has proven ability running a program again.

The World’s Largest Outdoor Cocktail party will be the chance to see if the players come out and fight for their embattled coaching staff. Florida Georgia Line plays on Halloween night down there the night before the game. The Florida Georgia Line on Saturday is thin for the Gators and a season/program going completely off the rails.