The Champions Classic in Indianapolis Tuesday night was just that — it felt like a collection of heavyweights, and the product in no way disappointed… unless you’re a member of Rock Chalk Nation.

The matinee, featuring Duke and Michigan State, gave us an opportunity to see a Blue Devil team that has nine McDonald’s All-Americans, matching this year’s Kentucky squad with the most ever. The nightcap put a generationally good Kentucky squad against Kansas, the class of the Big 12.

Each team involved in Tuesday night’s doubleheader was able to gain a significant takeaway from the first high-profile contest of the young season. While three teams had a positive feeling after the twin bill, one team is left with a bitter taste in its mouth.

Though we knew coming in that Duke may have the best player in the country, with the likely top NBA draft pick in Jahlil Okafor, the Blue Devils proved that they are more than just a one-man show. Okafor did not disappoint with 17 points, five rebounds, two blocks, and two steals. Already for the season, Okafor is shooting 83.3 percent from the floor. However, Duke had four players with at least 15 points against Michigan State. While Okafor will likely win the top individual awards this season, it is the supporting cast that puts Duke among the nation’s elites in 2014-’15.

Freshman Tyus Jones led the attack for the Blue Devils and was rock solid, with four assists and no turnovers. He also added 17 points on 4-5 shooting and got to the foul line seven times. Jones showed the ability to take over the game after not showing much aggression in the first half, scoring all 17 points in the second half. He fueled a run which eventually put some distance in between the Blue Devils and Michigan State. Jones, showing the ability to take over the game by scoring when needed, will determine how far the Blue Devils can go this season. 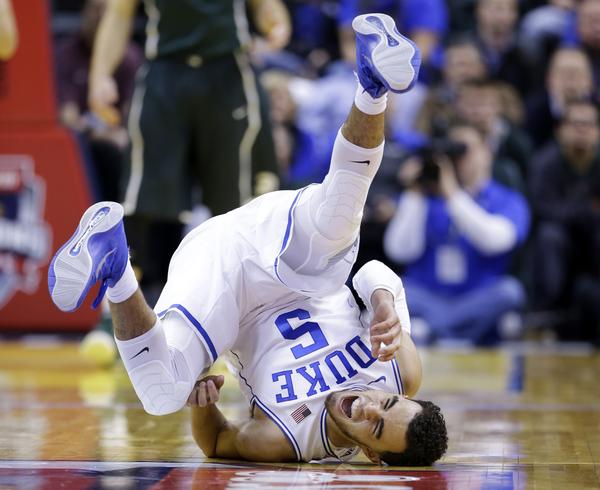 Duke’s Tyus Jones might have been knocked around at times on Tuesday night against Michigan State, but when you’ve just scored a basket in a game you significantly altered for the better, who has time to feel pain? Jones and his Duke teammates had a lot of fun — they showcased their offensive skills, which were too much for the Spartans.

Justise Winslow also is the real deal. While he struggled on the night, to the tune of a 4-11 performance from the field, Winslow provided 15 points and six rebounds. He also gave Duke some needed toughness inside, especially when Okafor got into foul trouble down the stretch.

The biggest concern with Duke in the aftermath of the Champions Classic is its lack of depth. Four starters played at least 30 minutes, making them the anti-Kentucky. While the rotations may have to improve, Duke is still incredibly talented and is far more than just Okafor. With its talented class, Duke is arguably the second best team in the land, with Arizona in the mix.

Though many view this as a down year for the Spartans and feel that they are overrated just being in the top 25, have we not learned our lessons yet? Don’t doubt Tom Izzo.

The biggest takeaway for Michigan State is the sheer athleticism it has, especially on the front line. The Spartans outrebounded Duke 33-22, and it felt like about half of those boards were offensive putbacks that kept them in the game for a while. All nine players who found the floor for Michigan State scored and had at least one rebound, while seven had three or more. Five players had at least one assist.

Denzel Valentine paced the scoring early, but had a hard time getting going in the second half. Branden Dawson was an efficient 8-of-10 from the floor for 18 points, and he finished just a rebound shy of a double-double. While Travis Trice struggled a bit behind the 3-point line, he excelled inside it, shooting 7-10 on two-pointers. He also ripped down six rebounds and dished out eight assists. Dawson and Trice are both shooting over 50 percent for the season, and when Valentine gets into the mix, the trio will be an extremely tough three-headed monster.

While there is a lot of doubt surrounding this Michigan State squad, have faith, because it will be just fine when it gets into Big Ten play. Expect the Spartans to make another Tom Izzo-like run come March. They may not be talented enough for another Final Four, but this squad will still be a tough out.

The Jayhawks were the team that found it hard to take away any positives from Tuesday night. Even Bill Self might have been tempted to search for a stiff drink after the game. However, let’s face the facts: Kentucky will have a lot of opposing coaches searching for the alcohol cupboard this season.

Kansas was about as bad as it has been in the Self era Tuesday night. With sky-high expectations this season, the Jayhawks suffered their largest margin of defeat under Self (32). They endured their worst field goal percentage (19.6), fewest field goals made (11), and the fewest points scored (40).

While the numbers were low, Kansas did one thing well – it got to the tin. Finishing was the problem. The Jayhawks shot 3-17 in the paint in the first half, and Kentucky rejected eight shots and forced several more altered attempts.
The best news for Kansas: it will not be Kentucky every single night. With the speed and athleticism the Jayhawks possess, they will be just fine in the Big 12. Tuesday night simply showed that they will struggle with size and shot-altering length. The follow-up is that no other team has the size and length of Kentucky.

One question: Is this the same team that trailed Buffalo by five at halftime on Sunday?

The Wildcats completely and utterly dismantled a very formidable Kansas squad. Sticking with his “platoon” method, John Calipari has almost no drop-off when he goes to his second wave of potential NBA first round picks and McDonald’s All-Americans.

Not only can this Kentucky team score at will from any spot on the floor, meshing smooth shooting with bruising paint play; the Wildcats are difference makers on defense as well. The Wildcats had 11 blocked shots for the game, as Karl-Anthony Towns and Marcus Lee added four each on opposite sides of the platoon.

Only two players played over 20 minutes for the Wildcats. While that keeps a squad fresh, you have to wonder if that will negatively affect their offensive rhythm at some point. Calipari says no, but it is hard to get anything going when you have a new wave coming to the scorer’s bench every five minutes. Only time will tell in that aspect of play, but this Kentucky team is for real. It’s not every day that you see a national power dissected like Kansas was Tuesday night. With these Wildcats, get used to it.

With the length and size Kentucky has inside, the only blueprint to beat them is knocking down shots… and lots of them. It may take a team knocking down 10 or more 3-pointers to beat the ‘Cats.