For college sports fans, it’s a bit of a dead period. The College World Series will be here soon, but the Final Four has long passed and the start of the 2015 college football season is still months away.

Politics have been in the news lately with a number of candidates announcing their decisions to run for president in 2016. Rarely do sports and politics mix very well, but for a select few, they do. Here are nine star athletes who successfully ran for prominent office:

Dave Bing was an All-American guard at Syracuse, averaging more than 22 points in each of his three seasons with the Orangemen. After ranking fifth in the country with an average of greater than 28 points as a senior, Bing spent 12 seasons in the NBA with the Detroit Pistons, Washington Bullets and Boston Celtics. In 2009, Bing became the 74th mayor of the city of Detroit, but the Democrat did not seek reelection.

A former Democratic Senator and presidential nominee, Bill Bradley was one of the best basketball players in the country during his time at Princeton. As a senior for the 1964-65 season, Bradley was named an All-American and led the Tigers all the way to the Final Four, where they were defeated by Michigan. In the consolation game victory over Wichita State, Bradley set a NCAA Tournament record by scoring 58 points. Bradley would go on to spend 10 years in the NBA with the New York Knicks and helped them claim the 1970 world championship before being elected to the U.S. Senate in 1978.

Known more for his big league career, Jim Bunning threw three 1-hitters for the Xavier freshman team in 1950 before being signed by the Detroit Tigers. Bunning would be a 9-time All-Star at the Major League level. Bunning led the American League in wins in 1957 and finished second in the 1967 National League Cy Young Award voting. Running as a Republican, Bunning was elected to the U.S. House of Representative from Kentucky in 1987. He was voted to the Baseball Hall of Fame in 1996 and elected to the U.S. Senate in 1999.

Before becoming the 41st President of the United States, George H.W. Bush was a slick-fielding first baseman and captain for Yale teams that reached the College World Series in 1947 and 1948. Prior to a 1948 contest against Princeton, Bush was presented a copy of Babe Ruth’s autobiography by the Babe himself. 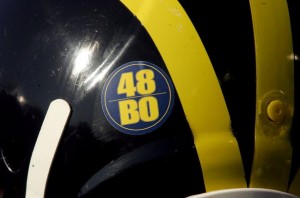 PASADENA, CA – JANUARY 01: A detail of the “48|BO” label worn by the Michigan Wolverines in honor of the late President Gerald R. Ford and legendary head Coach Bo Schembechle during Rose Bowl against the USC Trojans on January 1, 2007 at the Rose Bowl in Pasadena, California. (Photo by Stephen Dunn/Getty Images)

Best known for being the 38th President of the United States, Gerald Ford was winning national championships long before winning elections. As a center and linebacker at Michigan, Ford helped the Wolverines to perfect seasons and national titles in 1932 and 1933. Following his senior season in 1934, Ford was selected to the college football All-Star team and got to play against the Chicago Bears. A Republican, Ford was never actually elected president, but was Vice President for Richard Nixon and took over after Nixon’s 1974 resignation. Ford was however, elected to the U.S. House of Representatives in 1949.

California’s Kevin Johnson made the PAC 10’s first team as junior and a senior before playing 12 seasons in the NBA. During his 1986-87 senior season with the Golden Bears, Johnson averaged better than 17 points and 5 assists-per-game. Johnson was selected seventh overall by the Cleveland Cavaliers in the 1987 NBA Draft and went on to be a three-time All-Star in the NBA with the Phoenix Suns, helping the team reach the 1993 NBA Finals. Johnson’s No. 11 jersey has been retired at Cal and late in 2008, Johnson became the 55th mayor of his native Sacramento. Johnson, a Democrat, was reelected in 2012 and is the first African American mayor in the history of California’s capital city.

The 1996 running mate of Republican presidential nominee Bob Dole, Jack Kemp enjoyed 12 seasons playing professional football in the NFL, AFL and CFL. At 6’1″ and 200 pounds, Kemp led the nation in passing as a senior at Occidental College and was named a Small College All-American. Kemp went on to be a seven-time AFL All-Star and was named the league’s MVP in 1965. Kemp was first elected to major office for New York’s 39th district in the U.S. House of Representatives in 1971. 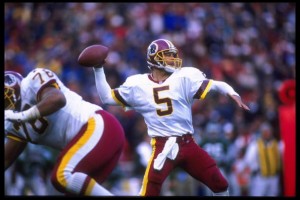 26 Nov 1995: Quarterback Heath Shuler #5 of the Washington Redskins sets to throw during the NFC match up against the Philadelphia Eagles. The Eagles defeated the Redskins 14-7 at RFK Stadium in Washington D.C. Mandatory Credit: Doug Pensinger/Allspor

The 1993 Heisman Trophy runner-up to Charlie Ward, quarterback Heath Shuler passed for nearly 4,100 passing yards and accounted for 50 touchdowns during his Tennessee career. Shuler went third overall in the 1994 NFL Draft to the Washington Redskins. The former Tennessee standout threw just 13 touchdowns and 25 interceptions in three seasons with the Redskins, but his career in the nation’s capital wouldn’t end there. In 2006 — eight years after his NFL career had ended — Shuler was elected to serve North Carolina’s 11th district in the U.S. House of Representatives as a Democrat.

J.C. Watts may be a Republican, but during his days playing for Barry Switzer, the support from Sooners’ fans was nothing short of bipartisan. An option quarterback, Watts recorded 34 rushing touchdowns in his three seasons as the Oklahoma starter. Watts closed his career by leading the Sooners to consecutive Orange Bowl victories over Florida State and a pair of top-3 finishes in the AP Poll. Watts played six years in the CFL and was elected to the U.S. House of Representatives in 1994. He was a congressman for eight years.