It’s widely regarded as the most important position on the field, but the early parts of 2015 are showing that long-term stability at quarterback isn’t as vital as it once was.

Eight of this week’s top 15 teams, according to the AP Poll, are being led either by a backup or a transfer quarterback. That doesn’t include defending national champion Ohio State, which played musical quarterbacks this week in a lackluster 20-13 victory over Northern Illinois.

Michigan State’s Connor Cook and TCU’s Trevone Boykin have their teams in the middle of the national championship race as expected, but this week’s biggest mover, Ole Miss, is being led by a quarterback who finally seems to have his head in the right place.

After an embattled career at Clemson, Chad Kelly passed for 341 yards and accounted for four total touchdowns in a 43-37 Ole Miss victory at No. 2 Alabama.

Entering the year, Notre Dame was expecting big things of Malik Zaire, who had the task of replacing Everett Golson. Zaire ousted the more experienced Golson late in 2014 and was off to a brilliant start for the Fighting Irish, but suffered a season-ending injury in a 34-27 week-two victory over Virginia.

Sophomore DeShone Kizer came in and led a late rally in Charlottesville before completing 70 percent of his passes and tossing three touchdowns in his first career start on Saturday, as Notre Dame handled No. 14 Georgia Tech, 30-22.

At his new home in Tallahassee, Golson is shaking off his old tendency to turn the ball over. It’s been an up-and-down start for the new Florida State signal-caller, but Golson has yet to fumble or throw an interception while tossing six touchdowns for the No. 10 Seminoles. 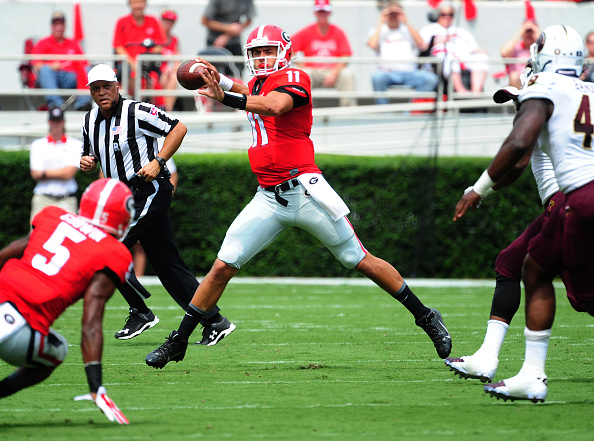 Virginia transfer Greyson Lambert had a record-setting day for Georgia in a 52-20 win over South Carolina on Saturday. Lambert completed an NCAA-record 96 percent of his passes, going 24-for-25 for 330 yards and three touchdowns.

The greatest day for an Oklahoma quarterback also came on Saturday, as Texas Tech transfer Baker Mayfield accounted for 554 total yards and six total touchdowns in a 52-38 win over Tulsa. The previous week, Mayfield came into his own with the Sooners by leading them back from 14 points down in the fourth quarter for a 31-24 overtime road win against a ranked Tennessee team.

Alabama’s week wasn’t one to remember, but quarterback Jake Coker seemed to finally separate himself from the younger Cooper Bateman. Coker accounted for four total scores in the Crimson Tide’s loss to Ole Miss. Coker lost out on the starting job last season to Blake Sims after being stuck behind eventual Heisman Trophy winner Jameis Winston at Florida State in 2013.

While Coker was stuck behind a Heisman winner, Eastern Washington transfer Vernon Adams had the daunting task of trying to replace one as he arrived in Eugene, Oregon, to try to parallel the production of the No. 2 overall pick in the NFL Draft, Marcus Mariota.

Adams went 1-1 in his first two starts with Oregon before missing Saturday’s game against Georgia State with a broken finger on his right hand. In his place, junior Jeff Lockie went 23-for-31 passing for 228 yards and a pair of scores in a 61-28 victory. Mariota may be gone, but with either Lockie or Adams at the helm, the Ducks continue to have the look of a contender in a wide-open Pac-12.

For college football fans who like nail-biters, the team to watch has been No. 23 BYU. Things looked bleak for the Cougars after senior Taysom Hill suffered a season-ending injury in the opener, but backup Tanner Mangum has had a flair for the dramatic.

Mangum got the Cougars off to a 2-0 start after completing a Hail Mary as time expired to beat Nebraska, and a fourth down heave into the end zone to upset Boise State. Mangum’s Cougars came up short in a 24-23 loss to No. 10 UCLA on the road Saturday, but Mangum passed for 244 yards and has fans in Provo still optimistic after losing their emotional leader.

The season is young, and how these quarterbacks perform over the next 10 weeks remains a mystery. If the early part of 2015 has taught us anything however, it’s that the days of needing to sit and learn or take time to adjust to a new system are long gone. Judging by this week’s individual performances and national rankings, it doesn’t seem to be such a bad thing.