Punishment is a very thorny subject — as a matter of morality, sure, but more fundamentally as an effective deterrent to future bad behavior.

Punishment is always difficult to confront for human beings because the need to feel emotionally satisfied about the past and the need to create a safer future are not one and the same. Those two needs — to feel that justice has been done on one hand, and that future wrongdoing will be reduced on the other — often militate against each other. It’s true in matters of life and death, and it’s true in the less significant (but still very human and economic) world of college sports.

The collapse of Baylor athletics had developed over the past several years as a matter of practice, but it was made fully known on Thursday with the dismissal of Art Briles and other shakeups in the university’s upper reaches of power. This appalling state of affairs in Waco reminds us all of Penn State, the kind of moral black hole which was supposed to prevent Baylor-like events from happening.

One argument you’re hearing right now — which will continue to be made in the coming weeks and months — is that Baylor happened because the NCAA didn’t insist on banning Penn State from playing football for at least a year. 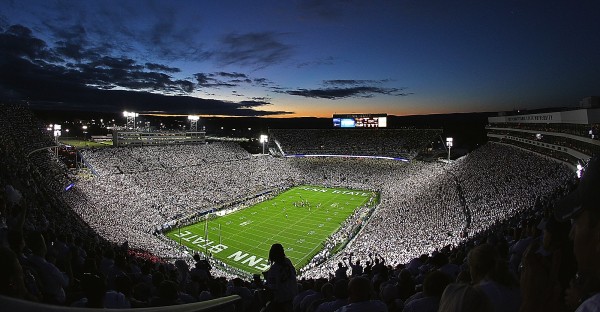 I get it. You get it. We all get why the “NCAA needed to ban Penn State football” argument is powerful and hard to ignore. When the games stop, and therefore, when the victories stop, people who otherwise wouldn’t take notice of off-field injustices begin to pay attention.

Yet, when the Penn State story dominated the news cycle at the end of 2011 and the start of 2012, a number of significant counter-arguments — ones which did not deserve to be dismissed — emerged to support the idea that Penn State should continue to play football.

One argument: Keeping a bowl ban is fine, but the school needs to be able to play games on Saturdays so that the local community and its many game-related business outlets receive the economic boost they depend on. Essentially, don’t punish innocent small-business owners.

A second argument: Don’t punish innocent players for the actions of coaches and other non-athletes; in a related vein, don’t punish players for actions which occurred many years before they stepped on campus.

Don’t punish innocents: Banning a football program for a season would undeniably have that effect, to a certain degree. Yet, those who feel the NCAA should have banned Penn State football for at least a year certainly think the act of banning carried a greater good which outweighed any injustice toward small-business owners or Penn State players. Others who supported the ban might not have focused on the topic of deterrence, instead emphasizing that it would have been an appropriately severe punishment for the sins of the past. Either as a contribution to the future or retribution for previous sins, banning Penn State football carried a measure of both resonance and legitimacy.

We return to the heart of the matter: Punishment is consistently thorny. No matter how emotionally satisfying — or situationally appropriate — a given punishment might be, someone almost always gets hurt by a punishment, either because it’s too light or because it’s too severe. Punishment must be properly calibrated, accounting for the need to reshape the prevailing culture in a positive way, not just to gain retribution for past-tense crimes or sins.

One of the most salient questions anyone can ask when contemplating the severity of a punishment toward a person or community is this: “Can I punish the wrongdoer more lightly and still create a deterrent effect, or do I have to punish at a certain level of severity in order to bring about the proper process of rehabilitation, reformation and conversion I want to see from the wrongdoer?”

Plenty of people felt — and still do — that the NCAA never should have had anything to do with Penn State. These were crimes, not violations of an organization’s bylaws. These were outrageous and horrifying acts which needed to be policed and punished by law enforcement, not a college sports body. Given this tension point in L’Affaire Penn State, the idea that any NCAA-provided punishment would create a deterrent effect was — if not flawed — rendered questionable.

One could argue that people so invested in power and prestige as Graham Spanier, Tim Curley, and Gary Schultz (the lead Penn State administrators who presided over the cover-up in State College) won’t be held back by stiffer NCAA penalties. They and people like them — think of Ken Starr and Ian McCaw at Baylor — won’t naturally consider the NCAA when they’re busy building stadiums and trying to preserve the profitability of their football program at every turn.

Then realize that it’s only half of the larger discussion.

If you think NCAA-delivered punishment might not be a deterrent, you’ll get plenty of disagreement. However, that’s merely the back end (oriented to the future). What about the front end, the retributive part of the puzzle?

The NCAA is supposed to punish member institutions which do not follow its bylaws. The NCAA (whether you think it’s right or wrong to do so) nails programs which engage in improper recruiting; allow ineligible recruits to play; and (among other things) give certain kinds of material or situational benefits to athletes which are not allowed. The crimes of Penn State, much like the crimes of Baylor, exist in very different realms compared to what the NCAA generally punishes.

For many, therefore, this is not an NCAA issue, and that Penn State never WAS an NCAA matter. You’ll find plenty of people who think that governments and relative state or federal jurisdictions should take charge in Waco, not the NCAA.

As you can see, many questions exist on the subject of how Baylor University should be punished, both in terms of procedure (by whom?) and effect (will this deter other schools?). Questions surround the ability of a punishment (whatever it might be) to strike the right balance between retribution (sending a message about what happened in the past) and transformation (creating the right culture in the future). These questions stand on their own, but they become particularly more emotional and polarizing to the extent the NCAA is involved in them. The NCAA is not a trusted moral arbiter, and its jurisdictional presence in this kind of situation made the Penn State situation harder to resolve, not easier.

Where does this leave us?

Banning Baylor football for a year is the right thing to do. It seems to be a reasonable and not-overly-severe response to the magnitude of Baylor’s institutional and administrative wrongdoings. However, that idea — that wish — exists in a vacuum, because the NCAA is not the agency which should hand down that punishment.

Know what the best resolution to this awful situation would be? It would involve Baylor self-imposing the one-year ban.

First, such an action would tell the parents of female students at Baylor that they are taken (more, perhaps not fully) seriously. Second, the whole coaching staff could be fired on the spot, enabling the program to simultaneously clear the deck and give the next coaching staff (in 2017) adequate time to face the situation it would inherit. Third, the self-imposition of a substantial penalty would make it highly unlikely that even if the NCAA got involved, it would impose yet another ban for the 2017 season.

Fourth — this is the biggest reason — Baylor’s Baptist identity calls the school to be a beacon for others, an example of the Christian faith. A self-imposed ban would represent an act of contrition, of penance. These are Catholic terms for many, but they’re generally Christian concepts beyond any denominational prism.

Baylor has been serving two masters, to use a reference from Scripture. God and (football-based) money compete for the school’s attention. Self-imposing a ban would show the Waco community and the Baylor community that God matters more than mammon.

It is easy to clamor for NCAA action in the Baylor situation, but think of how much more powerful it would be if the school is the one to impose the ban, and not because of NCAA-related pressure. Think of how genuine a statement it would be if Baylor takes a leadership position on this issue, and concurrently spends time in consultation with law enforcement agencies on how to be a better community partner.

Most, if not all, people think Baylor shouldn’t play football for at least a year. That’s not the most debatable point on the table. The key questions are, “How should that ban be arrived at? Who should impose the ban?”

If the NCAA is your first answer, consider other options. Yes, many of us want the same end result, but the “how” of a punishment matters along with the “what.”