1 Burning Question: Can the Buckeyes repeat as national champions?

Urban Meyer’s Ohio State Buckeyes were supposed to be a year away from a national championship run when they took the field last season.

This idea gained even more traction after the Buckeyes lost star quarterback Braxton Miller to injury. Then-redshirt freshman J.T. Barrett had zero on-field experience, and it showed in his second ever start against Virginia Tech. The Buckeye coaching staff had the tough task of ushering in four new starters on the offensive line, while also trying to balance which offensive weapons would produce the most explosive offense.

It’s funny how much can change in a year.

Miller finds himself at a new position — trying to prove that he is the best athlete in all of college football. Barrett is elbow-deep in a position battle with fellow signal caller Cardale Jones, despite finishing fifth in the Heisman Trophy voting a year ago.

The offensive line returns four starters and has formed an unquestionable chemistry with running back Ezekiel Elliott, who enters the season as one of the favorites to win the Heisman after running for 696 yards in three postseason games (counting the Big Ten Championship Game).

Despite having two new offensive coordinators in Ed Warinner and Tim Beck, the Buckeyes will see much of the same offensively in 2015. Eighty-eight percent of Ohio State’s offensive production returns from a year ago. That doesn’t include what’s expected from Miller — who is one of the top five playmakers in college football.

Combine that with the fact that Ohio State’s opponents on the road in the Big Ten Conference went 10-22 last year, and it becomes clear that the road is a lot smoother for OSU than a handful of others in the country vying for a spot in the College Football Playoff.

That doesn’t mean the Buckeyes won’t face any tests, though.

Ohio State will open things up on September 7 against a Virginia Tech team that defeated the Scarlet and Gray at Ohio Stadium a year ago. The Bucks will have to take on VT and its top defensive line unit without their best defensive playmaker, Joey Bosa, and H-Backs Jalin Marshall and Dontre Wilson. All three players are out of the lineup due to suspension.

If there is any lock for the College Football Playoff, though, before the start of the season, it’s the Ohio State Buckeyes.

3.95 — The amount of yards per carry Ohio State gave up against the run last season. When you give up nearly 400 yards rushing to Navy in the first week of the season and then follow that up throughout the year by allowing monster performances from studs like Tevin Coleman (228 yards/28 carries) and David Cobb (145 yards/27 carries), it shouldn’t be surprising to note that Ohio State’s biggest weakness was stopping the run. Things improved down the stretch — just ask Melvin Gordon, who ran for just 76 yards in the Big Ten Championship Game.

The athletic ability of Tyquan Lewis will help up front, as will the plethora of depth that will rotate in at defensive line. In the second year of Chris Ash’s 4-3 scheme, it wouldn’t be surprising to see the Buckeyes cut that number down to near 3.5 yards per carry or better. The biggest part of improving the rush defense will need to come at the start of every series. The silver bullets gave up 4.72 yards per run attempt on first down last season.

45.5 — This is the percentage of passing downs on which the Buckeyes ran the football last year. According to SB Nation’s Bill Connelly, the NCAA average was 33 percent. Expect Ohio State’s percentage to rise in 2015, especially with Ed Warinner playing a bigger role in the offensive game plan. Tim Beck is also a big fan of running the quarterback out of the spread. Many see the Buckeyes as an explosive offense that likes to throw the ball a ton. In reality, the story couldn’t be any more different.

Why it matters: It would be nearly impossible for last year’s national champion to get back to the final four if it fell in the same trap it did last year. Urban Meyer is 13-0 on the road during his time at Ohio State, but he’s never brought his team to Blacksburg, where the Hokies are 134-39-1 under Frank Beamer. They’re also 18-1 in home openers and never trailed against Ohio State last season. Getting an impressive win without star Joey Bosa on defense, as well as Jalin Marshall, Corey Smith and Dontre Wilson on offense, would go a long way toward securing a spot in the CFP.

Why it matters: This is the biggest game on the Big Ten schedule all year. Over the last five years, Michigan State and Ohio State have built a major rivalry. Their matchup has reached the point where it generally decides the Big Ten title; it would have in 2012 as well, if Ohio State had been allowed to play in the conference championship game. A spot in the four-team playoff will be on the line this year if the Spartans can get past Oregon.

Why it matters: The Game is back. Jim Harbaugh is going to need a few years to build up the Michigan Wolverines to a national powerhouse, but his coaching instantly makes them a contender in any game they play. Many say the road to a playoff appearance ends with a win over Michigan State. If Ohio State goes into “The Game” with that mentality, the Buckeyes might miss out on defending the national title. 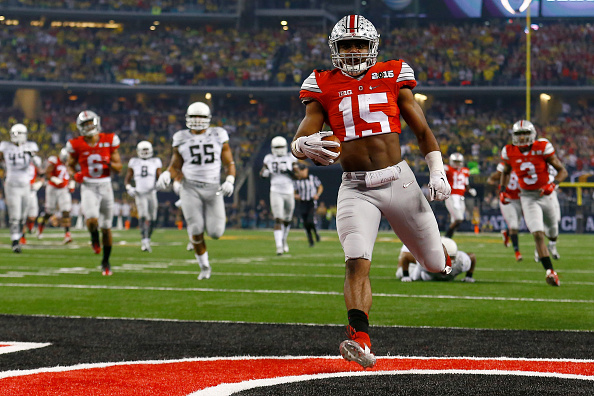 Ezekiel Elliott of Ohio State runs for a touchdown during the College Football Playoff National Championship Game at AT&T Stadium on January 12, 2015 in Arlington, Texas.

Ezekiel Elliott, RB – He’s considered the favorite to win the Heisman after an unbelievable playoff run which consisted of 696 yards rushing and a place in the Ohio State record books. Elliott had the second best rushing season in school history, despite rushing for just 76 yards in the first two games of 2014. He returns for his junior campaign completely healthy after wrist surgery in the off-season, and is attempting to build upon a year in which he averaged 8.7 yards per carry.

Joey Bosa, DE – After a year in which he compiled 13.5 sacks, NFL scouts pinned him as the favorite to be the top pick in the 2016 NFL Draft. Now, after an off-season full of scandal, there has to be some questioning of whether or not Bosa is ready to move on and grow up past his mistakes. He’ll have to sit out game one, but despite the issues off the field, it wouldn’t be surprising to see Bosa take over from week two onward to prove to scouts he is as good as advertised.

J.T. Barrett/Cardale Jones, QB – So many offensive weapons exist for Ohio State, but what will really matter at the ends of games is if either Jones or Barrett can be the conductor needed to run a very complex offense. Efficiency and decision making enable this offense to become truly dynamic. Luckily, Urban Meyer and company have a national champion-winning signal caller battling against the man who finished fifth in the Heisman voting a year ago.

Raekwon McMillan, LB – Joshua Perry and Darron Lee established themselves last year at linebacker, while senior Curtis Grant came out of nowhere as a defensive leader. This year, the defense will be run through sophomore Raekwon McMillan, who had an impressive showing as a freshman. Even though Grant played more down the stretch, McMillan logged more plays than him in nine games last season. The Ohio State defensive coaching staff has a lot of faith in McMillan and believe he can be the next in a long line of great OSU linebackers.

Ohio State fans have seen Miller do the impossible several times during his career. The two-time Big Ten MVP saw the field as a true freshman because he was the only viable player to make a big play. As a sophomore he led Ohio State to an undefeated record and was the only dynamic offensive playmaker for Urban Meyer during his first year in Columbus. Even as one of the best playmakers in school history, it makes sense that many questions accompany his move to wide receiver. Playmakers make plays, though, and at the end of the season, it wouldn’t surprise me if Miller becomes the all-time leader in total offense at Ohio State. He needs just 514 yards to pass Art Schlichter. He has the best footwork in all of college football and will be put into a position by the coaching staff to excel through his strengths.

Should Ohio State fans expect a playoff run of 696 yards in three games from Elliott in 2015? No. It will be nearly impossible to match that feat. Consider this — Elliott rushed for 70 yards or fewer in five games. In six games last year, he carried the rock 15 times or fewer. If Elliott averages 20 carries per game at his average of 6.88 yards per attempt, he would gain nearly 1,800 yards over a 13-game stretch. With the Buckeyes leaning on him in week one against Virginia Tech, there’s a possibility he could eclipse that total in a playoff run.

Bosa was the best player on the field last year and was able to get 13.5 sacks as one of the best defensive linemen in the country. So, how is he going to tally even more quarterback takedowns now that he will miss the season opener against Virginia Tech? The 6’6,” 275-pound beast will have an even better chance of getting off the edge with improved athleticism on the defensive line. Even with the year he had, Bosa went seven games last year without sacking the quarterback. That won’t happen in 2015. He has way too much to prove as he looks forward to his NFL career.

2. J.T. Barrett will win the Heisman.

Cardale Jones led the Buckeyes to a national championship on an epic three-game run. At any other program in the country, that would mean that the hero of a fan base would be a shoo-in to start the following year. Even after a championship run, Jones couldn’t overshadow the unbelievable performance from J.T. Barrett in 2014.

It’s hard to believe that the player who struggled mightily against Virginia Tech was the same one who broke 17 single-season records and two Big Ten records. Barrett led a record-setting offense in 2014, one which set a school record for passing yards, touchdowns and completions.

He tossed 34 touchdowns and had a Big Ten-leading 65-percent completion rate. Quietly, Barrett has put in a great summer and reportedly added nearly 20 pounds of muscle.

In my opinion there has never been a more efficient quarterback to play under Urban Meyer. Barrett has the ability to go down as the greatest quarterback in Ohio State history. That starts with an unbelievable campaign in 2015.

1. OSU will win the national championship.

There is a lot of pressure to answer to as a defending national champion, especially when most of the college football realm has an expectation of your program easily making its way back to the College Football Playoff. The Buckeyes have a better shot than anybody in the country at winning the national title. In this day and age, the only way to completely bypass opinion is to surpass any margin of error on the field. That too, is just to gain admission to the College Football Playoff.

After that, you have to master two other programs that have played at a similarly high level.

Ohio State is equipped with the most talented players, the most promising recruits, and the best coaching staff in the country.

All are great weapons to have in the quest to become just the eighth program in the modern era to win back-to-back titles.