1 Burning Question: Can the Trojans return to an elite level?

Steve Sarkisian enters year number two as the head man at USC and hopes to improve on a 9-4 campaign during his first year. Sarkisian is fortunate to have been the successor to Lane Kiffin as opposed to Pete Carroll, but with the Trojans ranked in the top 10 of the preseason Coaches Poll, big things are expected.

From 2003-08, USC won the Pac-10 every year. The Trojans played for three national championships and won two during the span. In the six years since, USC has finished in the top 10 just once and has not won a major bowl game. Meanwhile, the conference as a whole has increased dramatically in depth and for Sarkisian to become a beloved figure in Southern California, he’ll need to return the Trojans to the top of it.

167.1 — That was quarterback Cody Kessler’s passer rating as a junior in 2014, which quietly was tied for third best nationally. Kessler also ranked third nationally in completion percentage and fourth in touchdown passes. With Marcus Mariota and Brett Hundley now in the NFL, the Trojans may have the best quarterback in the Pac-12, which will go a long way in Southern California taking the next step.

2 — That’s the number of Pac-12 games last season that the Trojans lost in the final 10 seconds. USC allowed Arizona State to score 13 points in the final 2:43 including a 46-yard Hail Mary for a touchdown as time expired in a 38-34 loss at the Los Angeles Coliseum. The Trojans also watched Utah score the game-winning touchdown with eight seconds remaining in a 24-21 defeat. Had USC won even one of those games, it would have played Oregon for the Pac-12 title. If USC can make even marginal improvements as a team in 2015, it could be in for a very promising year.

Why it matters: The first real test for the Trojans, Stanford has in recent years replaced USC as one of the Pac-12’s premier powers. The contest will also serve as the Trojans’ Pac-12 opener and starting conference play off on the right foot could prove to be very important if Southern Cal is to make serious noise this season.

Why it matters: Arizona State is expected by many to be USC’s biggest challenger in the Pac-12’s Southern division. The Sun Devils’ will also be USC’s first road opponent for 2015 as well. For the Trojans, this contest also features a bit of a revenge factor as Arizona State defeated USC on a 46-yard Hail Mary from Mike Bercovici to Jaelen Strong as time expired. Had USC been able to knock that pass down, it would have propelled the Trojans to a berth in the Pac-12 Championship game. This year’s contest could carry similar implications.

Why it matters: This one could ultimately prove whether or not USC belongs back on the national stage. Since the Trojans last won a major bowl game in 2008, Oregon has become the conference’s preeminent power, winning four Pac-12 titles and appearing twice in the national championship game. The Autzen Zoo is a tough place to play and the Ducks are again expected to be near the top of the Pac-12. It’s possible that these teams could meet twice in a three-week span, but being able to win in Eugene would send a huge message to the rest of the country. 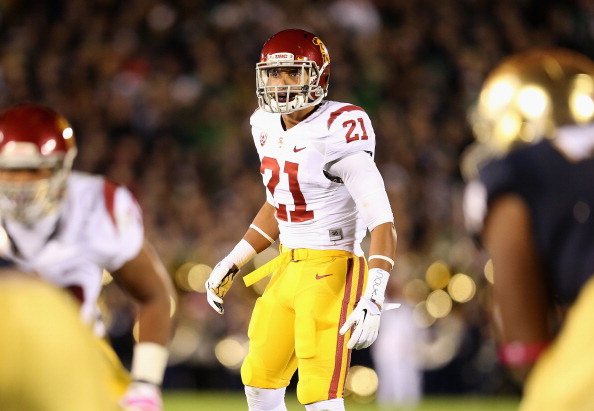 Cody Kessler, QB — Quietly one of the nation’s best passers in 2014, senior Cody Kessler returns after throwing for over 3,800 yards, completing nearly 70 percent of his passes and tossing 39 touchdowns compared to just 5 interceptions. If Kessler can have even a similar year in 2015, he could end his USC career as one of the most accomplished passers in school-history and become a dark horse for the Heisman Trophy.

JuJu Smith, WR — With Buck Allen and Nelson Agholor off to the NFL, JuJu Smith will be the go-to guy for the USC offense this season and the returning leader in yards from scrimmage. Smith is a big target at 6’2″ and 215 pounds. Now a sophomore, Smith finished with 724 yards receiving last season to go along with 5 touchdowns. As the go-to guy, Smith may need an even bigger season for USC to make major moves in the Pac-12.

Su’a Cravens, LB — A junior linebacker, Su’a Cravens is coming off a big season in which he finished fourth in the Pac-12 with 17 tackles for loss and was tied for fifth in the conference with 3 interceptions. At 6’1″ and 225 pounds, Cravens is a sideline-to-sideline linebacker, which makes him perfect to combat the many spread offenses in the Pac-12. USC was largely inconsistent as a defense last season and if it is to make big strides in 2015, Cravens will be a big reason why.

Adoree’ Jackson, CB — After finishing second on the team in pass break-ups, Adoree’ Jackson looks to be in for a big season in 2015 in a pass-happy conference. Jackson isn’t big at 185 pounds, but is a speedster on the outside and incredibly difficult to stretch the field against and is a decent tackler. Jackson did not record an interception a season ago, but did just about everything else well for the Trojans.

The Trojans close the month of September with two difficult contests against Stanford and Arizona State. Stanford will serve as a real test for USC, but having that game at home will be a big help. The Trojans will follow that up with a huge win in Tempe against an Arizona State team that many feel will be their biggest competition in the South division.

Having to play both Stanford and Oregon from the North division while visiting Arizona State gives USC arguably the toughest road to the conference’s title game, but with the talent USC has, getting there is still doable. Three of USC’s four losses a season ago were by six points or fewer and the Trojans may have been just two or three plays away from an 11 or 12-win season. As one of the few teams in the conference, who return a starting quarterback, USC will take the next big step and play for the conference crown.

3. Cody Kessler will pass for 4,000 yards and become a Heisman finalist.

After quietly having one of the best seasons of any quarterback in the country, Cody Kessler could easily become the first USC quarterback to become a Heisman Trophy finalist since Matt Leinart in 2005. Kessler is the nation’s second highest rated returning passer among players from major conferences. Kessler has an experienced offensive line to protect him and as the Trojans make strides as a team, the senior quarterback could be rewarded with a slew of individual honors.

It resulted in a victory, but USC hardly closed the season strong defensively, giving up 42 points in a Holiday Bowl victory over Nebraska. With Antwaun Woods and Delvon Simmons up front, Cravens at linebacker and Jackson and Kevon Seymour in the secondary, there is no shortage of talent for USC on defense. USC will also be facing quality teams in Arizona State, Oregon, UCLA and Notre Dame, who are replacing leading passers.

2015 will be a good year to be a fan of the Southern California Trojans. Despite a difficult schedule, USC has the talent to finish 10-2 in the regular season and earn a spot in the Pac-12 Championship. With a victory, USC would clinch a spot in one of the six major bowl games and with a loss, would still have a body of work strong enough to earn an at-large bid.