1 Burning Question: Will TCU build on last season and make the playoff this season?

Last season, TCU was clearly one of the best teams in the country, but a loss to Baylor kept the Horned Frogs out of the first playoff. TCU held a 21-point lead with 11 minutes remaining in the game and was unable to hold off Baylor. The burning question this season is if TCU can run the table and make the playoff this season.

Why buy TCU this year? The Horned Frogs may have been the best team in the country last season, and they were a second-half collapse away from going undefeated in the regular season and making the playoff. While there are still questions in the secondary, TCU returns most of the exciting offense from last season, one that will certainly light up the scoreboard quickly.

233 — The amount of passing yards per game the TCU defense allowed in 2014, which was good for 75th in the FBS. Losing leader Kevin White at corner will make it even harder on the Horned Frogs. If they are able to improve at all on this number, TCU could very well be an unstoppable force.

108.8 – On the opposite end, the TCU defense was quite stout against the run last season. The number is the amount of rushing yards per game the Frogs allowed. Returning some key contributors up front should lead to another strong performance. With some of the deficiencies in the secondary, a wall up front which can contain the run and pressure the quarterback will be vital to this team’s success in 2015.

Why it matters: Since joining the Big 12, TCU has lost the two road contests it has played against Oklahoma State. After getting pounded last season, an improved and more experienced Cowboy squad will be looking for revenge when it hosts the Horned Frogs. Looking at the schedule, it is the first major test they will probably have, unless Kansas State can cause problems for the Frogs on Oct. 10 in Bill Snyder’s lair.

Why it matters: Just like Oklahoma State, TCU has dropped two of the three games with Oklahoma since joining the conference. However, unlike the Cowboys, the Sooners put up a serious fight against the Horned Frogs last season. The four-point spread was one of only four games for TCU in which the difference was under 10 points.

Why it matters: This is clearly the game TCU has been eyeing for the past year. Baylor was the lone squad which stood between the Horned Frogs and the playoffs. The way they lost has to have left a sour taste in their mouths. The two teams will line up at the top of the conference again this season, and the “one true champion” will likely be decided in this game. 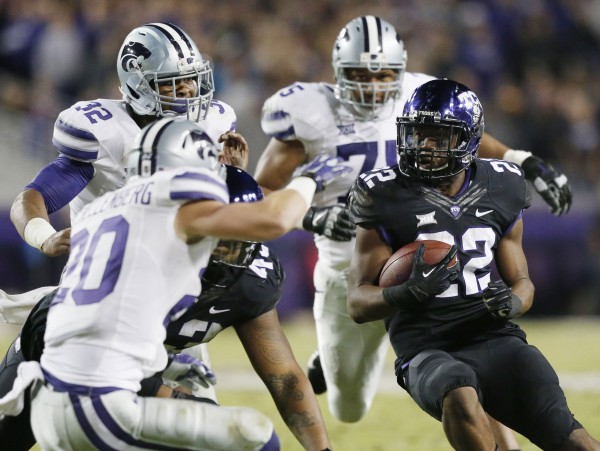 Trevone Boykin, QB – The video game numbers for Boykin were astounding last season. The signal caller led an offense that tossed 326.2 passing yards per game, which was seventh in the FBS, and 37 passing touchdowns. Boykin also rushed for 707 yards and produced eight scores on the ground. With the weapons returning around him, Boykin will be even better in 2015 and the undoubted team leader.

Aaron Green, RB – While Green did not top the 1,000-yard mark last season, it was not due to his abilities. The senior-to-be rushed for 922 yards, but averaged an impressive 7.1 yards per carry and scored nine touchdowns. For Green, it came down to touches in the explosive passing attack for the Horned Frogs. However, having a reliable option in the backfield helps open everything up even further.

Josh Doctson, WR – The 6-foot-3 Doctson provides a large target for Boykin. Expect the quarterback to take advantage of that, just as he often did in 2014. Last season, Doctson caught 65 passes for 1,018 yards and 11 touchdowns. The next leading receiver on the squad was Kolby Listenbee, and it was quite a spread: 24 catches. Listenbee caught 41 passes for 753 yards and four scores. Doctson is crucial to the TCU passing game; the chemistry he has with Boykin is impressive.

James McFarland, DE – Losing Paul Dawson and Kevin White, the TCU defense is in need of a leader this season. This is a role McFarland should be able to fit right into. Last season, McFarland registered seven sacks and 12 tackles for loss. He was a major part of a squad that averaged 3.1 sacks per game, which was good for 11th in the FBS.

5. The Horned Frogs will be favored in every game this season going into the playoff.

While looking at the schedule, combined with what I forecast as another average season for the middle tier of the Big 12, TCU will be favored in every single regular season game. The only threat is the season finale against Baylor, but it is at home, so the odds are certainly in the Horned Frogs’ favor.

4. TCU will not lose during the regular season.

With the aforementioned conference schedule, and the only tough non-conference game being at Minnesota, it is not really going on a ledge to say that TCU will not fall in the regular season. The Frogs are experienced, and it will be a tough task for anyone to even hang with them, let alone beat them. The toughest games for TCU will be the road games at Oklahoma and at Oklahoma State.

3. TCU will beat Baylor by at least two touchdowns and advance to the playoff.

With revenge on their mind and playing at home, TCU will be certain to not let a lead slip away against Baylor again this season. Gary Patterson will make sure of it, and the Horned Frogs will cruise into the playoff, as one of the top two seeds. Additionally, Boykin will deliver a huge performance leading to the next prediction:

2. Trevone Boykin will win the Heisman.

Boykin was huge last season for TCU as a dual-threat quarterback. With the amount of weapons the offense possesses, Boykin’s numbers will improve even more this season. While it is hard to top over 325 passing yards per game and 37 touchdowns through the air, Boykin will do it and strike the pose in December.

1. TCU will play for the national title.

Going in with some momentum, TCU will defeat its semifinal opponent in the playoff and battle Ohio State for the national championship. The Buckeyes were the squad that took the final spot in the playoff last season — away from TCU, it could be argued — and in 2015, the two will square off for everything. It will be a battle of strengths and a fun game to watch for anyone.