1 Burning Question: How do the Cardinals replace all that NFL talent?

With the exception of only ACC foe Florida State, no team had more players selected in the 2015 NFL Draft than Louisville. The Cardinals will not have to replace only wide receiver De’Vante Parker, who went 14th overall to the Miami Dolphins, but six defensive starters who went pro including the nation’s interception leader, Gerod Holliman. TCU transfer Devonte Fields will help make up for some of that.

Second-year head coach Bobby Petrino has notched a pair of top 40 recruiting classes and has a history of doing more with less, but the Cardinals will be a very young team in 2015. Will Gardner returns at quarterback, but is expected to battle Reggie Bonnafon for the starting job. Whoever wins that job will have talented playmakers James Quick and Brandon Radcliff at his disposal. The Cardinals are young, but with two of the first three games coming against Auburn and Clemson, Louisville will need to grow up in a hurry.

0 — That’s how many teams Louisville defeated last season that either were ranked at the time or finished ranked. The schedule doesn’t look to be much more daunting this season as Auburn replaces Notre Dame as the Cardinals’ top non-conference foe. If Louisville is to take the next step and win the ACC as it did the Big East in 2006 and 2012, the Cardinals will need to knock off either or both Clemson or Florida State. Each of those teams could be ranked in the top 10 when they face the Cardinals.

26 — 26 is the number of interceptions the Cardinals had last season which was tied for the FBS lead with Louisiana Tech and TCU. The problem for Louisville is 14 of them were cradled by one man, Gerod Holliman, who is now in the NFL. With Louisville having to face quarterbacks like Greg Ward Jr., Jacoby Brissett, Deshaun Watson and Everett Golson all by mid-October, the Cardinals will need to find a way to replace Holliman’s presence.

Why it matters: With a first half schedule that includes Clemson as well as road trips to Raleigh and Tallahassee, starting the season on the right foot will be key for the Cardinals. Like Louisville, Auburn is replacing key players and coming off a season that could have been much better than it was. It was more than a decade ago that the Tigers were trying to lure Bobby Petrino away from Louisville and this could serve as a chance to show them have they could have had.

Why it matters: Clemson was picked by the media to be the class of the ACC and with this game being on a Thursday night at Papa John’s Cardinal Stadium, Louisville will have an opportunity to make a huge statement and throw its hat into the ring as a legitimate ACC contender. The Cardinals nearly shook up the country on a Thursday night last season against eventual ACC champion Florida State, but let an early 21-0 lead slip away. If Louisville can shock the Tigers, it could serve as a breakthrough victory in the second stint of the Bobby Petrino era.

Why it matters: It’s tough to say where each team will be when they meet in Raleigh on October 3rd. Louisville could be anywhere from 1-3 to 4-0 when this match-up takes place and it will be important for the Cardinals to get this victory heading into a bye week. N.C. State appears to be loaded offensively with Jacoby Brissett, Shadrach Thornton and Bo Hines and slowing it down will be key for Louisville. This winner of this game could also become a darkhorse to win the ACC Atlantic. 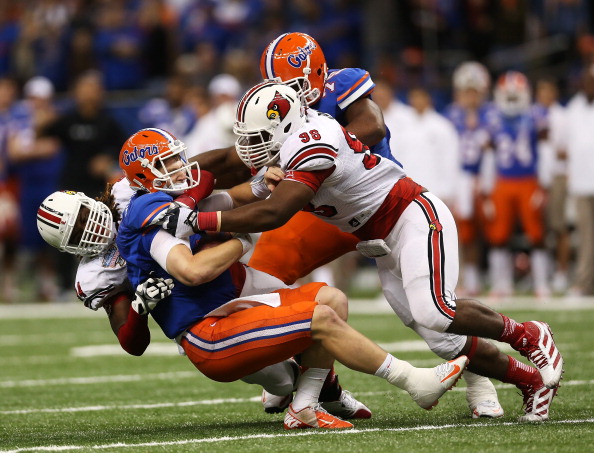 NEW ORLEANS, LA – JANUARY 02: Jeff Driskel #6 of the Florida Gators is sacked by Sheldon Rankins #98 and Lorenzo Mauldin #94 of the Louisville Cardinals in the fourth quarter of the Allstate Sugar Bowl at Mercedes-Benz Superdome on January 2, 2013 in New Orleans, Louisiana. (Photo by Matthew Stockman/Getty Images)

Brandon Radcliff, RB — Louisville was one of the nation’s worst teams a season when it came to yards-per-rush, but Brandon Radcliff was not the reason. Radcliff is a powerful runner at 5’9” and 215 pounds and averaged better than 5 yards-per-carry and rushed for 12 touchdowns. Despite splitting time with the more veteran Michael Dyer, Radcliff broke the 100-yard barrier three times in 2014.The biggest question for the Louisville ground game will be how the offensive line holds up after losing two starters to the NFL Draft.

James Quick, WR — With De’Vante Parker now playing in the NFL, junior James Quick will be expected to be the go-to playmaker in the Louisville offense. With uncertainty at quarterback, Quick will need a big season for the Cardinals to be successful offensively. Quick finished second on the team last season with over 600 yards receiving and he averaged nearly 16 yards-per-catch.

Sheldon Rankins, DE — The leading sack man from 2014, senior Sheldon Rankins is an imposing figure at 6’2” and more than 300 pounds. Rankins did just about everything for Louisville last season finishing with a team-high 8 sacks and 13.5 tackles for loss in addition to recording a pair of interceptions and ranking fourth on the team with 53 total tackles. With a younger defense, Rankins will need to have a similar season for the Cardinals to repeat last season’s success.

Keith Kelsey, LB –Louisville’s leading returning tackler, Keith Kelsey is a force to be reckoned with at the linebacker position. Kelsey has a nose for the football and finished with 87 total tackles a season ago which included 6 sacks. At 6’1” and 235 pounds, Kelsey has the size to play inside and the speed to play outside and should make a major impact as a junior in 2015. Playing alongside Devonte Fields is only going to help Kelsey.

5. Louisville will start 0-3 in ACC play.
If Louisville has any chance of competing in the ACC, it will need to play well early. The Cardinals will open ACC play at home against Clemson on Sept. 17 before playing back-to-back games in October against North Carolina State and Florida State. Expect all three games to be competitive, but with a young team and uncertainty at quarterback, Louisville will drop all three.

4. Reggie Bonnafon will eventually secure the starting quarterback spot.
He may not be the typical Bobby Petrino quarterback, but with an offensive line that loses key starters and the team’s best receiver from last year playing in the NFL, Reggie Bonnafon’s versatility will eventually earn him the starting quarterback job. Bonnafon is much more athletic than Will Gardner and being a dual-threat will make him the better option for Louisville this season. Bonnafon completed just 51 percent of his passes on 120 attempts last season, but should improve with more reps in camp.

3. Sheldon Rankins and Devonte Fields will combine for 25 sacks.
Louisville has a number of very big question marks heading into 2015, but generating a pass-rush shouldn’t be one of them. Sacks leader Sheldon Rankins should easily hit the 10-sack mark and TCU transfer Devonte Fields will be one of the ACC’s best players at the outside linebacker position. It’s possible that a healthy Fields could lead the ACC in sacks and the two players should easily get to 20 sacks, but averaging 12.5 is far from unrealistic.

2. Brandon Radcliff will rush for 1,000 yards.
As the feature back in Louisville’s offense, Brandon Radcliff will have a breakout year as a junior. At 215 pounds, Radcliff is more than built to carry the offensive load. Helping Radcliff’s case is the fact the Cardinals have limited proven weapons at wide receiver and questions at quarterback. The offense as a whole likely won’t be stellar, but that doesn’t mean Radcliff cannot be.

1. Louisville will lose five games.
Louisville will again be a good team in 2015, but the Cardinals’ talent won’t be reflected in their record. Louisville will struggle to gel early on and will start 2-4 with losses to Auburn, Clemson, N.C. State and Florida State. The Cardinals will hit their stride in the second half of the year, but drop one of their final two games to either a Pittsburgh team that should be much improved or a Kentucky team that continues to get better under head coach Mark Stoops.