After suffering through consecutive 5-7 campaigns, Utah finally had its breakthrough season in the Pac-12, finishing 9-4 overall, with an impressive 5-4 mark in conference play.

There are certainly plenty of reasons for optimism. The Ute defense welcomes back seven starters from last year’s squad, which led the nation in sacks (55) and finished 10th in tackles for a loss (103). While the defense has to replace Nate Orchard, standouts Hunter Dimick (10 sacks, 14.5 TFL) and Jason Fanaika (5 sacks, 9.5 TFL) return, giving Utah a formidable pass rush on the outside. The linebacking corps will be one the of the deepest in the country, featuring Jared Norris (116 tackles, 13 TFL), Jason Whittingham (81 tackles in 2013) and Gionni Paul, who finished fourth on the team in tackles despite missing four games due to injury.

In addition to all of the talent coming back, Utah made one of the best hires of the offseason by luring 40-year coaching veteran John Pease out of retirement. While he’s had success at both the college and professional levels, Pease’s track record in the realm of player development speaks for itself. In his two seasons at the Utes’ defensive line coach, he molded Koa Misi and Sealver Siliga into NFL starters. Prior to that, his last college coaching job was with the Washington Huskies from 1977-1982, when every senior starter during Pease’s tenure went on to play in the NFL.

On the other side of the ball, the Utes are also in great shape. All-Pac-12 running back Devontae Booker returns this fall, after finishing second in the league in rushing with 116.31 yards per game. He’ll run behind a veteran line that welcomes back four starters, including center Siaosi Aiona, who earned a spot on the 2015 Rimington Award Watch List. Furthermore, unlike previous seasons, Utah has plenty of depth at quarterback with Travis Wilson and Kendal Thompson, who each showed flashes of brilliance on the gridiron last year.

103 – This is the number of tackles for a loss that Utah recorded last year. The Ute defense was so successful last season because it made so many plays behind the line of scrimmage. Whether it was a tackle for a loss to put its opponent behind the sticks or a sack on third down to force a punt, Utah’s defense delivered. While Utah’s D likely won’t match last year’s numbers, it needs to make sure there’s not a huge drop-off.

3 – This is the number of times that the Utes threw for more than 300 yards … also the number of times it threw for 100 yards or fewer. If Utah is going to compete for the Pac-12 championship every season, it must become more consistent offensively, especially in the passing game. While the U did manage to win two of three contests in which it failed to throw for more than 100 yards, that’s not going to work on a yearly basis. It’ll be interesting to see what offensive coordinators Jim Harding and Aaron Roderick will bring to the passing game this fall.

Why it matters: While every conference game is important — especially in a league as deep as the Pac-12 — this one means something more because its a rivalry. Sure, it’s not the same as playing in the “Holy War” against BYU, but this contest is quickly becoming one of college football’s hottest new rivalries, with the last four meetings being decided by a touchdown or less.

Why it matters: The result of this game will set the tone for the rest of the season. Although a loss wouldn’t necessarily derail the 2015 campaign, a win over the Ducks in Autzen Stadium would send a message to the entire league that the Utes are a contender.

Why it matters: UCLA returns 18 starters from last year’s 10-3 squad, including five players who earned first or second team all-conference honors. This type of talent will have the Bruins in contention again this season, potentially turning this matchup a de facto South Division championship game. 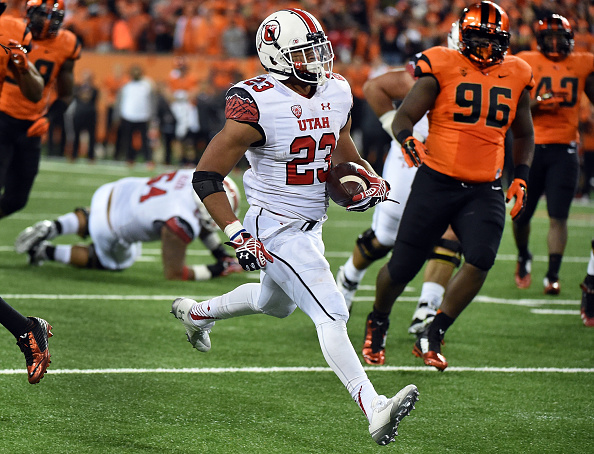 Devontae Booker, RB – A legitimate candidate for Pac-12 Player of the Year this fall, Booker is Utah’s top offensive weapon. Whether as a rusher (116.31 yards per game) or as a pass receiver (42 receptions), Booker kept the chains moving all season long. Expect Roderick and Harding to get the ball in his hands as often as possible.

Hunter Dimick, DE – One of the most underrated defensive linemen in the country, Dimick put together a fine season in 2014. He disrupted opposing offenses all year long, recording 10 sacks and 14 tackles for loss. He also forced two fumbles and broke up two passes. Don’t be surprised if he matches or exceeds last season’s production, even with the loss of Orchard.

Gionni Paul, LB – Paul is the most dynamic playmaker on a defense that’s loaded with talent. Despite missing four games due to injury, Paul led the team with four interceptions and averaged 6.78 tackles per game. If he remains healthy, he’ll earn All-Pac-12 honors this fall.

Kenneth Scott, WR – Scott led the team in receiving last year, catching 49 passes for 501 yards. He’ll be an important part of the offense again this season, as the Utes will use him to stretch the field to prevent opposing defenses from loading the box to stop Booker.

Many people will disagree with this prediction because the Utes have had seven different offensive coordinators since 2009. However, the offense shouldn’t change this much this fall under the leadership of Aaron Roderick and Jim Harding. After all, Harding ran this same scheme under former coordinator Dave Christensen at Wyoming, while Roderick knows what head coach Kyle Whittingham expects by virtue of his 10 years on the coaching staff.

Adding these two factors together, the offense will have the most continuity it’s had since Andy Ludwig departed after the 2009 Sugar Bowl. Without the need to learn a new scheme, the Ute offense should pick up right where it left off in the Las Vegas Bowl.

While I mentioned earlier that Gionni Paul would earn all-conference honors if healthy, he’s not the only Utah linebacker that will do so. One of the top defenders in the league, Norris finished fourth in the Pac-12 in tackles and eleventh in tackles for a loss. He’ll again serve as the anchor for a stingy Ute defense that allowed just 1.9 yards per carry in non-conference play last year.

3. The defense will finish in the top 10 nationally in sacks.

Despite the loss of Orchard, the Utes will rank among the nation’s leaders in sacks again this year. As noted above, Pease is one of the best in the business at developing defensive linemen, having sent a number of players to the NFL, including former Ute standouts Koa Misi and Sealver Siliga. There’s no reason to think he won’t enjoy similar success with a talented line that includes Dimick, Jason Fanaika, and Lowell Lotulelei.

The Utes have plenty of experience on both sides of the ball. That’s a sharp contrast from the Ducks, who have to replace QB Marcus Mariota, as well as three starters in the secondary. The extra bit of seasoning will give Utah the advantage in the conference opener. Go ahead and mark it down as an upset special.

Behind one of the nation’s top pass rushes, a much improved offense, and best kicking game in the country, the Utes will nine games and compete for the Pac-12 South title.