1 Burning Question: Can Texas Make a Significant Leap in Year No. 2 Under Strong

After an 8-5 finish in 2013 was enough to end the career of Mack Brown, the Longhorns took a step back in 2014, going just 6-7 under first-year head coach Charlie Strong. It marked Texas’ second losing season in five years.

When Strong came over from Louisville following a Sugar Bowl victory over Florida, expectations were that Strong would have Texas winning 10 games again on an annual basis. Under Strong, the Longhorns were expected to be playing for not only Big XII titles on a regular basis, but to be in the mix for the occasional national championship.

Strong recently put together the best recruiting class in the Big XII, but fans in Austin are going to expect results on the field. The schedule isn’t easy as the Longhorns’ non-conference slate includes a trip to Notre Dame, California and a Rice squad that won eight games last season. If Texas doesn’t make major strides in 2015, Strong’s seat could get very hot.

2 Keys Stats to Pay Attention To

108 — That’s where Texas ranked a season ago when it came to scoring as the Longhorns averaged just 21.4 points-per-game. On the offensive side of the ball, Texas did nothing well. The Longhorns failed to rank in the top 100 in rushing and they averaged less than 200 yards-per-game throwing the football. Running back Johnathan Gray returns and will run behind an offensive line that should be improved, but the Longhorns still have huge questions at the quarterback position with Tyrone Swoopes again expected to be the starter. The Big XII is known for its offensive prowess with the nation’s top two scoring teams from a season ago and unless Texas can improve dramatically, it is in for another lackluster season.

1-5 — In six contests against top-25 teams a season ago, Texas managed just one victory and that came at home against West Virginia. In the five losses, Texas’ average margin of defeat was 19 points. This season, Big XII foes Baylor, TCU and Oklahoma are all expected to be in the top 20 along with Texas’ season-opening opponent, Notre Dame. The Bears and Horned Frogs could both begin the year in the top 5 and if Texas is to make significant strides in 2015, it will need to play better against elite competition.

Why it matters: After finishing just 7-6 last season, Oklahoma State has felt a recent drop-off similar to Texas. The Longhorns will host the Cowboys this year in their Big XII opener and this will be a crucial game in getting Texas off on the right foot in conference play. It will also begin an important four-game stretch that includes contests with TCU, Oklahoma and Kansas State.

Why it matters: Like Texas, Oklahoma is hoping for a bounce-back season as well and of late, the Sooners have gotten the better of the Longhorns. This contest is particularly important for Charlie Strong as coaches at Texas will forever be judged on how they perform against Oklahoma. Getting the better of the Sooners in the Red River Rivalry would serve as a nice stepping stone as Texas hopes to return to national prominence.

Why it matters: In recent years, the Longhorns have not only become an afterthought in the Big XII and national championship race, but in the state of Texas as well. Meanwhile in the last four years, Baylor has produced a Heisman Trophy winning quarterback while appearing in consecutive major bowls. The Bears have taken the last two contests over Texas by a combined 58-17 margin. If the Longhorns are to be a player on the national scene, they’ll first need to be a player in Texas and that means being competitive with Baylor. 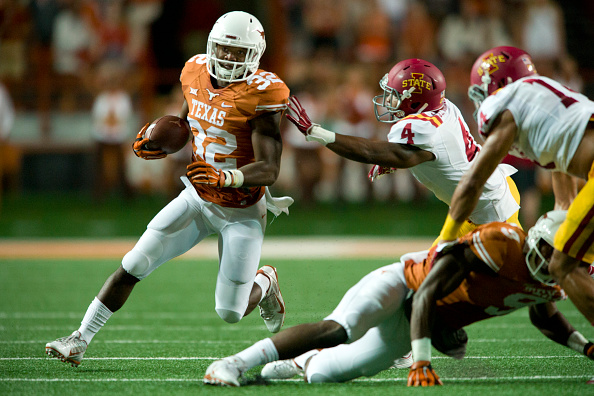 Johnathan Gray, RB — The senior running back had a woeful end to 2014, finishing with 9 total yards on 17 carries over his final two games, but Gray’s lack of production was due largely to a porous offensive line and poor play at the quarterback position. Still, Gray had a better season than his now NFL teammate Malcolm Brown averaging more yards-per-carry and leading the team with 7 rushing touchdowns. At 5’11” and 205 pounds, Gray can run behind the tackles and away from defenders. He’ll still be at the mercy of his offensive line and a shaky quarterback situation, but for the Longhorns, Gray will need a big season.

Sedrick Flowers, G — At 6’3” and 320 pounds, Sedrick Flowers is the most experienced member of an offensive line that was woeful a season ago. Flowers had an outstanding spring and many believe he has the potential to be first-team All-Big XII as a senior in 2015. If the Longhorns are to improve offensively this season, it will need to begin up front and that means Flowers will need a big year.

Hassan Ridgeway, DT — For the Texas defense, there is no more imposing figure that junior defensive tackle Hassan Ridgeway. As a sophomore last season, Ridgeway ranked second on the team with 6 sacks and was fourth with 11 tackles for loss. With so many question marks on offense for Texas and so many proficient offenses in the Big XII, the Longhorns will need to be stout on the defensive side of the ball and Ridgeway’s ability to stuff the run and get to the quarterback makes him invaluable.

Duke Thomas, CB — With 3 interceptions in each of the last two seasons, Duke Thomas will headline the Texas secondary. Thomas will need to be up to the challenge as Texas faces five of the nation’s top 10 passing teams from a season ago. At 5’11”, Thomas has good enough size to cover big receivers and excellent closing speed.

Junior Tyrone Swoopes will likely remain the Texas starter early on in 2015, but don’t be surprised if Jerrod Heard, a redshirt freshman, eventually overtakes him. Swoopes had his struggles as a passer last season which is an area that Heard looks to have more potential. If the Longhorns struggle early in Big XII play, don’t be surprised if head coach Charlie Strong makes the switch.

Without Malcolm Brown there to split carries, Johnathan Gray will enjoy a career-year as a senior. Gray will be asked to carry the offense in 2015 and will do excel in doing so. Expect a suspect offensive line to be much improved and Gray will be the biggest beneficiary.

3. Texas will go undefeated in Austin.

It won’t be easy, but the home slate is set up for Texas to run it. The toughest contests in Austin look to be against Kansas State and an Oklahoma State team the Longhorns defeated last year. Texas will also play Rice, California and Texas Tech at home. The contest with Oklahoma as always, will be played in Dallas.

2. Nick Rose will be an important player.

During its 6-7 campaign a season ago, Texas played in very few close games, but the Longhorns will be better this season. With a better team in a very competitive Big XII conference, Texas is bound to play more close games which means kicker Nick Rose will have a bigger role and will be in more clutch situations. Rose was 14-for-21 last season on field goals with a long of 51 yards.

It may or may not be enough to get Charlie Strong off the hot seat, but Texas will enjoy at least eight victories in 2015. In addition to running the home slate, the Longhorns will beat Iowa State and West Virginia. Should the Longhorns fail to win any one of those games, Texas can still hit eight wins by pulling an upset or winning a bowl game.