After winning the ACC in 12 of its first 15 years in the conference, Florida State went six years without an ACC crown from 2006-2011. Since then however, the Seminoles have reclaimed the ACC, winning it in three straight seasons while compiling a FBS-best 39-3 mark over that span, which includes the 2013 national championship.

Expectations are much lower heading into 2015, so much so that FSU was not even picked by the media to win the ACC. The Seminoles have won 24 straight games against ACC opponents, but for FSU to take the conference for a fourth straight year, it will take head coach Jimbo Fisher’s best coaching effort. The Seminoles are still talented, but are young and very thin in some areas. It doesn’t help matters that Florida State’s toughest games all seem to come away from Doak Campbell Stadium. The Seminoles lose a lot, but will be helped by the transfer of quarterback Everett Golson and one of the nation’s top incoming recruiting classes.

17 — For a program that has produced greats like Andre Wadsworth, Reinard Wilson, Jamal Reynolds and Bjoern Werner, generating a pass-rush was a big problem for FSU last season as the Seminoles totaled just 17 sacks. That ranked just 108th nationally. Florida State doesn’t return a single defensive lineman who totaled more than one sack a season ago, but DeMarcus Walker, Chris Casher, Rick Leonard and Lorenzo Featherston could all be in for career years. The Seminoles will face talented returning quarterbacks like Deshaun Watson, Jacoby Brissett and Brad Kaaya and being able to get pressure will be key this season.

1 — That’s the number of starters on offense Florida State returns from last season’s opener against Oklahoma State. The lone returning starter from that group is fullback Freddie Stevenson. While there will be no shortage of talent this season for FSU, the Seminoles are replacing a Heisman Trophy-winning quarterback in Jameis Winston, a Mackey Award-winning tight end in Nick O’Leary, the school’s all-time leading receiver in Rashad Greene, and all five offensive linemen who started last season’s opener. The Seminoles are hoping Notre Dame transfer Everett Golson can serve as a competent replacement for Winston, and that a fresh offensive line can provide protection and open up holes for the ground game. To make matters worse, leading returning rusher Dalvin Cook is indefinitely suspended and facing dismissal after being accused of punching a woman outside a bar. Cook is in court this week. It’s safe to say at this point that FSU has more questions than answers.

Why it matters: Florida State has certainly had the upper hand on Boston College, winning five straight, but the Eagles have been Florida State’s toughest opponent in the regular season in each of the last two years. Roberto Aguayo had to knock home a short field goal in the waning seconds last season for FSU to get the victory in Tallahassee. This year’s contest will force the Seminoles to take a long trip on a short week to open ACC play. Beginning the year on the right foot in ACC action is essential if the Seminoles are going to again win the conference.

Why it matters: In a year that had no shortage of drama, Florida State’s most thrilling victory may have been a 23-17 contest against Clemson in which the Seminoles were without starting quarterback Jameis Winston. Since 2009, the winner of the annual FSU-Clemson game has gone on to represent the Atlantic division in the ACC title game every year. Florida State pounded the Tigers, 51-14, in its last trip to Death Valley, but the media picked Clemson to unseat the Seminoles in the ACC this season. This contest has served as a de facto ACC semifinal the last several years, and this one should not be much different.

Why it matters: Winning the state of Florida has almost always led to bigger championships. This year, Florida State’s most bitter rival will have a new head coach in Jim McElwain. FSU’s Jimbo Fisher got the better of Urban Meyer in 2010 before going 3-1 against his former colleague at LSU, Will Muschamp. While FSU certainly has goals of winning bigger championships, holding on to the state championship will be vital for the Seminoles in what many expect to be a down-year in Tallahassee. 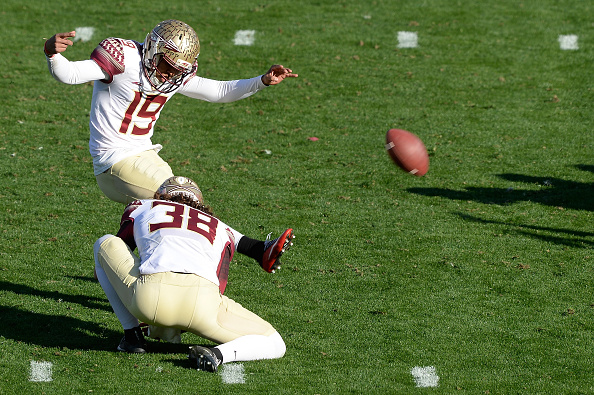 PASADENA, CA – JANUARY 01: Place kicker Roberto Aguayo #19 of the Florida State Seminoles kicks a field goal in the first quarter against the Oregon Ducks during the College Football Playoff Semifinal at the Rose Bowl Game presented by Northwestern Mutual at the Rose Bowl on January 1, 2015 in Pasadena, California. (Photo by Kevork Djansezian/Getty Images)

Everett Golson, QB — Everett Golson has yet to be named the starting quarterback, but as the most experienced signal-caller on the roster, conventional wisdom seems to suggest he will. Though Golson had an up-and-down career at Notre Dame, he’s no stranger to the national spotlight. When the pressure is on, Golson seems to come through more often than not. Golson has over 4,800 career passing yards and 55 total touchdowns. He helped the Fighting Irish reach the BCS title game in 2012. Golson is a good athlete and could provide leadership to a young team that has big dreams in the years to come.

Dalvin Cook, RB — In 2014, Dalvin Cook became the first FSU freshman ever to rush for 1,000 yards in a season. Though his year ended in disappointment with a pair of turnovers against Oregon and his offseason involved battery allegations, Cook will be the most vital player to the offense this season if he’s allowed to play. Cook is a blazer out of the backfield, catches the ball well, and is deceptively strong. With the majority of the passing game from last season gone, FSU will rely on the ground attack more this season. Cook will be at the forefront of that approach.

Jalen Ramsey, CB — Junior Jalen Ramsey has played just about everywhere in the Florida State secondary, but will move back to cornerback this season. Known for his intensity and versatility, Ramsey did almost everything for the Seminoles’ defense a season ago, ranking in the top three on the squad in tackles for loss, interceptions, sacks, and forced fumbles. A preseason All-American, Ramsey has emerged as a leader for a young FSU defense that underwhelmed a season ago. Ramsey is also one of only two defensive starters remaining from the 2013 national championship team that yielded the fewest points-per-game in the country.

Roberto Aguayo, K — Rarely do kickers get mentioned as notable players for top-10 teams, but Roberto Aguayo is that special. The 2013 Lou Groza Award winner and a 2014 Consensus All-American, Aguayo is 48-for-52 on field goal attempts in his career and has never missed from a distance shorter than 40 yards. Aguayo has a huge leg, and with an offense that has so many question marks, Aguayo will be a real weapon for the Seminoles. Aguayo may not only be the best kicker ever at a program that had three different All-American kickers in the 13 years prior to his arrival, but perhaps one of the best in the history of college football.

5. Florida State will again be the best team in Florida.

The Seminoles beat the Gators and Hurricanes last season by a combined nine points, but even with all the new faces for FSU, the Seminoles remain the best team in the state. Miami is 0-5 against FSU head coach Jimbo Fisher and will have to travel to Tallahassee, while Florida is working with a makeshift offensive line and real questions at quarterback.

Though this may not seem like that bold a prediction since Roberto Aguayo is the preseason favorite, the junior will join another former Seminole in Sebastian Janikowski as the only two-time winner of the Lou Groza Award. Aguayo has been close to automatic throughout his career, and many felt he should have won the award last season.

17 total sacks in an unacceptable number for a team that led the nation in that category in 2012. The Seminoles’ defensive front may not be full of All-Americans, but it is deep and will be much better as a unit in 2015. DeMarcus Walker will headline the contingent after a stellar spring, but a number of guys will contribute, and that could include 5-star freshman Josh Sweat.

2. Freshmen will make a huge impact.

With a young team, freshmen will make a major impact for Florida State in 2015. The Seminoles are extremely young, but the incoming talent is just too good not to play early. That includes highly-touted prospects like safety Derwin James, defensive end Josh Sweat, cornerback Tarvarus McFadden, wide receiver George Campbell and running back Jacques Patrick. The newcomers will make such an impact that Florida State will be among the favorites to win the national championship in 2016.

Even in what many feel will be a down-year for the Seminoles, FSU will still manage to win 10 games. Boston College, Miami, Georgia Tech, Louisville, Clemson, N.C. State and Florida are all good enough to hang with the Seminoles this year, but Florida State should still be able to go 5-2 in those games. Even if FSU goes 4-3, it can still reach the 10-victory plateau by winning a bowl game. The Seminoles are 4-1 in bowl games under Jimbo Fisher.