Baylor is quietly emerging as one of the top programs in college football. With very little fanfare, the Bears have captured the last two Big 12 championships, finishing 7th in the final Coaches Poll last year.

This begs the question: “Will Art Briles’ squad make it three in a row this season?”

There are plenty of reasons to think so. Sure, Bryce Petty is off to the NFL, but that doesn’t mean that the Bears won’t get solid production out of the quarterback position this season. Briles has done an excellent job replacing next-level signal callers in the past. In 2012, Nick Florence replaced Robert Griffin III, and actually threw for more yards per game. The following year, Petty replaced Florence and had a stellar season, throwing for 4,200 yards with an impressive 32-3 TD-to-INT ratio. With a track record like that, there’s no reason to think Seth Russell couldn’t follow suit, especially with Corey Coleman (64 catches, 1,119 yards) and KD Cannon (58 catches, 1,030 yards) returning at receiver.

The running game is also in excellent shape. The offensive line welcomes back six players (95 career starts) with starting experience, including consensus All-American Spencer Drango. They’ll have no trouble opening up huge holes for Shock Linwood (1,252 yards), who ran for 5.09 yards per carry against ranked opponents last season.

On the other side of the ball, the Bears are equally solid. Shawn Oakman (19.5 TFL, 11 sacks), Andrew Billings (11.5 TFL, 2 sacks ), K.J. Smith (9.5 TFL, 5 sacks), and Beau Blackshear (9.5 TFL, 4.5 sacks) all return this fall, giving Baylor a dominant front four that often makes plays behind the line of scrimmage. In the secondary, Xavien Howard (4 INT, 13 passes broken up), Orion Stewart (4 INT, 3 passes broken up), and Ryan Reid (12 passes broken up) return to anchor a solid unit that finished third in the Big 12 in passes defensed.

3.15 – The average yards per carry that Baylor’s front seven allowed last season, the seventh best total in the country. The Bear defense was one of the most under-appreciated units in the country in 2014. Led by a defensive line that repeatedly made tackles in the other team’s backfield, Baylor ranked in the top 20 in tackles for a loss (18th), sacks (20th), and yards per carry (7th). Opposing offenses had very little luck running against the front seven, which allowed only 8 runs of 20 yards are more. If the Bears are going to threepeat as conference champions, they’ll need this trend to continue. With everyone except for MLB Bryce Hager returning, the odds look very good.

1.17 – The average yards per carry for the Bears in their two losses last season. The key to victory for Baylor last year was establishing the run. When the Bears ran for more than 2.5 yards per carry, they went 11-0; when they didn’t, they went 0-2. Given that Baylor hasn’t lost a game in the past two seasons when it averaged more than 4 yards per carry, it’s imperative that the team does a better job of running the ball in 2015.

Why it matters:  Oklahoma is one of the top teams in the Big 12. Sure, the Sooners are still trying to figure out who the starting quarterback will be, but the tailback tandem of Samaje Perine and Joe Mixon will take a lot of pressure off the passing game. OU will come into this game extra fired up after losing last year’s contest by 34 points.

Why it matters:  Back in 2013, Baylor looked like it was headed for an undefeated season before suffering a 49-17 loss the Cowboys. As the most improved team in the Big 12 this fall, Oklahoma State certainly has the talent to pull off the upset. However, the Bears should be able to trust their own abilities. They’ll want to win in Stillwater, something they couldn’t do two years ago.

Why it matters: The overwhelming favorite in the preseason Big 12 Media Poll, TCU returns nine starters from an explosive offense that ranked second nationally in scoring, fifth in total offense, and seventh in passing offense. With the conference championship — and a potential berth in the College Football Playoff — on the line, this is a “must win” game for Baylor. 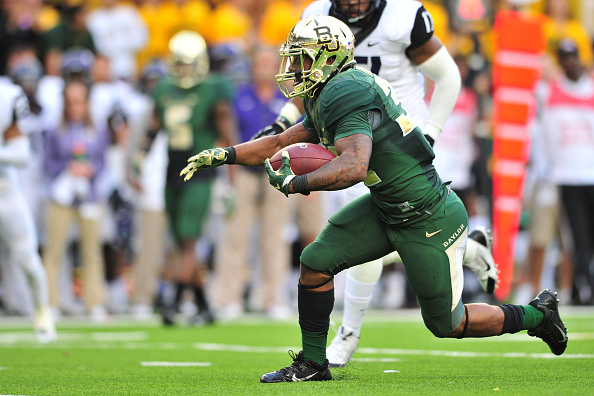 Shock Linwood, RB — An All-Big 12 performer last season, Linwood rushed for 1,252 yards and 16 TDs. He was especially dangerous in conference play, averaging 111 yards per game and 5.22 yards per carry. Running behind an experienced offensive line, he will post even bigger numbers this fall.

Corey Coleman, WR — Coleman is one of the top receivers in college football. In 10 games last year, he caught 64 passes for 1,119 yards (17.48 ypc) and 11 TDs. More impressively, he turned in some of his best outings of the season against top-5 competition, posting 144 yards against TCU and 150 against Michigan State. His ability to stretch the field will prevent opposing defenses from loading the box to stop Linwood.

Shawn Oakman, DE — At 6’9″ and 275 pounds, Oakman’s unique combination of size and speed will continue to cause all sorts of matchup problems for opposing offenses. He was the most disruptive defensive lineman in the conference last year, recording 19.5 TFL and 11 sacks. He’ll team up with Beau Blackshear, Andrew Billings, and K.J. Smith to form the best defensive line in the country.

As noted earlier in the preview, Oakman has a unique combination of size and speed which makes it difficult for opposing offenses to block him. However, it’s also important to note that he’s continued to improve over the past few seasons, especially as a pass rusher, recording 11 sacks last year after posting just two in 2013. At the rate he’s progressing, there’s no reason to think that he won’t be the top defensive lineman in the country this season.

After losing Bryce Petty, many experts think that the offense will take a step back this year. It won’t. Russell played well when he got the opportunity last season, passing for 804 yards with an 8-1 TD-to-INT ratio and an impressive 9.5 yards per carry. Since he’s also an excellent runner (56 career rushes, 332 yards), he’ll give opposing defenses yet another dimension to worry about.

3. The running game will be the best in the conference.

With an experienced offensive line — which includes consensus All-American Spencer Drango — and the return of RB Shock Linwood, the Bear running game was already in good shape. This year, the Bears will add another key component in the form of 6’7″, 410-pound tight end LaQuan McGowan. His presence in the lineup will give the offense another powerful blocker at the point of attack. However, defenses have to respect his skills as a receiver as well.

To me, this isn’t exactly a bold prediction. After all, the Bears beat TCU last year, and have the more experienced team this year. Even though this season’s game will be played in Fort Worth, I still like Baylor’s chances to win.

1. The Bears will advance to the College Football Playoff.

Behind an explosive offense and a top-notch defense, Baylor will win the Big 12, and earn a spot in the College Football Playoff. Ironically, the Bears will face off against Ohio State — the very team that edged them out for the final spot last year.