1 Burning Question: Will Deshaun Watson stay healthy for more than a few minutes?

If you don’t watch men’s tennis (first off, you should… the U.S. Open’s coming up August 31 and will fill in the hours when college football’s not on), know this: Clemson quarterback Deshaun Watson just might be the Kei Nishikori of the FBS.

Immensely skilled, abundantly agile, and attentive to the geometry of the playing surface in front of him, Watson transforms Clemson. However, like Nishikori, his body is fragile and possesses an injury-magnet quality. Are football and tennis one and the same thing? Of course not. The larger point is that much as Nishikori can’t go two to three weeks without picking up some kind of nick or bruise or limp or hitch in his git-along, Watson’s 2014 season acquired a similar texture and trajectory. He has to find a way to limit the amount of contact he receives, making plays while also valuing his body. That’s not an easy thing to do in football, but as our Bart Doan eloquently wrote in a companion piece to this Clemson preview, Deshaun Watson’s life has never been a comfortable one.

4 – The number of consecutive seasons in which Clemson has registered a significant victory or achievement in the life of the program.

It is a point which cannot be repeated too often in the dying days of summer and this college football offseason: Clemson has ceased to be the program which squanders a chance to gain prosperity, which looks opportunity in the eye and flinches. (UCLA is now that program, more than any other.) This program doesn’t habitually steal defeat from the jaws of victory anymore. Clemson, to put it bluntly, has grown up. Dabo Swinney has coached this program well enough to change its reputation.

In 2011, the Tigers snapped a two-decade ACC title drought. In 2012, they beat LSU in the Peach Bowl.* ( * = Corporate sponsor name intentionally discarded.) In the 2013 season, they beat Georgia and then won the Orange Bowl over Urban Meyer and Ohio State. Last season, Clemson finally beat South Carolina, snapping a prolonged losing skid against the Gamecocks. The Tigers then crushed Oklahoma without Watson in the Russell Athletic Bowl.

Clemson is no longer the program which stumbles in the open field at the 30-yard line and falls to the ground, only to miss a 46-yard field goal three plays later and lose by two. This program achieves — it’s a refreshing twist for fans who caught frequent glimpses of insanity for a period of nearly 20 years.

It is true that Clemson gave Morris prime recruits to coach: Tajh Boyd, Sammy Watkins (aka, “Sammy,” the one-named Brazilian soccer star who didn’t need a last name), Andre Ellington, the list goes on. It could very well be that Clemson would have reached a higher plateau without Morris handling the Tigers’ offense.

However, what if Morris meant more to the program than many could have imagined?

That’s what we’re going to find out this season… provided Watson stays healthy, of course. (You didn’t think that was going to be the only time we’d refer to Watson’s health, didja? It won’t be the last time, either…)

Why it matters: A simple glance at Clemson’s schedule reveals a clear split between the breathers and the season-making games. The Tigers start and end with comparatively soft games, but from Sept. 17 through Nov. 7, the Tigers play five challenging games and two ACC contests that look manageable but could become tricky. The first game in this seven-game stretch is against Louisville, on the road, on a Thursday night. This contest precedes the team’s all-important bye week in late September. After the bye, Clemson hosts Notre Dame and Georgia Tech on consecutive weekends. A loss to Louisville would force the Tigers to thread the needle in the ACC from Oct. 3 through Nov. 7.

Why it matters:  Last year’s loss in Atlanta was the result of an injury to Watson. This year, Watson wants to get a shot at the Yellow Jackets. If he does, a victory becomes a realistic prospect. If Clemson can indeed take down the reigning Orange Bowl champions (the Tigers being the previous Orange Bowl winners), the odds of the next game on this list deciding the ACC Atlantic Division title will increase to a considerable extent:

Why it matters: This game requires no elaborate explanation in terms of its value. As long as Clemson and Florida State are separated by no more than one game in the division standings on the morning of Nov. 7, this tilt should decide the Atlantic.

Memo to the coaching staff: Do not run from the shotgun on fourth and short this time. (It was one of Chad Morris’s conspicuous flaws during an otherwise sterling stay in the Palmetto State.) 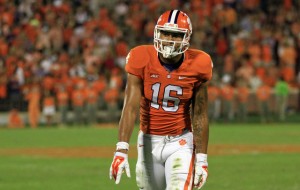 Jordan Leggett, TE – If a quarterback is going to stay healthy during a season, he needs that security-blanket type of pass catcher, the one who will be there in a hurry on third and five. Jordan Leggett needs to be for Watson what Jay Novacek was for Troy Aikman, and what Brent Jones was for Steve Young in the 1990s NFL.

Shaq Lawson, DE, and Mitch Hyatt, LT – Clemson’s best edge rusher and the young left tackle who is responsible for protecting Watson’s blind side have been going at it in camp. If Lawson — the mentor to Hyatt — gets his teammate sufficiently prepared for the season, the ACC Atlantic might be painted Orange instead of Garnet and Gold.

This might be more of a commentary on where Louisville is than anything else, but that’s part of sports — these are dialogues, not monologues. The condition of one’s opponent sometimes has more to say about the outcome than your own state of affairs. Louisville’s quarterback situation isn’t as settled as Clemson’s, and early in the season, Watson should be healthy (enough) to make the difference.

4. The Tigers will beat Georgia Tech.

You know Deshaun Watson circled this game in red ink right after that injury in Bobby Dodd Stadium a year ago. He will not be denied in this contest. The main source of concern for Clemson: Notre Dame could take a lot of starch out of the Tigers a week earlier. The injury report will be worth monitoring during Georgia Tech prep week.

Clemson’s visits to Raleigh have frequently been tricky propositions for the Tigers, but that piece of recent ACC history exists in tandem with the fact that Miami has not gained traction under Al Golden. Those two road games before the Florida State showdown aren’t part of the three most important games on Clemson’s 2015 slate, but that’s only because Louisville, Georgia Tech, and Florida State happen to be huge events. The Miami-N.C. State combination is quite significant in its own right. Expect the Tigers to pound Miami and go to the wire with the Wolfpack.

2. Clemson will lose to Florida State.

Upon extended thought — and a lot of internal back-and-forthing — Florida State seems like the better choice from one’s living room, in front of a keyboard, in August. The ultimate reason? Clemson would have liked this game early in the schedule rather than later. Watson would have stood a better chance of being physically fresh. Florida State’s Everett Golson might not have felt particularly comfortable in Jimbo Fisher’s offense. An early-season date would have suited Clemson as the home team in this game. The November spot on the calendar seems to help the Seminoles, who might be able to get Golson in the proper frame of mind.

1. Clemson will finish second to Florida State in the ACC Atlantic… but make a strong push for a New Year’s Six berth in a top-heavy ACC.

In college football, pick your losses wisely. Clemson could very well be an 11-1 or 10-2 team, but if the Tigers do lose to Florida State, they would need the Noles to drop two ACC contests in order to win the Atlantic and have a chance to play (probably Georgia Tech) for the league title. Florida State will probably lose at Georgia Tech, but if FSU beats Clemson, where will the second Seminole defeat come from? It’s hard to spot that second loss on the Florida State schedule, so Clemson will have to watch Florida State and Georgia Tech play for the ACC, hoping that it can get the second New Year’s Six berth after the winner of that game… and in front of the loser of that contest.

The SEC pushed three teams into the NY6 last season. The ACC has a legitimate chance of doing the same this year. Clemson will be a part of that dynamic.