1 Burning Question: Will the Tiger Defense Carry the Team to the SEC title?

Offense will never be a problem for a Gus Malzahn-coached team. As long as he’s calling the plays without anyone impeding him (see: 2011), his offense is going to move the ball up and down the field. That’s certainly been the case since he returned to Auburn in 2013, as the Tigers have averaged 493.44 yards per contest and 37.55 points per game.

On the other hand, the Tigers have struggled with consistency on defense the past two seasons. In 2013, Auburn ranked 87th nationally in total defense, allowing 420.7 yards per game. However, the Tiger D made the plays that it needed to, finishing 13th in the country in third down conversion defense and 10th in red zone defense.

The last two paragraphs beg the question: “Will things be different this year?”

Given Muschamp’s highly successful track record, it’s tough to envision the Tiger defense not improving this fall. After all, Auburn returns plenty of talent on that side of the ball. Jonathan Jones (6 INT, 18 passes defensed) and Johnathan Ford (93 tackles, 3 INT) are back to anchor a stout secondary that ranked 5th in the country in interceptions. The front seven remains virtually intact, welcoming back top playmakers Cassanova McKinzy (91 tackles, 11 TFL), Kris Frost (87 tackles, 10 TFL, 3 forced fumbles), DaVonte Lambert (7.0 TFL, 3.5 sacks), and Montravius Adams (8 TFL, 3 sacks). The pass rush will get a huge boost with the return of Carl Lawson (4 sacks in 2013), who missed last season due to injury.

5.5 – This was the number of yards per carry that Auburn allowed in five losses last year. The difference between winning and losing last year was run defense. When the Tigers could hold an opponent to fewer than 5 yards per carry, they won the ball game. On those occasions when it didn’t, AU posted a 1-5 mark, with the lone victory being a 45-21 win over Arkansas. If the Tigers are going to win the SEC this year, they have to play as well as they did in their wins last season, when they allowed only 3.21 yards per carry.

6.71 – The average number of yards the offense gained per play last year, the 10th-best total in the country. As is usually the case under Malzahn, the Auburn offense was one of the most explosive units in college football, averaging close to seven yards per play. The Tigers will need to match – if not exceed – this production to win the West this fall. History appears on Auburn’s side, as the team has ranked 20th or higher in four of Malzahn’s five years at the school.

Why it matters: Make no mistake about it: LSU has an excellent team, especially on defense. The Bayou Bengals return six starters from last year’s squad, which ranked ninth nationally in total defense, allowing just 316.8 yards per game. They’ll be extra hungry to win this year’s contest, since Auburn handed LSU its worst loss of the season last fall. If Malzahn’s squad is going to West, it must find a way to pull out a win in Baton Rouge, something it hasn’t done since 1999.

Why it matters:  Aside from “that team from Tuscaloosa,” Georgia is Auburn’s biggest rival. While the Tigers would still control their own destiny in the West with a loss, expect the team to come out fired up to win this contest. After all, the Dawgs demolished AU last year, 34-7, holding the Tigers to a season-low 292 yards.

Why it matters: The Iron Bowl is one of the top rivalries in college football. Whether both teams are competing for a crystal football or just fighting for bragging rights for the next 365 days, this is almost always one of the best games of the year. It certainly was from 2009-’13, when the winner of this contest went on to play for the national championship. Don’t be surprised if that happens again this year. 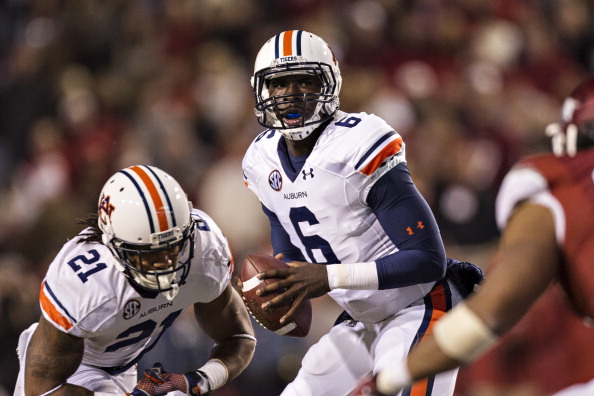 Jeremy Johnson, QB – After backing up Nick Marshall the past two seasons, Johnson will assume the starting role this fall. He’s played very well when he’s been in the lineup, completing 57 of 78 passes for 858 yards, with a very respectable 9-2 TD-to-INT ratio. An accurate (73%) passer with a strong arm (11 yards per attempt), Johnson brings a completely different dimension to the Tiger offense. Opposing defenses won’t be able to load the box to stop the stop Auburn’s vaunted ground game for fear that he’ll beat them with the deep ball.

D’haquille Williams, WR – A projected first round pick in the 2016 NFL Draft, Williams has a knack for coming up with great catches, highlighted by a couple of nifty one-handed catches against Louisiana Tech and LSU. He led the team in both receptions and TDs last season, and was especially effective against ranked opponents last year, averaging 6 catches for 102.5 yards in four games against top-25 competition. With Sammie Coates and Quan Bray departing, he’ll have an even bigger role in the offense this fall.

Jonathan Jones, CB – In his first full season as a starter, Jones was one of the top cornerbacks in the SEC. A second team all-conference performer last season, Jones tied for the league lead with 18 passes defensed, while finishing second in the SEC in interceptions, recording six picks. His cover skills are a perfect fit for Muschamp’s defense, which plays a lot of man-to-man coverage.

Carl Lawson, DE — The Auburn pass rush will get a huge boost this fall with the return of Carl Lawson, who missed last season with an injury. Lawson had an excellent freshman season in 2013, recording 4 sacks and 7.5 tackles for a loss. Judging by his performance in the team’s first scrimmage – in which Malzahn described him as “about unblockable” – he should pick up right where left off in 2015. Expect him to earn a spot on the all-conference team in December.

5. Auburn will finish in the top 20 in total offense.

This statement is certain to raise a few eyebrows. After all, the Tiger offense  loses Rimington Trophy winner Reese Dismukes, Chad Slade (49 career starts), 1,600-yard rusher Cameron Artis-Payne, and top receiver Sammie Coates. However, Malzahn is the top offensive mind in college football. Regardless of who he has on offense, his Tiger units will finish in the top 20 nationally in total offense — something he’s done in four of his five seasons at Auburn.

4. The Tiger defense will finish in the top 4 in the SEC in total defense.

As noted earlier in the preview, Muschamp has fielded top-10 units at Florida, Texas, Auburn, and LSU. While he may need another recruiting class or two before he fields another one here, this year’s Tiger D will be considerably better than it was last season thanks to Muschamp’s aggressive scheme, which will put more pressure on opposing quarterbacks.

3. Muschamp will be a Broyles Award Finalist.

While I’ve already written that Virginia Tech’s Bud Foster will ultimately win this coveted award — presented to the nation’s top assistant coach — I expect Muschamp’s name to be in the conversation because of the noticeable improvement of the Auburn defense. His candidacy will also get a huge boost because…

The Tigers nearly pulled off this feat last year, jumping out to a 33-21 lead before faltering in the second half. That won’t be the case this season. With Muschamp leading the defense and Malzahn focused on turning red zone opportunities — something Auburn struggled with in last year’s Iron Bowl — I like the Tigers’ chances to win this contest.

1. Auburn will the SEC and advance to the College Football Playoff.

Behind an electric offense and improved defense, the Tigers will win the SEC championship and advance to the College Football Playoff. They’ll play the Ohio State – Baylor winner in the national championship game.