The first half of the college football season is over and the final stretch of 2015 is nearing, which means it’s time to determine the 10 most important games left. A number of teams are trying to make their case for a spot in the second College Football Playoff. With 14 undefeated teams remaining, the playoff picture remains a bit murky, but that’s sure to change over the next several weeks.

Memphis and Houston have certainly done their part to bring exposure to a conference once known as the Big East. Houston’s signature victory came at Louisville while Memphis recently dominated an Ole Miss team that went into Tuscaloosa and defeated Alabama. This cat-fight between the Tigers and Cougars will likely not only decide the American Athletic Conference’s West division, but perhaps a New Year’s Six bowl berth and maybe even a playoff spot.

Arizona is the last remaining team on Utah’s schedule with fewer than three losses. The Wildcats have had a history of being giant killers after defeating Oregon in each of the last two seasons. Arizona has also won three straight against the Utes.

Florida has been one of college football’s biggest surprises this year, while archrival Florida State just continues to find a way to win. FSU has the best record in college football since 2012, but Florida should be favored in every game leading up to this contest. This one has the potential to possess major national title implications, just as it did throughout the 1990s.

TCU has been living on the edge this season, while Oklahoma State has nearly equaled its win total from a season ago. Despite a 6-0 start, the Cowboys have managed to fly under the radar for much of the season, but a win over the Horned Frogs could change that. The Cowboys could be TCU’s biggest challenge before the regular season finale against Baylor. 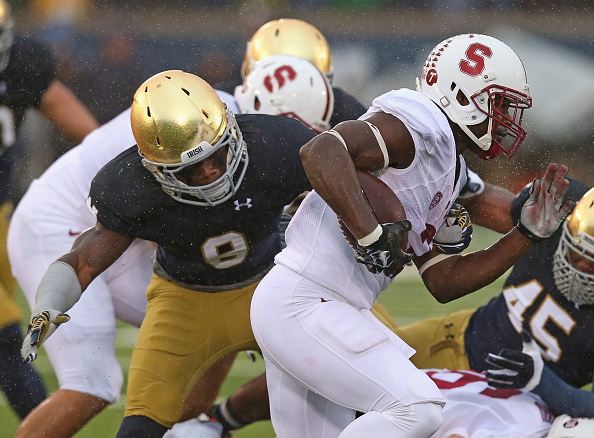 Stanford and Notre Dame are currently the two highest-ranked 1-loss teams aside from Alabama. If the Cardinal and Fighting Irish continue to win and the teams in front of them in the polls continue to lose, there is a chance this game could serve as something of a de facto national quarterfinal. Notre Dame’s only loss came at Clemson, while Stanford has won by an average of 22 points per game since dropping its opener to Northwestern.

One of three potential matchups of undefeated Big 12 teams remaining, Baylor-Oklahoma State has the makings of a shootout. While the Bears are expected to be the favorite, they know not to take a trip to Stillwater lightly. It was the Cowboys who ended Baylor’s national championship hopes in the last meeting between the teams in Boone Pickens Stadium, and Oklahoma State did so in convincing fashion.

A potential matchup of unbeatens, Florida State-Clemson has become the contest to watch each season in the ACC. The winner of this game has gone on to win the conference’s Atlantic division every year since 2009, and this one could have a playoff berth attached to it. FSU has won three straight against the Tigers, but Clemson has still won four of the last five matchups over the Seminoles in Death Valley. 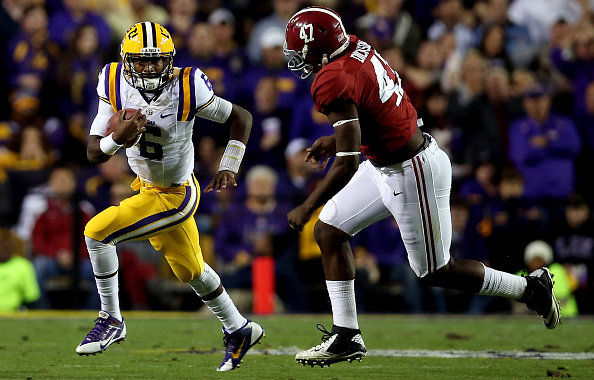 BATON ROUGE, LA – NOVEMBER 08: Brandon Harris #6 of the LSU Tigers tries to avoid a tackle by Xzavier Dickson #47 of the Alabama Crimson Tide during a game at Tiger Stadium on November 8, 2014 in Baton Rouge, Louisiana. (Photo by Chris Graythen/Getty Images)

Alabama head coach Nick Saban attempts to defeat the school he led to a national championship in 2003 for the fourth straight time. LSU, led by running back Leonard Fournette, is the last remaining undefeated team in the SEC, and this game is sure to have significant national championship implications. A loss for Alabama should virtually end the Crimson Tide’s SEC and national title aspirations.

The Spartans haven’t forgotten that Ohio State asserted itself as a national championship contender in East Lansing last season. Neither team has been overly impressive this year, but this contest will likely decide the Big Ten East and perhaps a spot in the College Football Playoff. Following an improbable 27-23 win in Ann Arbor last week, Spartan fans have to feel that — just maybe — college football destiny is on their side.

There are some who propose expanding the College Football Playoff system to eight teams, but this could be a playoff game played in November. Baylor rallied from 21 points down in the final quarter last year to beat TCU, 61-58. The Horned Frogs, as a result, were left out of the playoff, but that could change with a win this year in Fort Worth. This will be TCU’s final game of the regular season, and most expect a playoff berth and Big 12 championship to hinge on this contest. It’s a college football feast on the day after Thanksgiving.