There are a number of new faces at prominent Big Ten programs this year, with Mike Riley now at Nebraska and Paul Chryst at Wisconsin, but the loudest noise made this offseason came out of Ann Arbor as former Michigan quarterback Jim Harbaugh tries to right that ship.

In the nation’s most talked about conference, the SEC, there is only one new face on the sidelines, and that’s Jim McElwain at Florida. While it’s safe to say that fans in Gainesville aren’t as excited for McElwain as fans in Michigan are for Harbaugh, the two coaches will face similar challenges in their first seasons at new schools.

While Florida and Michigan have each gone 12-13 over the last two years, their arch-rivals have managed to stay at or near the top of the college football world. Michigan’s hatred for Ohio State is well documented as is Florida’s for Florida State, but over the last three years, no two programs have had more success than the Buckeyes and the Seminoles.

Ohio State and FSU are a combined 77-6 since 2012 with two combined perfect seasons, four combined conference titles and the last two national championships. For Michigan and Florida to gain respectability from their biggest rivals, they’ll have to compete with the nation’s best. 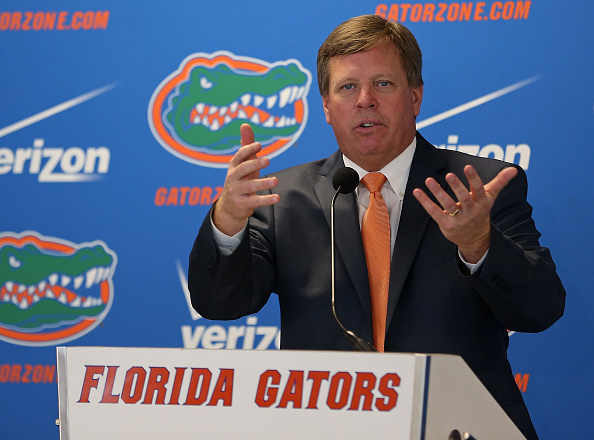 Each coach finished strong on the recruiting trail, but there remains a lot of work to be done. McElwain actually turned in a top 25 class despite being on the job for just a couple months, but the biggest question at each school will be quarterback.

At Florida, Will Grier is expected to battle incumbent Treon Harris for the starting job. Harris averaged a solid 9.2 yards-per-attempt last season, but completed fewer than 50 percent of his passes on 111 attempts. Grier has yet to appear in a game for the Gators, but is said to have more upside.

Shane Morris hopes to finally get his chance to shine after an up-and-down career from former high school All-American Devin Gardner. Morris has a big arm, but went just 14-for-40 passing last season. The likely choice to start is Iowa transfer Jake Rudock.

With the effectiveness in the passing game in question, Michigan will likely rely heavily on backs De’Veon Smith, Derrick Green and Ty Isaac. Florida may need to do likewise with Kelvin Taylor and Adam Lane.

The strength for each team appears to be the defense, as each allowed just an average of 311 yards-per-game last season. Devin Fowler may be gone for Florida, but Antonio Morrison is stellar at linebacker, and Vernon Hargreaves III headlines perhaps the SEC’s best secondary with Marcus Maye and Brian Poole.

Michigan will have to find a way to replace linebacker Jake Ryan and its top two sack leaders, but the linebacker tandem of James Ross III and Joe Bolden is a good one. Cornerback Jourdan Lewis returns as well after leading the team in pass break-ups and interceptions last season.

Harbaugh and McElwain will each be given a grace period as new men on the job, but with arch-rivals Ohio State and FSU climbing to the college football pinnacle over the last two years, that grace period will be small.

The good news for McElwain is reclaiming that state of Florida has almost always led to bigger championships, whether it was the Gators, Seminoles, or Miami Hurricanes. While Ohio State head coach Urban Meyer is currently on top of the world, the same could have been said for Pete Carroll at USC before Harbaugh came to Stanford. Harbaugh is well aware that coaches that can’t beat Ohio State won’t stay last long in Michigan. Just ask Rich Rodriguez.