Ole Miss and Baylor endured hard times on the gridiron for decades.

When you live in places that care about being good at football — Ole Miss used to be a superpower under Johnny Vaught in the 1950s and 1960s; the state of Texas will never not care about football, and Baylor tasted some Cotton Bowl glory many years ago under Grant Teaff — a long period of starvation makes the hunger to win that much more acute.

When people — and the institutions which house them — reach a certain level of ravenousness in the pursuit of an elusive level of success, they often respond with a level of creativity they didn’t know they possessed.

Sometimes, this creativity is confined to the craft itself. Coaches simply find better ways of drawing up ball plays. Administrators simply pick better coaches, who merely have a better way of connecting with recruits.

Other times, this creativity is not a matter of being genuinely more skilled at coaching football, or more artful at making a human connection with better players.

Creativity, like any other human capacity, can be used in the service of our lesser and lower impulses, not the better angels of our nature.

It is hard — if not impossible — to conclude, at the end of this week, that Ole Miss and Baylor have thoroughly soiled themselves in their respective attempts to climb the mountain in big-time college football.

To be fair to each school, it’s not as though they’re the only ones making missteps. Just look at Alabama, where an assistant coach is out the door to minimize NCAA scrutiny and subsequent punishment. Look at Tennessee, which has drowned in all sorts of controversies pertaining to inappropriate sexual behavior… and then staged a gathering of coaches in the midst of the firestorm to say that the football program is just fine.

Yet, Alabama hasn’t been caught naked in daylight to the extent that the program looks really bad. As for Tennessee, well, the Vols aren’t even all that good yet.

Let’s just say that there’s a way to operate in college football’s gray areas and shadows. There’s also a wrong way… and that’s the path Ole Miss and Baylor have clearly followed.

This isn’t a story about the need to avoid cheating, you see. It’s a tale of how some schools cheat well and cleverly, while others do so clumsily and with little regard for the safety of other human beings, especially vulnerable women. 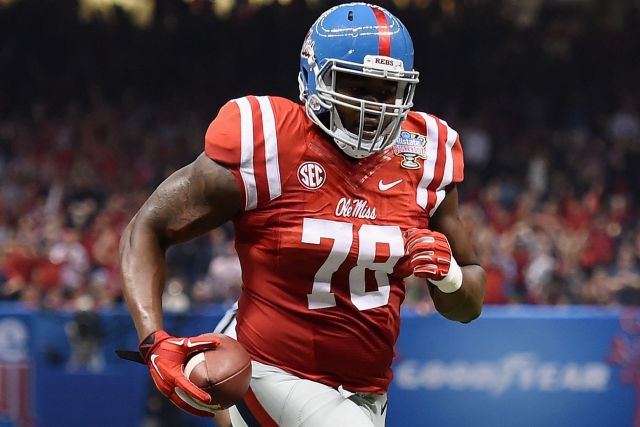 Thursday night’s Laremy Tunsil trainwreck at the 2016 NFL Draft — like much of what we’ve seen at Ole Miss — concerns the money-based side of cheating, at least as far as NCAA rules are concerned.

(Again, it needs to be repeated for the sake of clarity: This is not centrally a stern lecture against cheating, at least not on the money side of the equation, because I feel athletes should be generously compensated with take-home pay for their services as the entertainers they are. The violence-against-women angle, much more in play at Baylor — as is the case at Tennessee — is a different story.)

Laremy Tunsil asked if he took money from a coach. "I'd have to say yeah."

This development follows months and months in which the Ole Miss program has fallen under the NCAA’s shadow, with all sorts of shady peripheral figures entering into the mix. The allegations made against Ole Miss are not limited to the tenure of current head coach Hugh Freeze, but some of them are. Tunsil’s miserable draft night — which highlighted his dysfunctional family situation — brought this age-old truth to the surface:

Tunsil's step-dad is another good reminder that, by far, most really big NCAA violations are uncovered when someone feels jilted.

We’ve seen the NCAA step very lightly around the cash cow that is North Carolina MEN’S basketball (yes, emphasis on gender), so I’m frankly not interested in whether the NCAA will punish Ole Miss. What we can all see with our eyes and our brains is that the Rebels have not cheated very well, in their thirst to climb to a place of college football prominence.

Then we turn to Baylor, a much worse aspect of this two-school story. 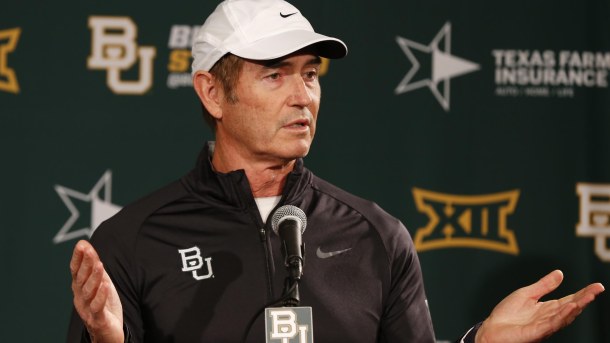 In Waco, the consequences of looking the other way are much more severe, because this is not a question of dollars, but the (perhaps-broken) instinct to care for vulnerable people who — allegedly or actually — might have been abused.

Over the past several years, the incidents have accumulated, one by one, and that list of embarrassments grew this past week with the disclosure of the police report pertaining to former player Shawn Oakman.

There’s simply too much going on at Baylor — all under the umbrella of violent sexual behavior — to continue to ignore or soft-pedal the story. We wrote about the matter earlier this week, and heavyweight columnists are doing so as well:

Column: Baylor football's been fun to watch, but it's time to shift attention to its awful sexual assault pattern. https://t.co/RVw5cfql2C

Giving money to a college athlete (at Ole Miss) is not something I view as fundamentally, morally wrong — not when that athlete is serving a billion-dollar athletic-industrial complex.

What’s happening at Baylor — a Baptist school for those unaware — is a sin against God.

In many ways, the waywardness in evidence at both schools is dramatically different in real-world significance. In an ideal world, most of what’s happening at Ole Miss wouldn’t be considered worthy of NCAA investigators’ time and attention. What’s worth mentioning about Ole Miss, though, is simply the brazen and clunky nature in which the program — led by Freeze — continues to validate all the knee-jerk suspicions which accompanied the emergence of Saturday-afternoon success. The Tunsil draft-night drama showed that the emperor has no clothes in Oxford.

I feel terrible for Tunsil, who has at least a few friends or relatives who seem to be absolute jerks. (Tunsil can now pay his own bills and carve out — one hopes — his own circles with people who have his best interests in mind.) However, the Ole Miss side of the equation was good for a chuckle or two. This doesn’t flow from any anti-Ole Miss animus, but from an awareness of how transparent the connection is between paying players and winning more college football games than the Rebels did in previous decades. It makes the NCAA look foolish, and it makes this larger theater of policing money — often given to players from disadvantaged backgrounds — look more like the joke it almost always has been.

As for Baylor, however, it’s a very dark story, a damning portrait of a football ascendancy being built on a foundation of injustice and a stubborn refusal to value the welfare of vulnerable young women.

Ole Miss might have lit up Twitter on draft night, and a lot of SEC folks might be having a good chuckle at Hugh Freeze’s expense, but when the laughter dies down, the Baylor side of this two-school stumble is the far bigger and more important — and certainly more shameful — college sports crisis.

Ole Miss and Baylor almost played in the 2016 Sugar Bowl, but Baylor was upset at home by Texas. The schools will, however, meet in 2020 — at least, they’re scheduled to do so.

One wonders if Hugh Freeze and especially Art Briles will be around by then. Regardless of that point, it’s already hard to deny the notion that each school, so desperate in the desire to become relevant in college football, has not cheated artfully. Ole Miss grabbed the headlines on draft night, but Baylor’s wrongdoings — some merely alleged, some which can already be acknowledged — carry a much greater human cost.

What price victory? For Ole Miss, it’s largely embarrassment. For Baylor, it’s something much worse.