I stepped foot inside the newly renovated Kyle Field unsure of what I would see. I had never before stepped foot on the Texas A&M campus in College Station, Texas, but I was about to get a behind-the-scenes tour of the longtime football home of the Aggies just days before opening its doors to the 12th Man for the 2015 home opener with Ball State. Construction and renovation crews were working around the clock to get Kyle Field just right for the first game of the season, as Texas A&M did not let a second of a two-year renovation project go to waste.

I was invited for a social summit by Populous, the firm hired to lead the renovations at Kyle Field and other facilities on campus. Through the genorisity of Populous and the warm welcome from representatives at Texas A&M, I was given a new perspective on the design process for athletic venues, from college football to the NFL; MLB to the NBA; and NHL to Major League Soccer and even the Olympics.

There was a lot to learn about the future of the industry, and there are some fantastic developments in the works that will one day make the gameday experience a bit more technologically advanced on the field (literally), as well as giving us the ability to flawlessly simulate the gameday experience with a 360-degree approach anywhere in the world.

I can touch on some of those ideas at a later time. For now, I want to laud the efforts made at Texas A&M to retain the identity of Texas A&M football while also making upgrades around the stadium to usher this venue into the modern era.

First, some perspective on how Texas A&M amended its plans for Kyle Field in a relatively short period of time.

Go back a few years before the invitation to the SEC was extended to Texas A&M. As a member of the Big 12, the leadership at Texas A&M was already contemplating renovating Kyle Field. What may be a bit of a surprise to you is the Aggies were close to moving forward with plans that would actually reduce the total seating capacity, not increase it. In today’s world that seems almost unheard of. After all, more seats means more tickets sold, which means more money to the university.

Texas A&M had some foresight on the future of the gameday experience, which included concerns over decreasing ticket sales as fans were starting to stay home for games more and more around the country. Texas A&M’s leaders wanted to find ways to enrich the gameday experience for all, and that meant adding more restrooms and wider concourses where possible. That would have led the school to trim down the seating capacity to make it all work.

Now, Texas A&M wasn’t exactly going to demolish one whole side of Kyle Field. The changes would have been more subtle and minimal in scale. Then, however, Texas A&M joined the SEC, and Johnny Manziel became a household name. Texas A&M benefited in a big way and changed the discussion in terms of what to do with the stadium.

The new Kyle Field should be nicknamed The House That Johnny Manziel Built, because it is in a figurative sense. Manziel may not have had a hand in the renovation work, but his Heisman Trophy season and thrilling win over Alabama in 2012 took the enthusiasm for Texas A&M football to new heights. Seeing this, Texas A&M looked for ways to capitalize on the new era of the program as an SEC member. Donations started coming in left and right, and fans were more than willing to chip in any way they could to help make Texas A&M the signature program in the state of Texas. Now, instead of reducing the seating capacity, Texas A&M felt comfortable expanding to the point where Kyle Field would be the largest football stadium in the SEC.

The decision came down to whether or not to build a brand new stadium that would last for years, or to simply update the current stadium. Baylor and Houston were already moving forward with plans for new stadiums, and TCU was updating its stadium as well. Texas A&M and Populous scouted multiple locations to determine the best site for Kyle Field. After evaluating eight different locations on and around campus, it was determined the current location of Kyle Field was the ideal spot in terms of ease of mobility, sightlines and more.

Renovation became the school’s decision, at a hefty price tag of $450 million. In order to make it all work, Texas A&M needed patience, because everything desired would take two years to complete. Perhaps the most notable supporter of this cause was Aggie head coach Kevin Sumlin. He had some input on what changes he wanted to see; Texas A&M and Populous delivered.

The crowd was brought closer and more on top of the action by dropping the field level seven feet and building canopies at the top of the stadium to keep noise in (while also providing relief from the sun for those in the right spots). Sumlin even scratched two straight spring games so crews could continue working on Kyle Field. 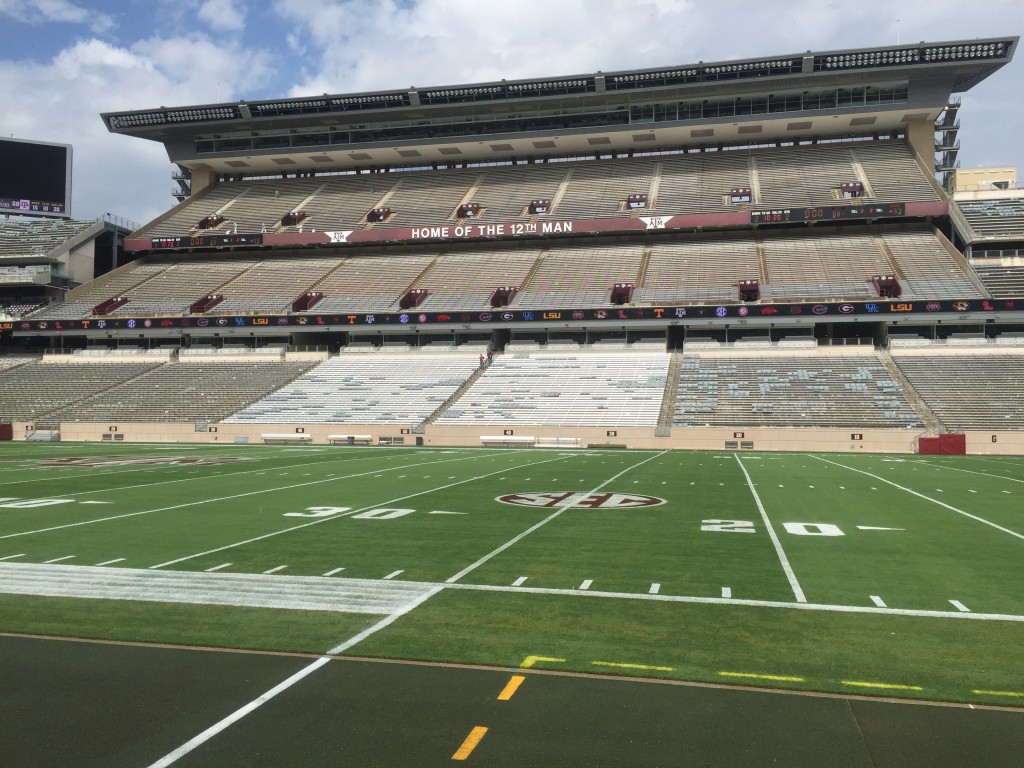 A look at the canopy over one side of Kyle Field, as well as the view from the front row seats. Photo: Kevin McGuire

Fans making their way to Kyle Field will notice other enhancements as well. There are now 300 percent more female restrooms. Special “Cool Zones” can be found around the stadium so fans can escape the Texas heat while also grabbing a hot dog from the concession stands.

Fans may also notice another enhancement if they happen to be using their phones. Kyle Field is the first stadium in the country, pro or college, to have a full Corning 1 fiber system installed throughout the stadium. With this system in place, fans using AT&T or Verizon phones will experience an advanced network (Sorry Sprint and T-Mobile users). The new system has also caught the eyes of various NFL franchises currently reviewing potential stadium upgrades. The Atlanta Falcons and Minnesota Vikings are among the NFL teams which recently paid visits to Kyle Field, and the University of Oklahoma was scheduled to make a visit soon. (Populous is getting to work with Oklahoma as we speak.)

In signature Texas fashion, Texas A&M was proud of the technological advancements in Kyle Field, and Vice Chancellor for Business Affairs Phillip Ray said the 49ers’ new stadium in San Francisco doesn’t even compare to what Texas A&M has.

Now some real talk. As with all stadium upgrades in every sport, there are plenty of things that can be done for the more common fans that fill the majority of the seats for a game, but every renovation project goes a little bit deeper to make an enjoyable experience for the folks with the real deep pockets. Texas A&M is no exception.

The new Kyle Field has a large Hall of Champions on the west side of the stadium. This is a grand open area that serves as the corridor to the premium seats. The area is open to all fans until kickoff at Texas A&M, and it is well worth a stop for the visual displays that share Texas A&M’s history and allow for some fun photo ops. 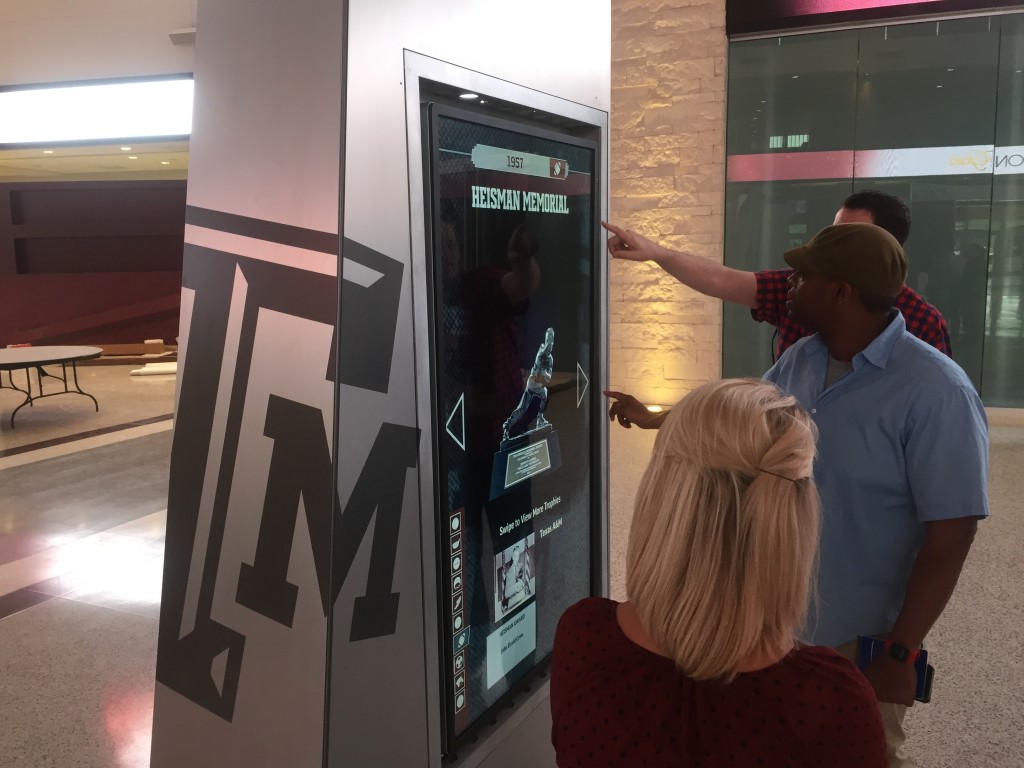 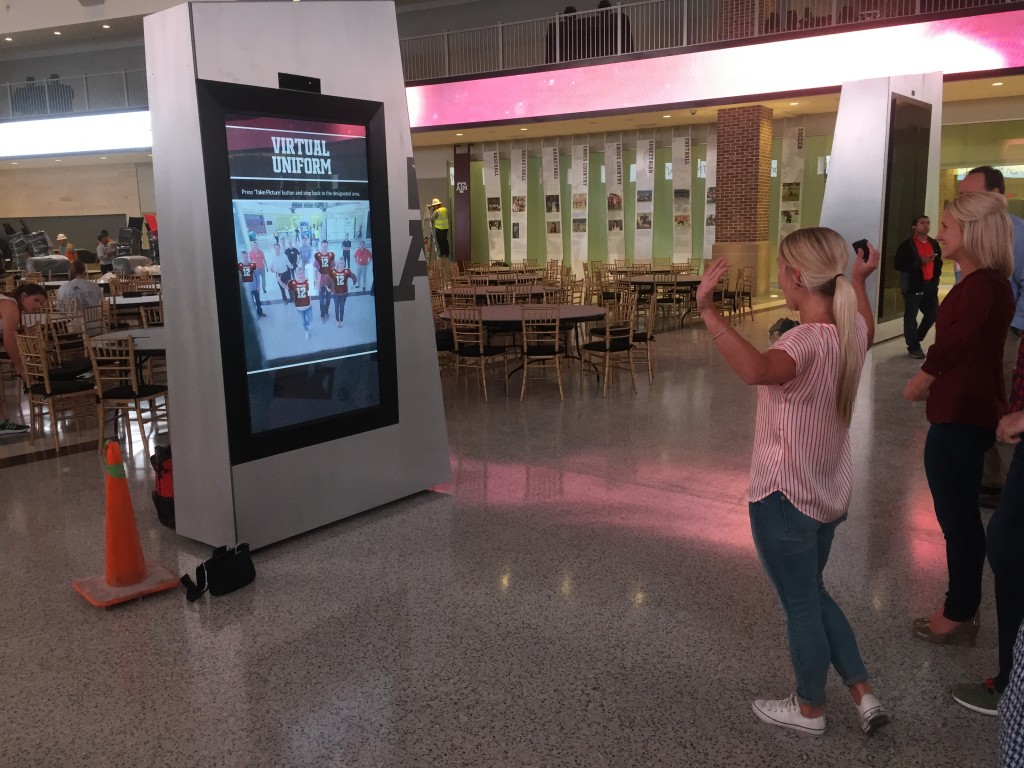 This display gives fans a chance to wear a digital Texas A&M jersey and share with friends and family.

Those with a seat in the new luxury boxes are in for a rich treat as well. Check out the lobby to the Legacy Suites. It has a grand piano and some great artwork honoring iconic moments in Aggie history… 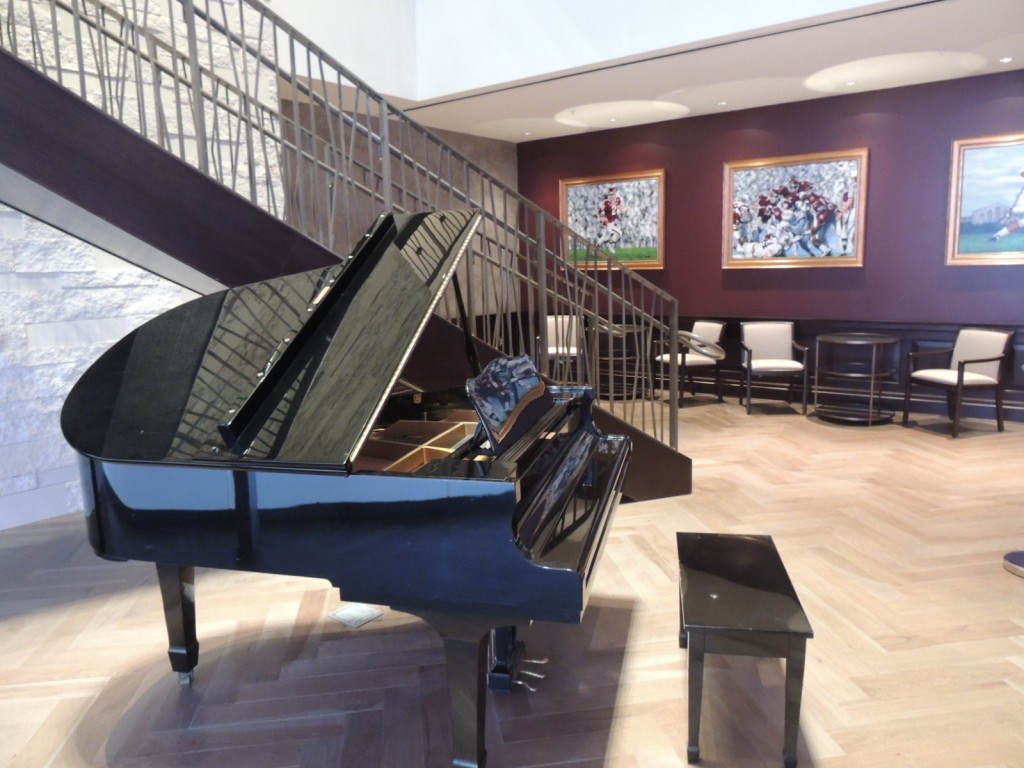 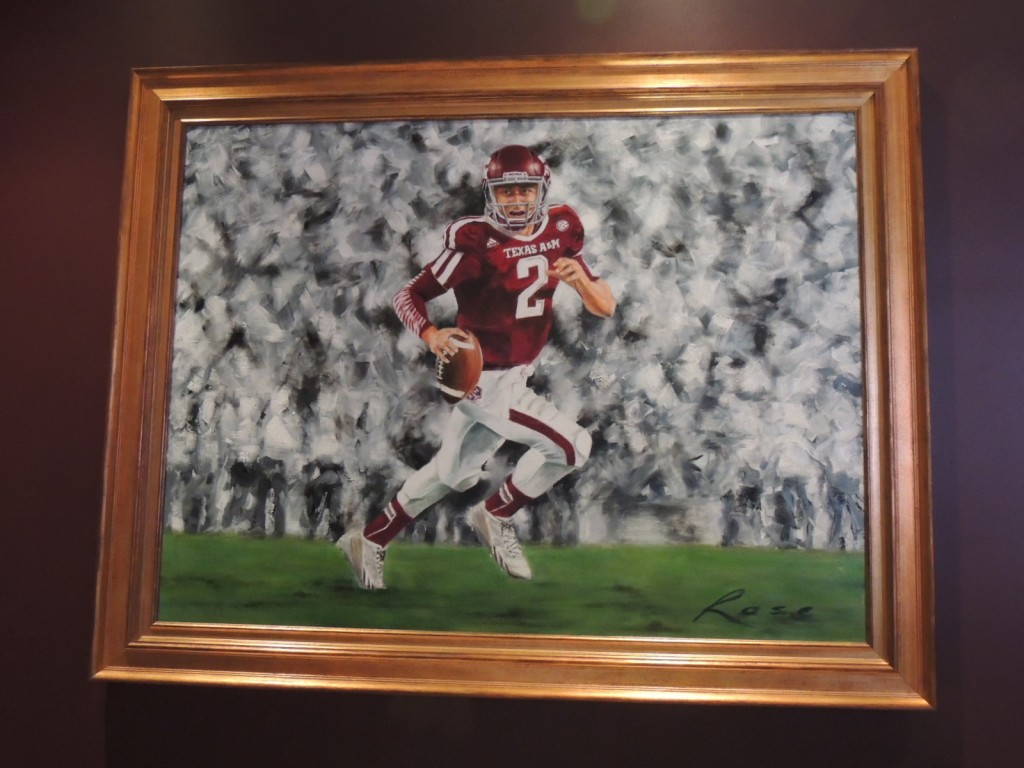 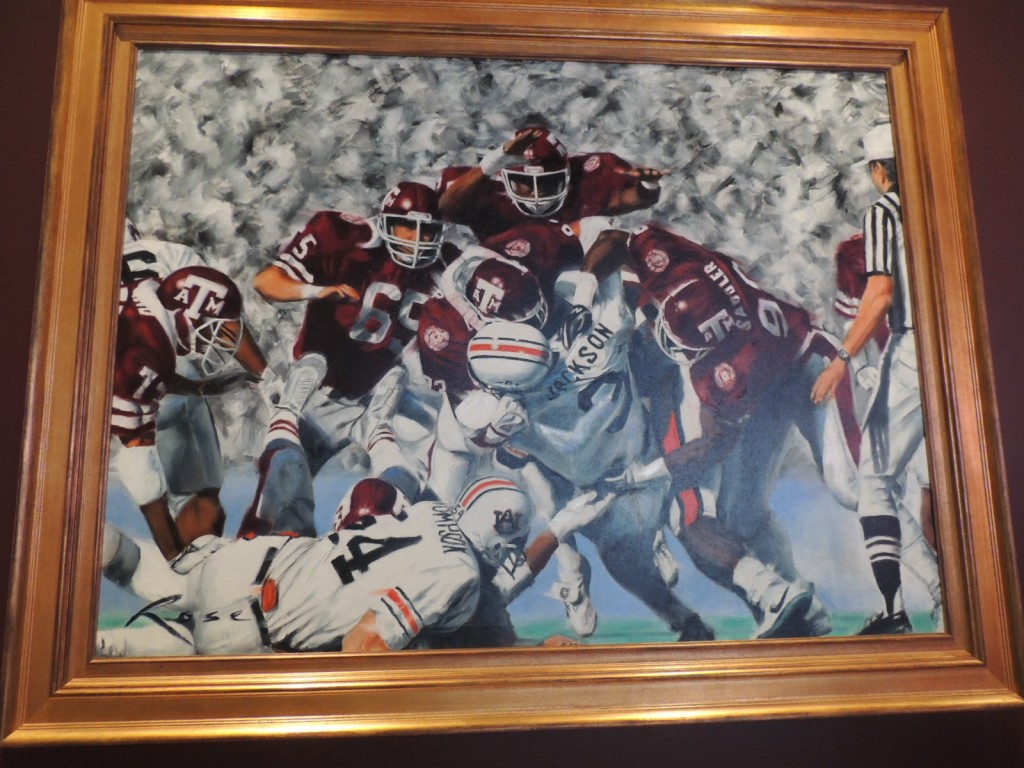 Bo Jackson makes an appearance as well, in an image taken from A&M’s victory over Auburn in the 1986 Cotton Bowl.

After entering the lobby, Legacy Suite visitors go up a spiral staircase or take an elevator, where they can then enter and enjoy a game from the customized suite. They really are customized, which you would expect to be true given the financial commitment those with Founder’s Suites have made. A 20-year lease for a spot in the Founder’s Suites comes with a $10 million donation goal over a the next 10 years. Texas A&M claims the 12 Founder’s Suites (Texas A&M loves the number 12) sold out in just a few hours.

Those with the luxury of having a lease were given design choices, from different counter -top options to how many TVs, where the TVs go, and where seating is set up. Having stepped in a couple of different suites, you could see the lease owners took advantage of the options. For example, one suite had one giant TV on a wall, with two smaller screens to each side. Another suite had four equally-sized TVs on a wall, with a larger screen on a different section. 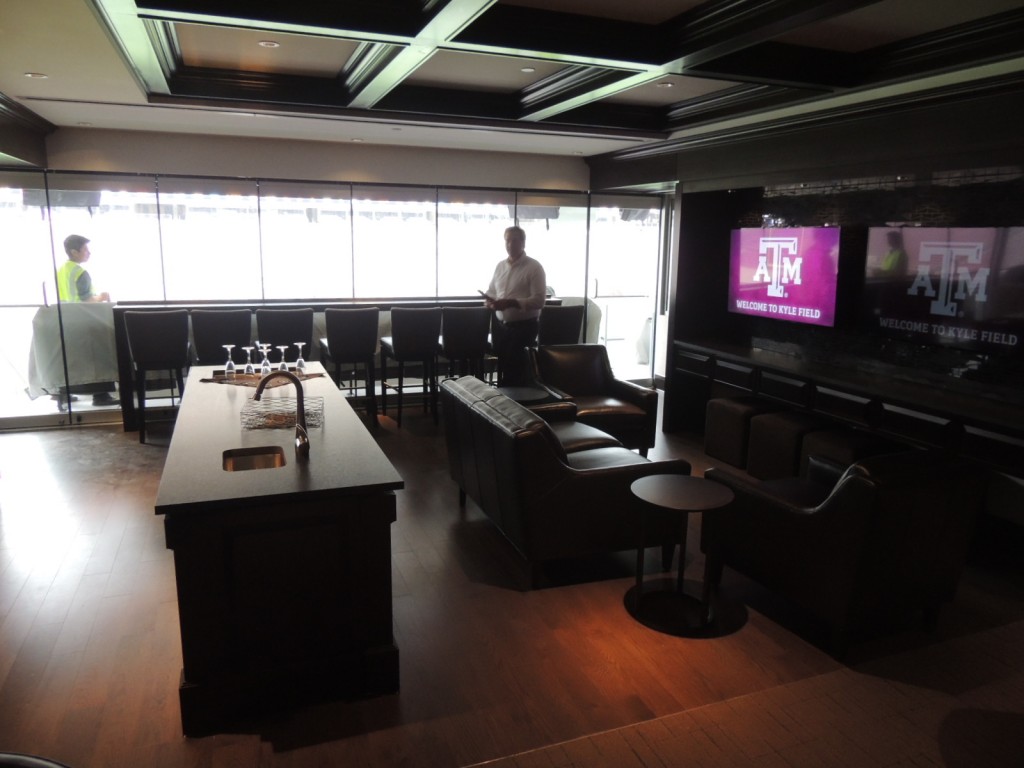 Each Founder’s Suite comes complete with kitchen-area, seating and TV options that were chosen by the suite owners.

Each suite I stepped in had some of the same design elements. Each suite I saw had a pair of Texas A&M football helmets on display. The view was not too shabby, either. 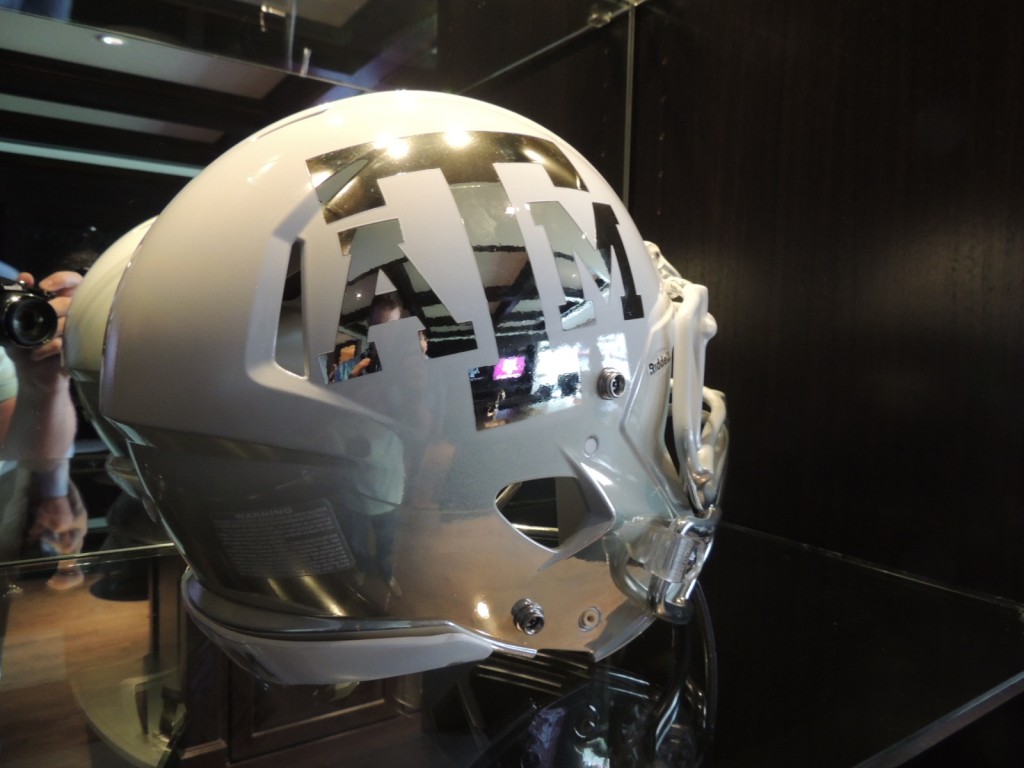 Texas A&M’s white helmet with a reflective chrome finish in the Founder’s Suite. 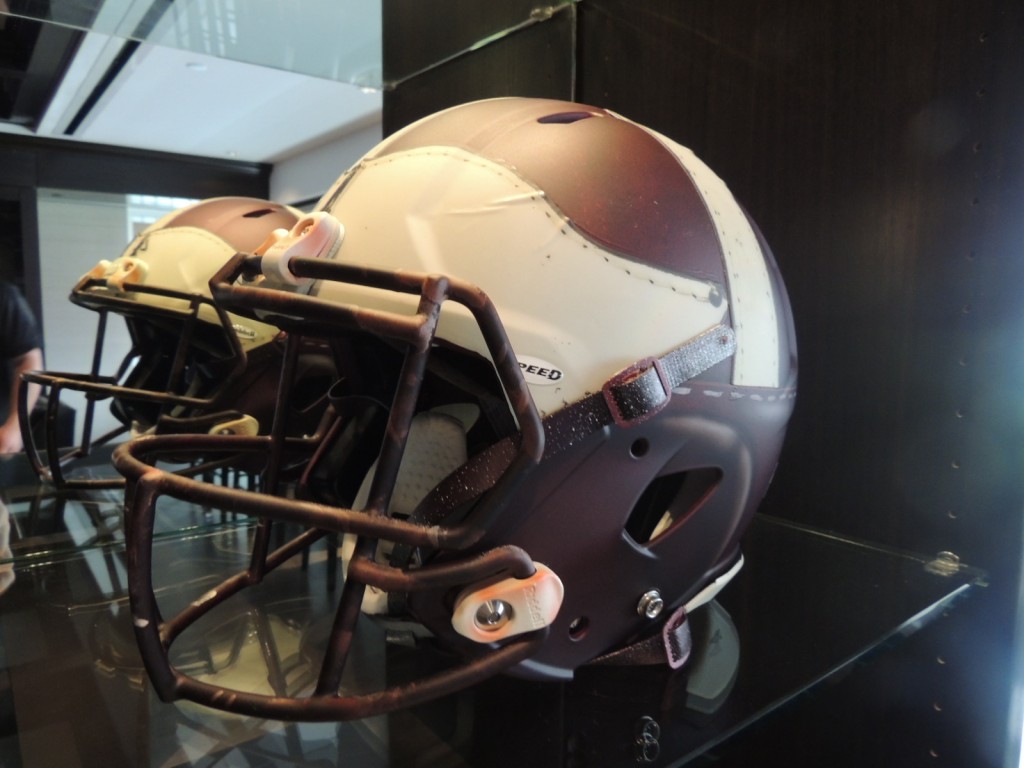 The throwback helmet worn by Texas A&M in 2014 was also on display in the Founder’s Suites. 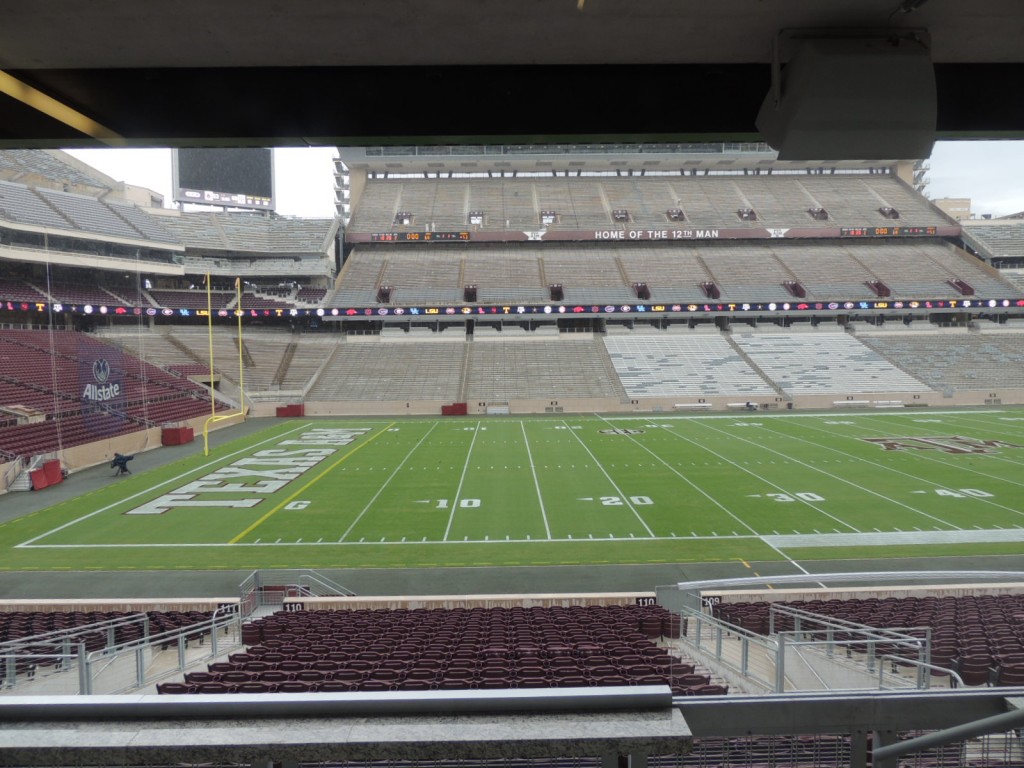 The view from one of Texas A&M’s 12 Founder’s Suites.

Texas A&M’s 12 Founder’s Suites may be the top level of suites, but the other luxury boxes are tolerable, to put it quite mildly… 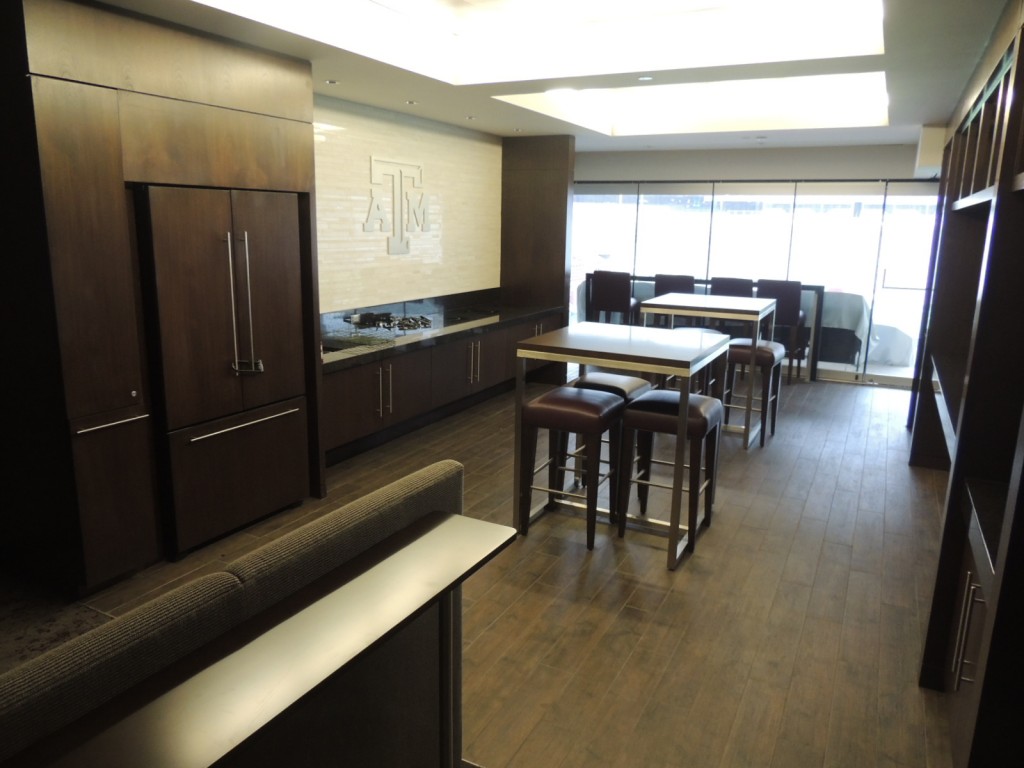 A view of one of Texas A&M’s suites. 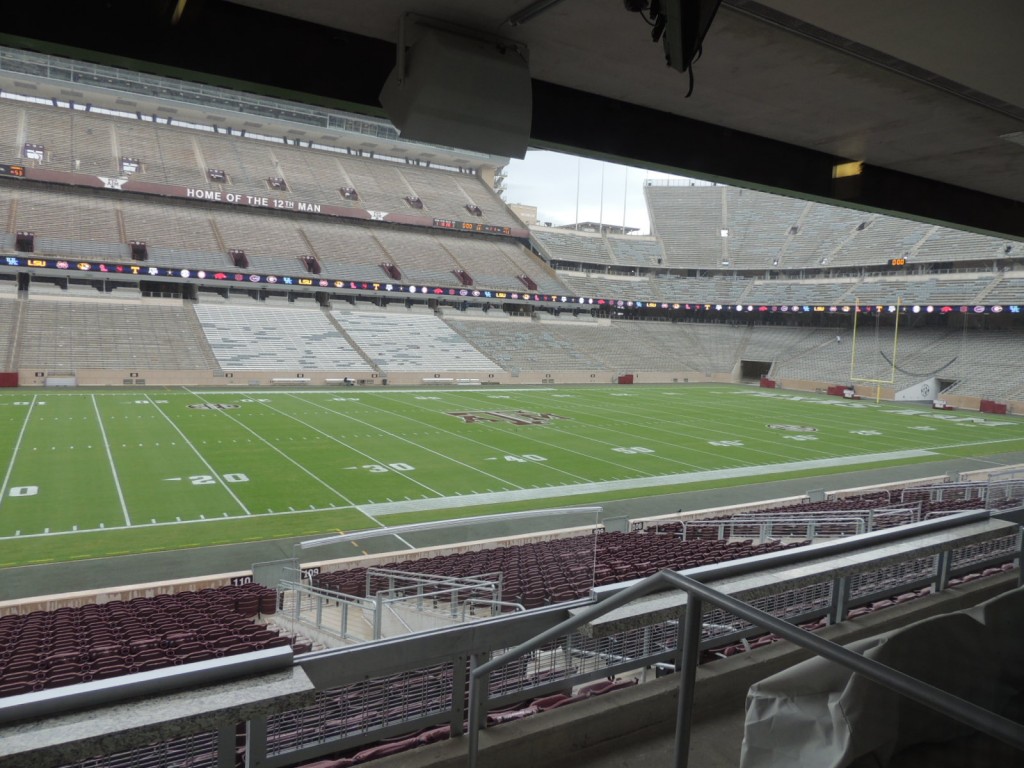 The view isn’t bad from here either.

As I said above, I never stepped foot in Kyle Field until last week, so I really cannot compare what the stadium was like to what it is now. However, I have stepped foot in a good handful of football stadiums of various ages, so I have an idea of what it is like to go to a stadium in dire need of an upgrade. I have also visited stadiums that are more modern.

My experiences inform this next statement: I strongly believe Texas A&M has succeeded in finding a perfect balance of modern-day amenities and a traditional look. For Texas A&M, keeping its 12th Man identity was extremely important, and the school managed to keep it and build around it without losing itself in the shuffle of providing modern features.

Yes, the scoreboard is huge. Yes, there is a section of the stands that has TVs by their seats. Yes, Texas A&M has fabulous luxury suites and high-end lounge areas. However, all of this was put together without selling itself out to a more NFL-like experience. For Texas A&M, embracing the college atmosphere was important to preserve, and Populous helped the school knock it out of the park.

Unfortunately, I was unable to stick around another 48 hours to see Kyle Field shine its brightest on gameday. Texas A&M took care of Ball State to improve to 2-0, continuing to show improved defensive play while the offense continues to pile up big plays and points. I have no idea just how this season may end, or the next. What I do feel comfortable saying is the Aggies have a beautiful place to call home for years to come.