1 Burning Question: Can LSU get back on top of the SEC West?

The LSU Tigers have experienced two dips under Les Miles. The first was the 8-5 season that came directly after 2007’s National Championship. The second was the 8-5 season of 2014. Miles and LSU responded from the first dip by eventually climbing back to the top of the SEC and winning the conference championship in 2011. The big question now is if they can bounce back in the same way in 2016 or 2017.

This is Leonard Fournette’s third and final year at LSU. Fournette needs 1,570 yards this season to become LSU’s all-time leading rusher. It would be a shame to have a running back break the school record without tasting the success of a SEC Championship.

Unfortunately for Fournette, he missed the offensive talent boom at LSU by one season. He missed playing with Zach Mettenberger, Jarvis Landry, and Odell Beckham. Instead, he is surrounded by question marks.

The good news for LSU is that there aren’t as many offensive question marks as there were last year. LSU managed to go 9-3 in 2015 and finish with an offense that placed fourth in total offense and sixth in scoring offense in the conference. The offense is trending in the right direction.

The defense will likely be what makes or breaks LSU this season. The loss of defensive coordinator John Chavis was big for LSU. Last season under Kevin Steele, the Tigers fell from first in the conference in total defense to fifth. They went from second in the league in scoring defense to tenth. Enter Dave Aranda. Aranda’s defense allowed just 13.7 ppg last year at Wisconsin. While the Tigers missed Chavis in 2015, they certainly traded up over Kevin Steele with the addition of Aranda.

LSU and Les Miles are always an interesting team to watch and it will be no different in 2016. They have a very tough opener in Green Bay against Wisconsin, but they get both Alabama and Ole Miss at Tiger Stadium. This could very well be the year of the Tiger. 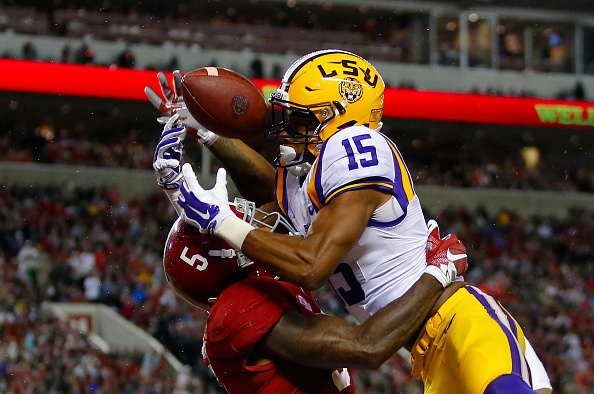 TUSCALOOSA, AL – NOVEMBER 07: Malachi Dupre #15 of the LSU Tigers misses a touchdown interception due to pass interference on Cyrus Jones #5 of the Alabama Crimson Tide during the fourth quarter at Bryant-Denny Stadium on November 7, 2015 in Tuscaloosa, Alabama. (Photo by Kevin C. Cox/Getty Images)

10 — This is the number of times LSU turned the ball over in 2015. LSU had the least amount of turnovers in 2015 and finished second in the conference in turnover margin. It only lost the turnover battle in two games, one of which was a loss to Ole Miss. Controlling the ball and not making mistakes will be a big key again for them in 2016.

69.44% — When opponents got into the red zone against LSU, they scored a TD 69.44 percent of the time. This ranked the LSU Tigers dead last in this metric in the SEC and 106th in the nation. The defense needs to get stronger when they are on a short field.

Why it matters: Ole Miss has finished ahead of LSU in the SEC West rankings the past two years and last year, they beat the Tigers head-to-head. Has Ole Miss surpassed LSU on the SEC totem pole? That has to be a question the LSU fanbase is asking themselves. LSU needs a win here to swing this series back to their favor. Even though Wisconsin, Mississippi State, Auburn and Florida come first on the schedule, this is the first big-time must-win divisional showdown.

Why it matters: It’s Alabama and the Tide have beaten LSU five straight times. Do I really need to elaborate? The road to the SEC Championship goes through Alabama.

Why it matters: Arkansas has beaten LSU two straight times. Do the Hogs have their number? Like the Ole Miss game, this game is important to make sure that LSU stands tall in the SEC West pecking order. If the Tigers lose three straight to the Hogs, it would be impossible for the Tigers to claim that they are still the second best team in the SEC West.

Leonard Fournette, RB – Some touted Fournette as a Heisman candidate in 2015 and he was in the early part of the season. The truth was that LSU just wasn’t a complete enough team for Fournette to get the hype train going. This year, LSU is going to be a more complete team. Fournette is one year older and he’s simply going to be a beast.

Brandon Harris, QB – Despite being the clear starter, there are still question marks surrounding Harris. His completion percentage was only 53 percent last season, which ranked him near the bottom of the SEC. LSU also didn’t stretch the field very well last year. The Tigers placed 13th in the SEC in passes over 10 yards. The good news for Harris is that he has Malachi Dupre and Travin Dural to throw the ball to and they will be one of the best receiver tandems in the SEC.

Kendell Beckwith, LB  – Beckwith is the type of defender that is a coach’s dream. He can cover any back or tight end. He also has a great sense of instincts and a knack for knowing where to be and when he’s supposed to be there. Beckwith had his best year in 2015, but he will far surpass that in 2016.

Jamal Adams,  S – Adams is a player. He’s a big hitter. He’s a bundle of energy. He’s the guy that will set the tone for this defense and along with Beckwith could very well be the best 1-2 defensive punch in the league.

5. LSU will open the season with a win over Wisconsin

Wisconsin is not going to be an easy game for LSU. The Bayou Bengals are going into hostile territory and Badgers head coach Paul Chryst will have them ready to play. Look for this to be a struggle from start to finish. The Tigers will have to fight to win and they will be a better team for it.

Leonard Fournette will cap off his brilliant three-year career at LSU by rewriting the Tigers record books. Fournette ran for over 1,900 yards in 2015. He needs less than 1,600 to break this record and he will do it in 2016.

3. LSU will lose to Alabama for the sixth straight time

Alabama has owned LSU over the last five years. Unfortunately, that will continue this season. Some way, somehow, the Tide will beat the Tigers in Tiger Stadium.

2. LSU will win the Sugar Bowl

Despite losing to Alabama, LSU will finish the season on an uptick and will be clearly viewed as the second-best team in the SEC. This gets them a birth in the Sugar Bowl, which they will win in Fournette’s final game.

There is a lot of competition this year for the Heisman Trophy: Deshaun Watson, Christian McCaffrey, Baker Mayfield, Dalvin Cook, Nick Chubb, Samaje Perine, and the list goes on and on. At the end of the year, Fournette will stand tall as the 2016 Heisman Trophy winner.