Oklahoma State fans don’t like to hear it, but the Cowboys were one of the most overachieving teams in the country last year. That is not a bad thing. It was last year, when Oklahoma State was brought up in potential College Football Playoff discussions and often dismissed as being far worse than a 10-0 record would indicate. After all, the Cowboys struggled versus several bad teams and only beat one good one — albeit a blowout win over TCU. How good the Cowboys really were was a matter of national debate, one that often did not end well for Oklahoma State.

But with the benefit of hindsight, we can look ahead to the 2016 season with the knowledge that the Cowboys indeed overachieved last year. They did well against inferior competition and did a tremendous job in pulling through close games. The Sugar Bowl loss showed that coach Mike Gundy’s squad was just a little out of its league talent-wise with a very high ranking.

This is a new year, though. The team is more experienced and more talented. It has shown that it can come through in the clutch. Now the question is whether the Cowboys can build from that in 2016 or whether last year’s overachievements will become underachievements this year. 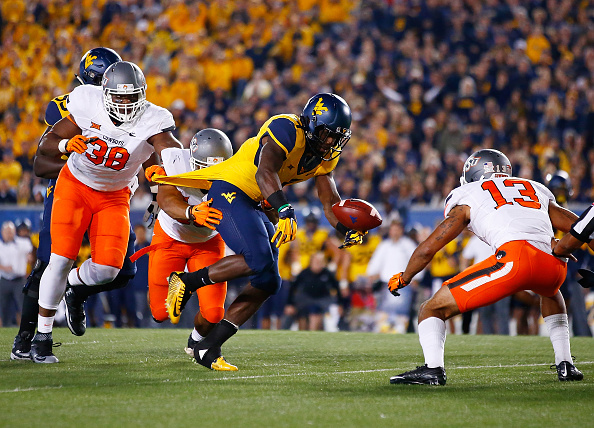 MORGANTOWN, WV – OCTOBER 10: Rushel Shell #7 of the West Virginia Mountaineers fumbles the ball before it is recovered by Jordan Sterns #13 of the Oklahoma State Cowboys in the first half during the game at Mountaineer Field on October 10, 2015 in Morgantown, West Virginia. (Photo by Jared Wickerham/Getty Images)

3.6 – This was Oklahoma State’s yards per carry in 2015. Quite simply, this isn’t good enough. The problems could have come from a mixture of offensive line issues and the lack of a very good running back, but something has to improve the rushing game this season. If the running game is unreliable, the offense can be forced to become one-dimensional, which isn’t a good thing for any team.

+13 – This was Oklahoma State’s turnover margin in 2015. Oklahoma State did not particularly excel in forcing turnovers last season. The Cowboys recovered a whopping 63 percent of fumbles last season, fifth-most in the country. That is not a stat that is likely to continue, law of averages and all that coming into play. Those turnovers helped Oklahoma State in several close games. If the Cowboys had a more average turnover ration, it’s entirely possible their record would have been 8-5 instead of 10-3. It will be important to track in 2016 if they can continue their above-average recoveries.

3 Key Games that will Make or Break the Season

Why it Matters: The Cowboys played a weak non-conference schedule last year, though that is an aberration. Most years, they do play at least one Power Five team out of conference. This game against Pittsburgh will be important for Oklahoma State’s reputation. Also, it could have some dark horse Playoff implications as Pittsburgh could very well be a contender in the ACC.

Why it Matters: In the past few years, the group of Baylor/TCU/Oklahoma/Oklahoma State have decided the Big 12. With Baylor’s current issues, we can expect that to fall to a trio this coming year. Of course, there is always a chance that some other schools can step up and challenge for the conference title (Texas and West Virginia would be my most likely guesses), but coming into the season we have to expect that it will be TCU, Oklahoma, and Oklahoma State competing for it — which makes the round-robin between those three teams paramount.

Why it Matters: It’s Bedlam. Do I have to write anything more? I guess I do, even though being Bedlam is definitely enough to help define the Oklahoma State season. Let’s just add that this season-ending game is very likely to decide the Big 12 and have College Football Playoff implications as well. Who needs a conference championship game when you can end the season with a potential national quarterfinal anyway? 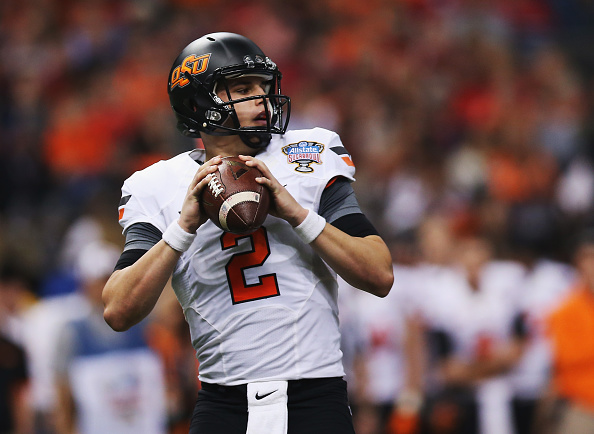 NEW ORLEANS, LA – JANUARY 01: Quarterback Mason Rudolph #2 of the Oklahoma State Cowboys looks to pass against the Mississippi Rebels during the second quarter of the Allstate Sugar Bowl at Mercedes-Benz Superdome on January 1, 2016 in New Orleans, Louisiana. (Photo by Chris Graythen/Getty Images)

Mason Rudolph, QB — Rudolph will have the eyes of the entire offense on him. Last year he had to split time with dual-threat J.W. Walsh, but the offense worked better under Rudolph anyway. He will need to cut down on mistakes this year, but he has a tremendous arm and great presence in the pocket. He is a potential star. Whether or not he makes good on that potential will play a main part in the success of the ‘Pokes this year.

Barry Sanders, Jr., RB — Okay, so the Cowboys return two senior running backs while Sanders is transferring from Stanford, where he could not make any real headway while sitting behind Christian McCaffrey on the depth chart. Why will Sanders be important, then? Because he has excellent name value. In a college football world where television time can influence so much, adding a player with highlight-reel abilities and the name “Barry Sanders” is never a bad thing. Also, it helps that the running game was a bit lackluster last season.

Marcell Ateman, WR — Ateman is big, powerful, and fast. He is actually not the best returning receiver for Oklahoma State statistically, but that shouldn’t matter. Ateman is built in the manner of former Oklahoma State receivers Dez Bryant and Justin Blackmon. He might not possess all of their raw physical gifts, but he is a powerful receiver who has incredible potential. With a talented passer like Mason Rudolph under center (or in the shotgun, because Oklahoma State rarely takes snaps under center), Ateman has potential to make himself a household name if he can become the main receiver.

Jordan Sterns and Tre Flowers, S — Oklahoma State’s defense has some questions, though it does have lots of experience returning. That experience wasn’t great last year, but that doesn’t mean they won’t be better this year. Where the Cowboys do have good experience, though, is at safety. The combo of Sterns and Flowers will anchor down this defense–and the Cowboys may need it, as there are definite questions at cornerback.

5. Barry Sanders will (once again) become a household name

Look, just because someone isn’t good enough to beat out Christian McCaffrey on a depth chart doesn’t mean he isn’t a great running back. In fact, it could mean that he’s the second-best all-purpose back in the country. Barry Sanders, Jr. is ridiculously talented. He is very slippery and has tremendous breakaway speed. He will remind everyone just what his father could do back in the day and will make himself a highlight-reel name in his own right.

4. Oklahoma State will be ranked from coast to coast

Being ranked all year long is not necessarily an accomplishment, especially if a team starts relatively high. A starting ranking at No. 19 in the Coaches’ Poll, and presumably something similar in the AP, means that the Cowboys can probably survive a Week 3 loss to Pittsburgh and stay ranked. Even if that game is a loss, though, Oklahoma State can definitely repeat last year’s result of winning its first seven Big 12 games. With a 9-3 season, and three losses to ranked teams, Oklahoma State will not fall out of the rankings all year — and the season could definitely be much better than that.

3. Mason Rudolph will get a little Heisman buzz

No one will be getting real Heisman buzz this year because we spend all offseason overhyping those names we expect to be big. How can someone, even with an all-time great season, break into the preconceived super-dominance of Leonard Fournette or Deshaun Watson? Rudolph will put up huge numbers and get national attention, though. He might even be the most well-known player in the old Southwest if the Cowboys can beat Baker Mayfield in Bedlam. Because of the regional nature of Heisman voting, he may get some buzz in that region.

Okay, this prediction is a little silly to make as we have no idea who Oklahoma State will play or where. I’ll qualify this statement and explain it. Last year, Oklahoma State had a very good record that got the team into a bowl game that it couldn’t compete in. The Cowboys will be much better this year. No matter what bowl they get, the game will be competitive, even if they face a Top 10 or 15 team.

1. Oklahoma State will win the Big 12

No, the Cowboys are not the most complete team in the conference. That distinction goes to their rivals from Norman. Still, it’s not always talent that decides everything. Oklahoma has a brutal non-conference schedule that could translate into mistakes in-conference, including against TCU in its first conference game. Oklahoma State probably isn’t good enough to be a Playoff contender this year and will probably drop a game or two (including a tough non-conference game against Pittsburgh), but the Cowboys will probably be in very good position when the Big 12 roulette wheel stops.