Every journalist, radio host, and college football enthusiast talked about Big 12 expansion until they were blue in the face this offseason. Meanwhile, Houston head coach Tom Herman has sat back in the willy weeds, waiting to prove to those in doubt that the program he is building has staying power and could help revitalize the Big 12 Conference if offered an invitation.

The Cougars have plenty of experience returning at the skill positions, depth on the offensive and defensive lines, and one of the top coaching staffs in the country to start in 2016. Did I mention that Greg Ward, who should be considered a Heisman Trophy candidate, is back to shred defenses in the air and with his legs?

After an improbable start to his Houston reign that was capped off by beating a Power Five monster in Florida State in the Peach Bowl, Tom Herman’s program has a chance to solidify itself as one of the top programs in 2016.

That starts with a chance to flex its potential Big 12 muscle against Oklahoma — the current king of the conference —  in week one of the college football season and continues with another strong non-conference game at home in November, against a very good Louisville team.

Tom Herman and the Houston Cougars have the perfect canvas laid out to paint their way to a potential College Football Playoff scenario and — at the very least — another New Year’s Six bowl bid.

40.4- That’s the number of points that Major Applewhite’s offense scored per game in 2015. The Cougars were one of just 12 teams in all of FBS to average more than 40 points per contest last year. What is most impressive about the Cougars is their well-balanced attack. Houston had 3,301 yards on the ground and 3,477 yards passing in 2015. The difference of just 176 yards was the best amongst offenses that ranked in the top 20 in total offense last season. Look for that trend to continue with Greg Ward handling the read option and Duke Catalon picking up where Kenneth Farrow left off.

16 – The number of long scrimmage rushing and receiving plays for quarterback Greg Ward that went for 20 or more yards. That total topped all quarterbacks in 2015. Ward also had 44 runs that were over 10 yards — which was one run less than Louisville’s Lamar Jackson, who led FBS quarterbacks in that category. Ward scored 21 rushing touchdowns in 2015 and was a much-improved passer under first-year head coach Tom Herman.

Sept. 3 vs. Oklahoma (at NRG Stadium in Houston)

Why it Matters: The first game of the season will be the very moment in which Houston proves that it’s a contender, rather than an average program that has had a few solid seasons.

Baker Mayfield and the Sooners have their sights fixed on beating Houston and building toward a potential playoff-setter against Ohio State in week three. The Cougars will have other plans in this glorified home game that could put them in the playoff race if they’re able to beat one of the four teams selected for the College Football Playoff last season.

Why it Matters: Perfection was erased in the second-to-last game of the season last year. Houston will be looking to avenge a loss in one of the few games in which the offense sputtered for more than a handful of drives. As Bart Doan wrote at The Student Section in July, Houston is the big dog on campus in 2016, but the Huskies are young and talented enough defensively to take a chunk out of the Cougars’ hopes.

Why it Matters: The second-to-last game of the regular season pits the Cougars against one of the more underrated teams in the country. Last year’s Louisville-Houston contest had eight different lead changes — including five in the fourth quarter. The game ended after Houston blocked a field goal attempt to tie it with less than a minute to go.

Aside from its importance in the College Football Playoff race, this matchup features two of the most dynamic quarterbacks in the land in Lamar Jackson and Greg Ward. That makes this contest a “must watch” for true college football fans. 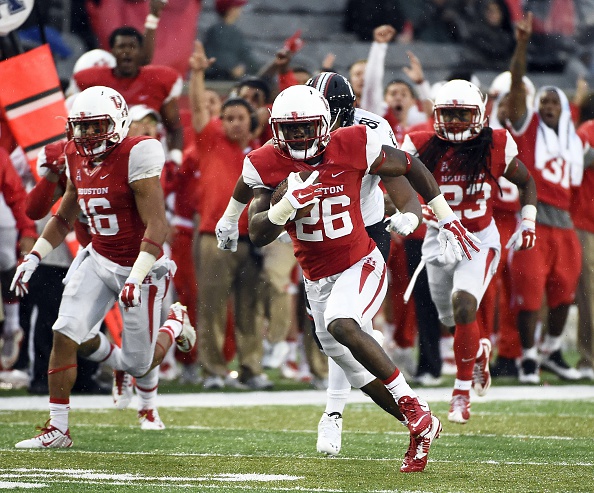 HOUSTON, TX – NOVEMBER 7: Brandon Wilson #26 of the Houston Cougars returns an interception for a 51-yard touchdown in the third quarter of a NCAA football game against the Cincinnati Bearcats at TDECU Stadium on November 7, 2015 in Houston, Texas. (Photo by Eric Christian Smith/Getty Images)

Greg Ward, QB – The locomotive that makes Tom Herman’s read option run is one of — if not the — most underrated players in college football headed into 2016. The former receiver became the first quarterback in Houston history to rush for over 1,000 yards in a season. He completed 67 percent of his passes and asserted himself alongside J.T. Barrett as one of the best read option decision makers in the country. The difference is that Ward is the most dynamic athlete in the country at the quarterback position.

Duke Catalon, RB – What made Houston’s offense one of the most dynamic in the country a year ago was its versatility at different positions and an ability to run a balanced attack through that read option offense. Insert Duke Catalon, who Herman envisions as an Ezekiel Elliott-type player in his offense. The dynamic back should help balance the rushing attack by giving the offense a running back who can withstand more carries than Ward himself.

Brandon Wilson, DB/ST/WR – Coaches love a versatile stud like Brandon Wilson, who is willing to do anything and everything to lead his team to victory. He was the only player in the country last season to score a touchdown on offense, defense, and special teams. Wilson will be depended on as an every down defensive back and could be used as a receiver after scoring two touchdowns at the running back position last season. He has some of the best return skills in the country and could develop as the top pass defender in the conference by the end of the season.

Steven Taylor, LB – One of Houston’s best athletes might be Taylor, who held down the outside linebacker position last season with little or no fanfare. That isn’t because he didn’t make plays. The Chatfield native, who committed to play at Houston as a pro-style quarterback, lives in the opposing team’s backfield. He had an AAC-leading 10 sacks last year and also tallied 18.5 tackles for loss.

While everyone wants to praise returning quarterbacks like Deshaun Watson and Baker Mayfield, Greg Ward Jr. might be the only quarterback across the country who isn’t getting enough recognition.

Fueled by that disrespect, Ward is going to come out strong against the Sooners and force them adjust throughout the second half. By that time, it will be too late for the Sooners to contain the Heisman candidate.

4. The Houston defense will finish in the top 20

What defensive coordinator Todd Orlando did last season was very impressive with a Houston defense that has forced turnovers at a ferocious rate over the last three years. Now, Orlando will have a talented front to work, with an even more athletic secondary and a veteran linebacking corps that has experience in blitzing, coverage, and rush-stopping duties.

The Cougars return five starters from a defense that held Delvin Cook to just 33 yards in the Peach Bowl at the end of last season.

With a quarterback as talented as Ward on the ground, many would think that yards would be hard to come by for the transfer from the University of Texas. Duke Catalon has the perfect frame and skills to offset Ward’s rushing plays and make them more efficient by being a multi-faceted weapon in the rushing game. It might be a slow start for the sophomore, but look for his name to be called regularly when a play is made in this spectacular read option offense.

Yeah, it’s a stretch. Timeline-wise, it fits the school’s desire to keep a very talented coaching staff in place and keep up with what look to be monster ticket sales growing after a record-setting 2015 and 16.

Essentially, this prediction means that Houston will do what it can on the field to put itself in a position to grow into the Big 12 market. In other words, the Cougars will go a perfect 12-0 in the regular season or lose one game in non-conference play.

It will take an undefeated season with impressive wins over Oklahoma and Louisville, but Tom Herman has proved as the offensive coordinator at Ohio State and as Houston’s head coach that there isn’t a challenge that a talented team like the Cougars can’t overcome.